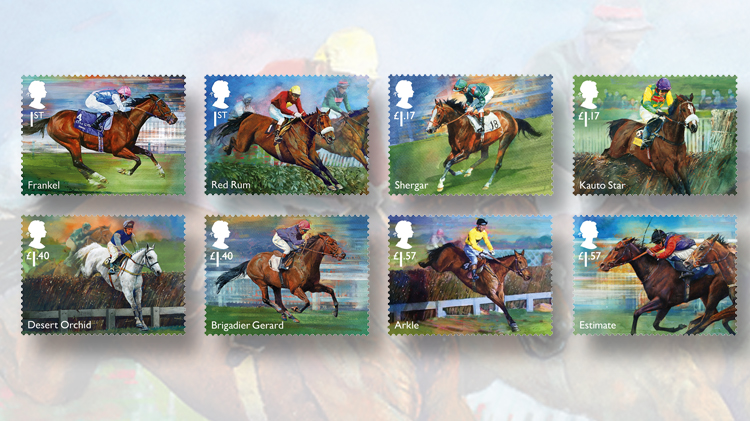 Eight champion horses of the past six decades are honored on Great Britain’s Racehorse Legends set of stamps issued April 6 by Royal Mail.

One stamp of each denomination shows a flat-racing legend, and the other depicts a national hunt legend. As its name suggests, flat racing takes place on a level race course.

In National Hunt racing, the horses jump over obstacles, including hurdles, fences, and water ditches .

Philip Parker, Royal Mail’s stamp strategy manager, said that the horses shown on the stamps have “proven their greatness on UK race courses and won the affection of the public.”

Michael Heslop, an artist known for his equestrian paintings, created the illustrations for the stamps, using photographs from various sources.

Heslop said: “I started painting race horses a long, long time ago. The reason I wanted to paint race horses is, for an artist they have everything; you paint form, you can paint movement. In that one image you’ve got horseflesh and you’ve got the silks of the jockey. Everything in that one image, that is really, really, worth painting.”

Royal Mail said of Heslop’s illustrations for the stamps, “The paintings capture each horse in action, during one of its legendary UK wins.”

Frankel is pictured in action at the 2000 Guineas race at Newmarket in 2011.

In an article in The Telegraph, Marcus Armytage compared this win to the wedding of Prince William and Kate Middleton the previous day, April 29, 2011.

He wrote: “If the royal wedding gave the nation as a whole its feel-good moment on Friday then racing experienced similar emotions at Newmarket on Saturday when Frankel lived up to his billing as the next ‘wonder horse’ winning the Qipco 2,000 Guineas in extraordinary style.”

In the press release announcing the stamps, Royal Mail said: “Frankel was the ultimate racehorse: in 14 flat races over three seasons, he was never beaten and rarely challenged. His style was ruthless, stretching long and low to the ground and powering clear of his rivals.”

Shergar was named the 1978 European Horse of the Year, and his greatest race was the Epsom Derby in 1981. Two years later, in 1983, he was kidnapped from his home in Ireland.

Despite many theories and even fictional accounts of the kidnapping, the case was never solved.

Named after an Arthur Conan Doyle character, Brigadier Gerard won 17 out of the 18 races in his career in the early 1970s. In 1972, he was unanimously voted as Horse of the Year by the Racegoers’ Club.

The stamp pictures Brigadier Gerard’s victory over My Swallow and Mill Reef in the 2000 Guineas in 1971.

Foaled in April 2009, Estimate is the youngest horse included in the set. She is also owned by Queen Elizabeth.

The new-issue announcement said: “Over the last six decades, Her Majesty The Queen’s thoroughbreds have had great success at Ascot, with victories in more than 70 races. Fittingly, in the year in which the 60th anniversary of The Queen’s Coronation was celebrated, Her Majesty would become the first reigning monarch to triumph in the Gold Cup at Royal Ascot, when her mare Estimate won the coveted event in June 2013.”

He was voted the No. 3 favorite horse in a poll of Racing Post readers, and, in 2014, was named the greatest Grand National horse of all time in a poll by Crabbie’s (a sponsor of the race) and Timeform.

One of the top-rated steeplechasers, Kauto Star is pictured in the King George VI Chase of 2009.

Kauto Star died in 2015, just a few years after retiring. In reporting his death, Armytage, writing for The Telegraph, said: “The 15-year-old, whose last race was in the 2012 Cheltenham Gold Cup, a race he had won twice, was trained by Paul Nicholls to win King George VI Chase at Kempton a record five times and won £2.38 million in prize-money, an outstanding amount for a gelding running under National Hunt rules.”

Desert Orchid and Arkle were voted the No. 2 and No. 1 horses, respectively, in the Racing Post poll.

Nicknamed “Dessie,” Desert Orchid raced from 1983 to 1991, winning 34 times. According to Royal Mail, his victory in the 1989 Cheltenham Gold Cup has often been voted one of the most emotional horse races of all time.

J.A. McGrath, horse-racing commentator for The Telegraph, said, “ ‘Dessie’ was a true steeplechasing legend. No matter what the distance, the grey always ran his heart out, and the cheers willing him to his hard-fought win over Yahoo [in the 1989 Cheltenham Gold Cup] will never be forgotten.”

The Irish thoroughbred Arkle won 27 of his 35 starts from 1963 through 1966. During that time, he also became a celebrity, receiving fan letters, gifts of Guinness beer and other items, and even requests for autographs.

Nicknamed “Himself,” Arkle has been described as the greatest steeplechaser of the 20th century, according to Royal Mail.

Royal Mail said, “His first Cheltenham Gold Cup was a dramatic win as he dethroned Mill House and showed his greatness for the first time.”

The firm Together Design designed the stamps. International Security Printers printed them by offset in sheets of 50 (sold in panes of 25 at most postal outlets).

Royal Mail’s other products for the Racehorse Legends set include first-day covers, eight postcards reproducing the designs of the stamps, and a presentation pack with mint examples of the stamps and text by British horse racing journalist and television presenter, Brough Scott.