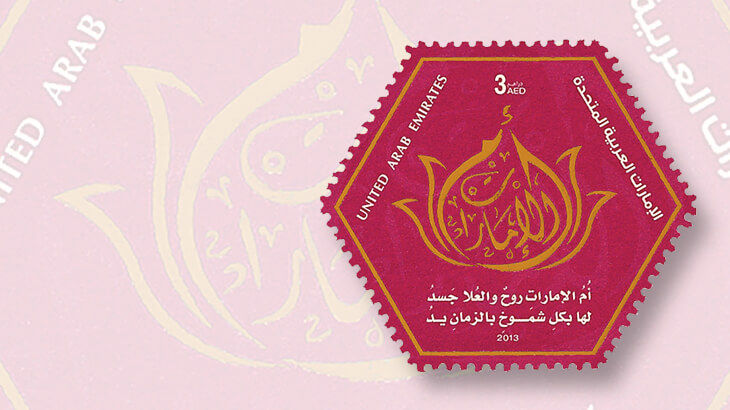 In 2013, the United Arab Emirates issued a world-record-size stamp, larger than 4 feet high and 3 feet wide, repeating the design of this stamp for International Mother’s Day. 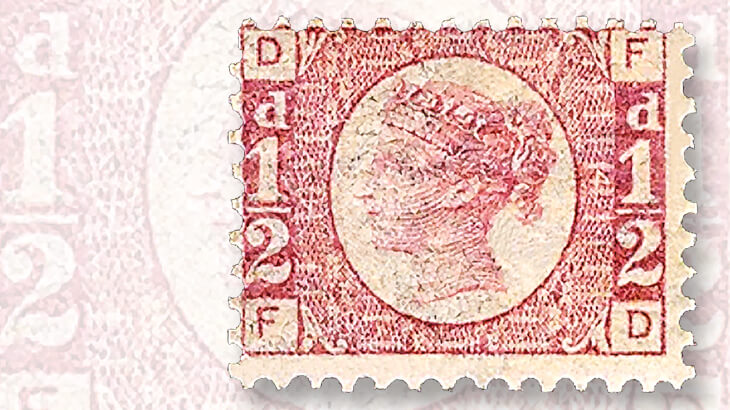 A tiny Great Britain 1870 ½-penny stamp pictures Queen Victoria. Despite their size, the stamps have the corner letters that are standard on their larger counterparts. 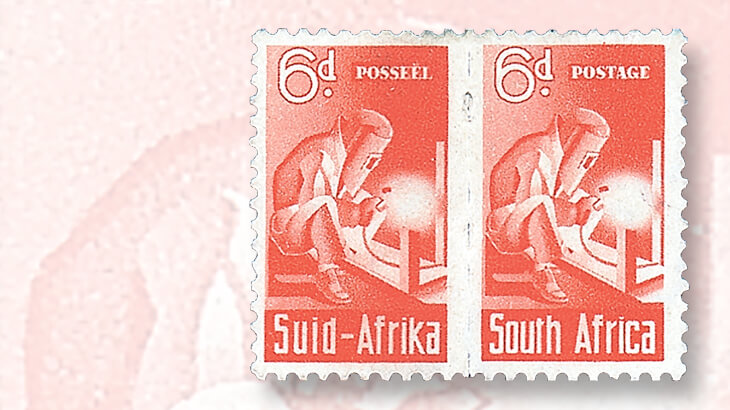 Small stamps of South Africa, issued in 1942, helped to conserve paper during wartime shortages. They are nicknamed “bantam.” 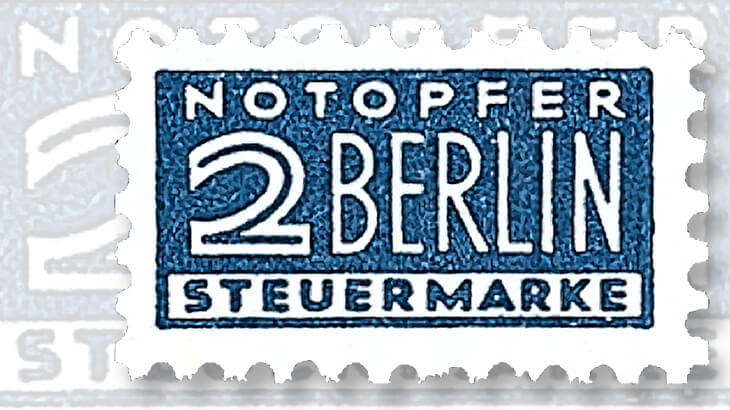 To help economically destitute West Berlin in 1948, Germany issued postal tax stamps, which were required on most mail as a fundraiser. The very small stamps are nicknamed “blue fleas.” 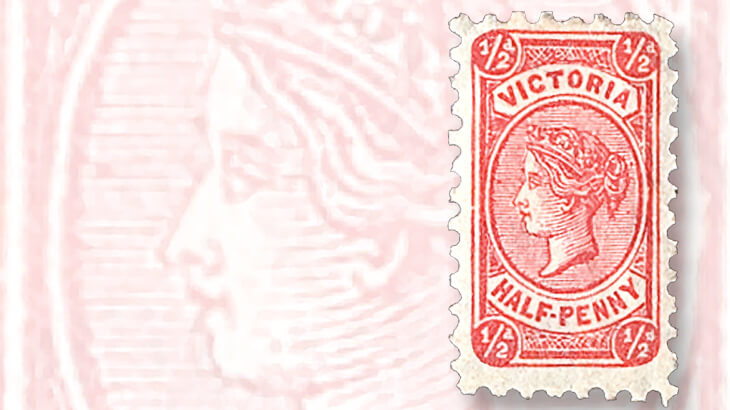 Stamps picturing Queen Victoria and measuring only ½ inch by ¾ inch were issued by the Australian colony of Victoria in 1874. 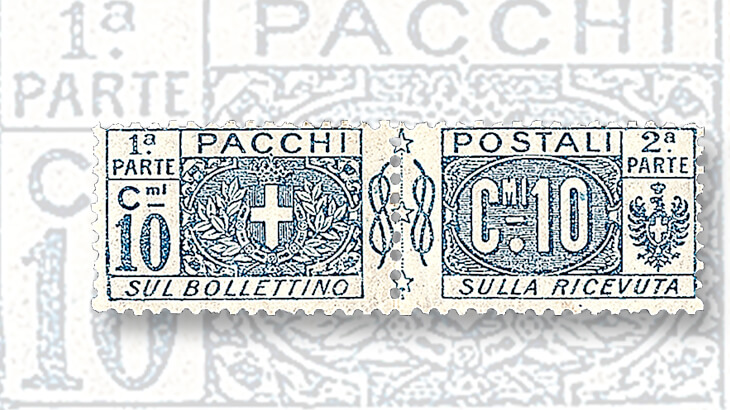 Italy issued tiny but cleverly designed parcel post stamps in 1914. One of the se-tenant stamps remained affixed to the waybill, and the other was on the sender’s receipt. 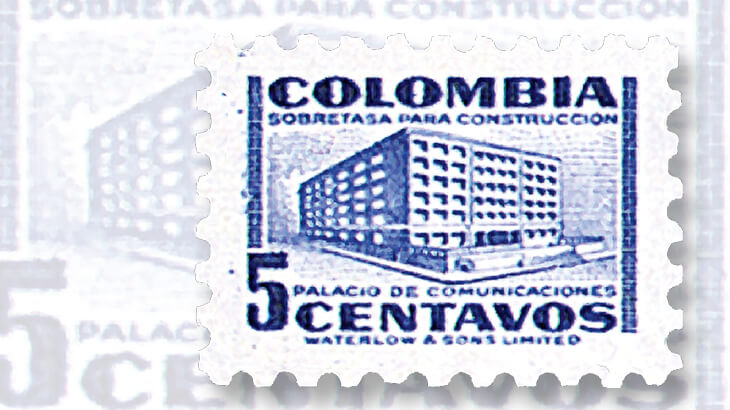 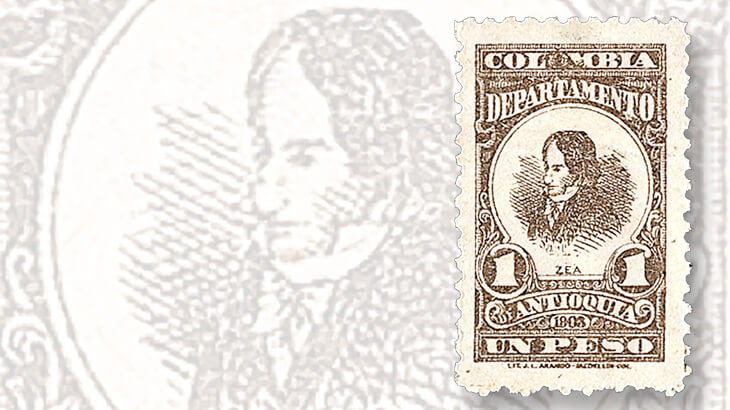 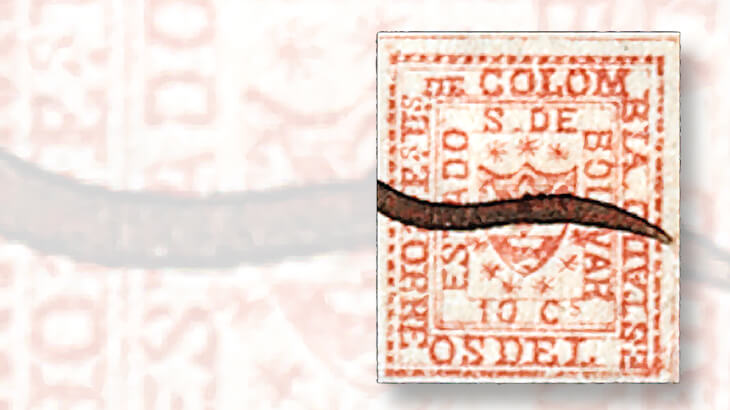 Bolivar, a state of Colombia, issued 10-centavo stamps in 1863 that are less than a half inch long in either dimension. Sometimes they were bisected for use as 5c stamps.
Previous
Next

Have you ever heard the phrase, “about the size of a postage stamp”? In reality, postage stamps can be very little or startlingly big. Let’s have a look.

There have been many larger-than-normal stamps.

On March 21, 2013, the United Arab Emirates issued a hexagonal stamp for International Mother’s Day. The 3-dirham stamp (Scott 1075) was issued in panes of 12.

A variety of this stamp was created that is 4.46 feet high and 3.83 feet wide. This stamp is recognized by Guinness World Records as “the world’s largest postage stamp,” according to Emirates National Records.

You can see the big stamp and read about it online here. Click the link for “World Records” and then for “The largest postage.”

That stamp is far too big for our stamp albums, so let’s move along to the little stamps.

How about starting a new collection of tiny stamps? It is a specialty you might not have considered.

For the most part, tiny stamps are readily available, and many of them are not terribly expensive.

A few of them are pricey but, nevertheless, chasing the little stamps is a fun way to collect.

Colombia has issued several small stamps. Many of these are postal tax stamps, while others are regular stamps of the various United States of Colombia.

A postal tax stamp indicates payment of a mandatory tax on mailed letters, as required by some governments.

There are several tiny vertical stamps from the Colombian state of Antioquia depicting diplomat and statesman Francisco Antonio Zea in the vignette (central image of the stamp). These are Scott 152-157, issued in 1903-04, which measure only 1 inch high and ½ inch wide.

This ministamp has an additional Scott minor number of 2a, for a diagonal half used as a 5c franking on cover. Imagine bisecting this tiny stamp and affixing it to an envelope.

And, yes, there are some tiny stamps from Colombia that are regular postage stamps; for example, Scott 601, a little 5c stamp issued in 1952 and picturing the government communications building. You could call this a “bigger little stamp,” at ¾ inch wide and ½ inch high.

In 1948, Germany issued postal tax stamps to raise funds to subsidize West Berlin, which was destitute. The Notopfer Berlin (Berlin emergency levy) required the use of a 2-pfennig postal tax stamp on virtually all types of internal mail in West Germany between Dec. 1, 1948, and March 31, 1956.

The tiny dark blue stamps, approximately ½ inch by ¼ inch, have been nicknamed the “blue flea” issue because of their size.

Queen Victoria was shown on a tiny stamp in 1870: a ½-penny stamp (Scott 58) issued Oct. 1. Despite their small size (¾ inch by ½ inch), these stamps have the corner letters standard to early British stamps, which identify a stamp’s position on the printing plate.

A sheet of these small stamps consists of 480 stamps arranged in 20 rows of 24 stamps.

This is the smallest stamp issued by Great Britain and has been given the nickname “bantam,” a term originally used to describe small-breed chickens.

For those who like plate numbers, they are found on these British Bantam stamps between the vignette and the numeral “1” on the right and left sides. The plate numbers are difficult to see but add to the challenge and interest of your collection.

Little stamps issued by South Africa in 1942-43 (Scott 90-97) also received the moniker “bantam.” These little stamps are 1 inch by ½ inch and were issued in strips of three. Several of the set have bilingual inscriptions, in English and in Afrikaans. Collecting the stamps in pairs or strips of three is the best way to keep them.

Like so many nations that issued small stamps, South Africa printed its Bantam stamps to save paper during World War II.

Italy issued tiny se-tenant parcel post stamps (Scott Q7-Q19) from 1914-22. The conjoined stamps were cleverly designed so that one of the stamps remained on the parcel’s waybill and the other was affixed to the sender’s receipt. Each stamp measures slightly less than 1 inch by ½ inch.

They may be small, but intriguingly tiny stamps can be of large collectible interest.