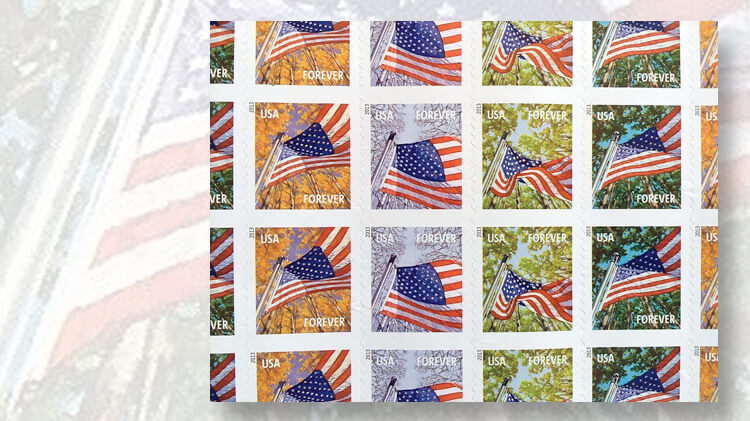 In this close-up illustration, cropped from the intact strip of 700 Flag For All Seasons coil stamps, the lack of horizontal rouletting between the attached coil rolls is easily seen. 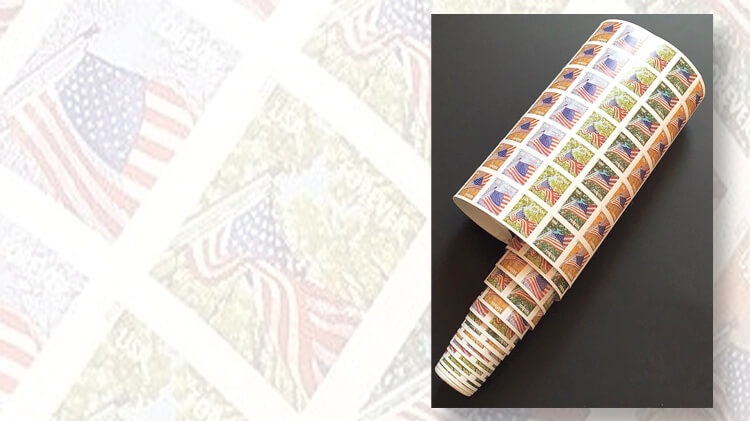 An unusual new error of the Sennett Security Products-produced United States 2013 Flag For All Seasons coil stamps surfaced on eBay in mid-March: a continuous strip of 700 stamps (seven rolls of 100) with normal vertical die cuts but missing the horizontal rouletting that allows individual rolls of 100 to be separated from a normal “stick” of 10 rolls.
Previous
Next

After more than a quarter of a century of normal production of so-called “sticks” of United States coil stamps, a new type of error recently surfaced.

A continuous strip of seven vertically attached coil rolls of 100 Flag For All Seasons Forever coils (700 stamps, Scott 4774-4777) was offered in mid-March on the eBay online auction site.

The stamps were vertically die-cut normally between, but were not slit into individual rolls during the finishing process.

Thus, large blocks of stamps that are imperforate horizontally could be obtained, including three with plate numbers (S1111). This type of multiple would not normally be possible with rolls of coil stamps sold in sticks.

According to the seller’s description, “I bought these stamps many years ago with the intention of using them as postage. Being somewhat of a stamp collector myself, and detecting that there was NO HORIZONTAL CUT separating the seven (7) coils, I decided to keep them and sell them at a later time knowing that errors such as this sometimes draw the interest of some collectors.”

Neither the seller nor the buyer could be reached for further comment.

Considering the number of stamps involved (seven full rolls of 100), this could be considered a bargain, provided no more turn up.

Because the stamps were issued in 2013, additional finds seem unlikely. Indeed, a few days after the close of the auction, during the St. Louis Stamp Expo, dealer Dana Okey (the purchaser) was wholesaling strips of four by seven (28 stamps) to other dealers for $750 each (plate-number multiples were more expensive).

Without figuring a premium for the plate-number strips, this works out to $18,750 as a wholesale cost for the entire item. Retail, of course, would be considerably higher, particularly if the multiples are broken down further, into blocks of eight, 12, or 20, which is entirely likely.

Stamp sticks — or “logs” as they are sometimes referred to — are a type of coil produced only by Sennett Security Products (now part of Banknote Corporation of America), where 10 rolls of coil stamps remain attached, partially separated by a form of rouletting that allows postal clerks to snap off individual rolls of 100 coil stamps for customers.

In the case of the newly discovered error, at least part of the stick (seven of 10 rolls) never received the horizontal rouletting necessary for separation of single rolls.

Stamp sticks were first distributed in 1991 with the release of the 29¢ Tulip rouletted coil (Scott 2525).

Collectors became more acutely aware of them during the 1992 World Columbian Stamp Expo, when they were given out in the form of test coils by Sennett.

Numerous coil stamps produced by Sennett since then have been distributed to post offices in this format.

The Scott editors have reviewed the information regarding this error and have determined that it will be listed in the 2018 Scott Specialized Catalogue of United States Stamps and Covers, which will be published in October.