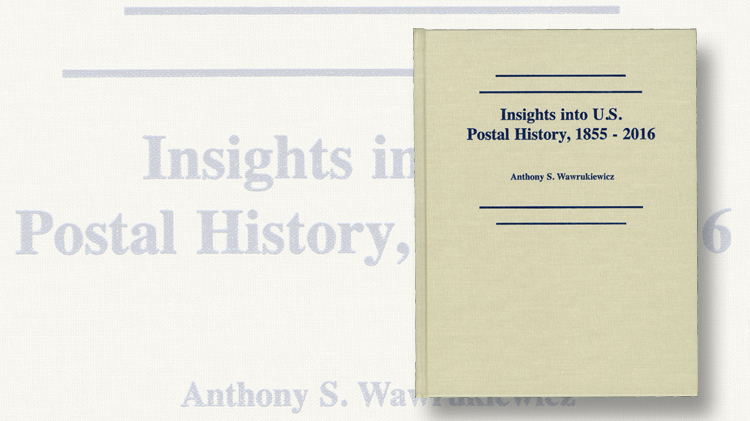 Tony Wawrukiewicz, Linn’s Modern U.S. Mail columnist, has published a new book any dedicated postal historian should have: Insights into U.S. Postal History, 1855-2016. The book is available from the American Philatelic Society.

In December 1999, nine months after I was hired as an associate editor for Linn’s Stamp News, I began writing a monthly column focused on United States postage stamps denominated in dollars.

The column was originally titled Dollar Signs; several years ago, in a nod to the needs of the online/digital age, the name changed to Dollar-Sign Stamps.

My budding interest at the time in modern U.S. postal history spurred me to create the column, and I soon began seeking out covers that would illuminate how dollar-denominated stamps were/are used in the mail.

The U.S. domestic rates book is now in its third edition; the title remains the same, except for the range of years tacked on at the end: 1872-2011.

Linn’s readers will know his name, because it appears as the byline under his monthly Modern U.S. Mail column.

I met Wawrukiewicz (“Tony W,” to many in the hobby who know him well) for the first time in August 1999, at the American Philatelic Society Stampshow in Cleveland.

It didn’t take me long to realize that he was (and still is) a passionate collector and researcher of U.S. postal history in all its myriad aspects.

During the ensuing years, Wawrukiewicz has continued to write and publish at an impressive rate.

His latest effort, Insights into U.S. Postal History, 1855-2016, takes its inspiration, in part, from queries received from collectors about unusual covers.

Being a stickler for accuracy and precision, Wawrukiewicz then methodically unraveled the mysteries behind these postal artifacts and then published his findings in Modern U.S. Mail and elsewhere.

As he observes in the introduction to his new book, however, “the information does not always reach the intended audience. For this reason I am publishing the results … in this book.”

Thirteen topics of particular interest to Wawrukiewicz, each in their own chapter, form the nucleus of the book.

The second chapter, “Held For Postage Mail and Related Markings, 1855-1958,” is co-authored by Wawrukiewicz, Leonard Piszkiewicz, Thomas Breske, and the late David Straight.

Wawrukiewicz is the sole author of the remaining 11 chapters.

Topics include (but are not limited to) held for postage mail (an illustration-rich subject), attempted use of invalid postage, U.S. domestic and international airmail forwarding, and use on international mail of the A- through G-rate definitive stamps.

A straightforward methodology is followed: brief citations from relevant sources, amplified with explanations and numerous color illustrations of covers documenting key aspects of the chapter subjects.

Each picture is identified by a figure number referenced in the text, which makes for easy cross-referencing and minimal page turning while reading.

Captions are clear and, for the most part, succinct. If you don’t want to do a deep dive with a particular topic, skim the captions; they will give you a basic grounding.

After decades of collecting, Wawrukiewicz, as you might guess, has amassed an impressive assemblage of postal history. Many of his covers serve as illustrations, as indicated by the parenthetical “Author’s Collection” often seen at the end of the captions.

One incongruous quirk of the book, as Wawrukiewicz points out in the introduction, results from his intentionally beginning each chapter on a right-hand (odd-numbered) page.

“Therefore, of necessity, there initially were a number of blank even pages — so I have filled them with some of my favorite photographs,” he writes.

I expected to see more interesting covers, but Wawrukiewicz chose instead to feature some of his nature photos. This occurs only after the introduction; chapters 3, 5, 6, 12, and 13; and appendix 1.

Beautiful though they are, readers would have been better served had these pages provided philatelic content.

A vital strength of the book, as it turns out, is appendix 1, titled “Errata from Various Editions of: Wawrukiewicz — Beecher Rate Books.” The specific books are the first three editions of the domestic rate book (1993, 1999, and 2011), and the international rate book (1996).

Postal historians attempting to rate covers will be pleased to have all these corrections grouped in one place.

Readers who want to pursue their own research will find the second appendix most useful. Here Wawrukiewicz details the key sources (such as the Postal Bulletin and U.S. Postal Laws and Regulations) and how to access them.

In one instance (the U.S. Official Postal Guide), Wawrukiewicz offers to send the contents to anyone who provides him with a 64-gigabyte flash drive. He states that the Postal Guide eventually will be available for downloading.

In the meantime, those desiring to take advantage of Wawrukiewicz’s offer should send an e-mail to tonywaw
@spiritone.com.

A cursory overview such as this can’t do justice to the wealth of information that Wawrukiewicz has packed into the book’s 234 pages.

If you, like this reviewer, are drawn to U.S. postal history and its nuances, you’ll want this book for your philatelic library.

Insights into U.S. Postal History, 1855-2016 was published by and is available from the American Philatelic Society.