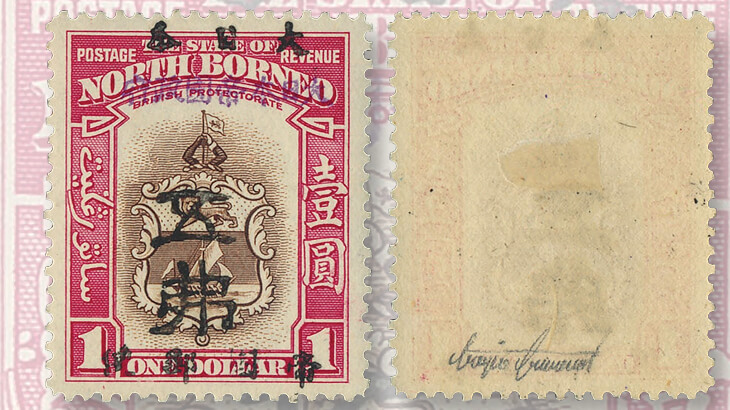 Among the top lots from Raritan Stamps’ March 3-4 auction was a scarce survivor of Japan’s World War II occupation of the British colony of North Borneo, now part of Malaysia. Signed on the back by expert Sergio Sismondo, the unused stamp went to a new ho

Among the top lots was a scarce survivor of Japan’s World War II occupation of the British colony of North Borneo, now part of Malaysia.

Early in 1942, Japan took over the territory, which had been a British colony since the 1880s, and overprinted the previous colonial stamps with the words “Imperial Japanese Postal Service North Borneo” in Japanese characters.

In 1944, two of the stamps were further surcharged with high denominations. One of these (Scott N31a) bears both an earlier single-line overprint in violet and the $5 surcharge in black.

The unused example in the Raritan sale, signed in pencil on the reverse by expert and Linn’s Unveiling Classic Stamps columnist Sergio Sismondo, was described as “the best preserved” of the few examples known. It sold for $9,200, including the 15 percent buyer’s premium added by Raritan.