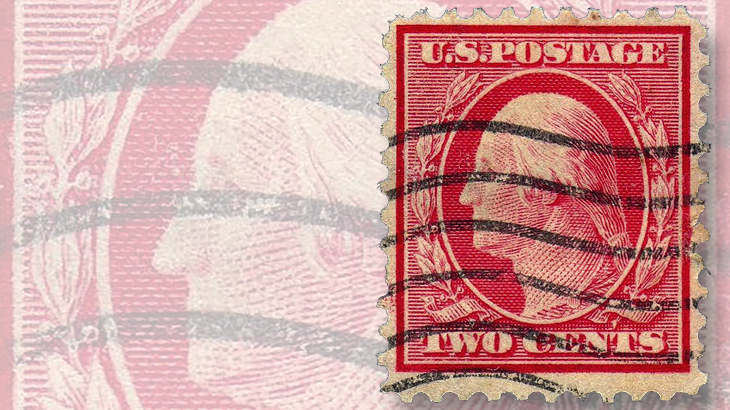 Among 20th-century issues in the Fusco sale was a scarce 2¢ from the Washington-Franklin series of 1908-20. The variety, Scott 519, produced from a leftover supply of the original “TWO CENTS” stamps on double-line “USPS” watermarked paper taken from stora 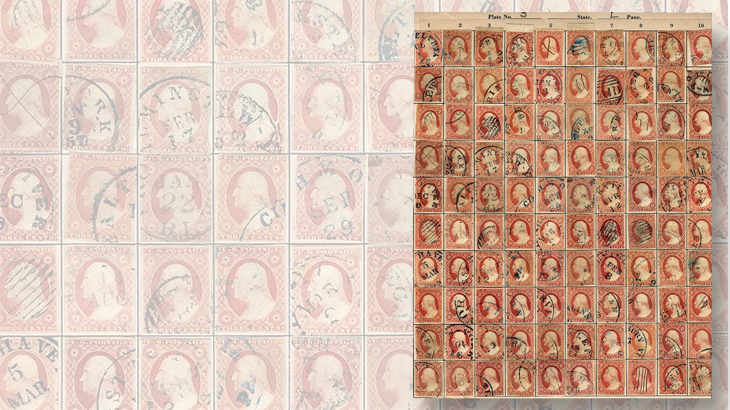 Another 3¢ Washington highlight of the Fusco sale, sold for just $488.75, was a complete reconstruction of plate 3 (both left and right panes of 100) of Scott 11A. The reconstructed left pane is pictured. Collectors, over the years, have made a specialty 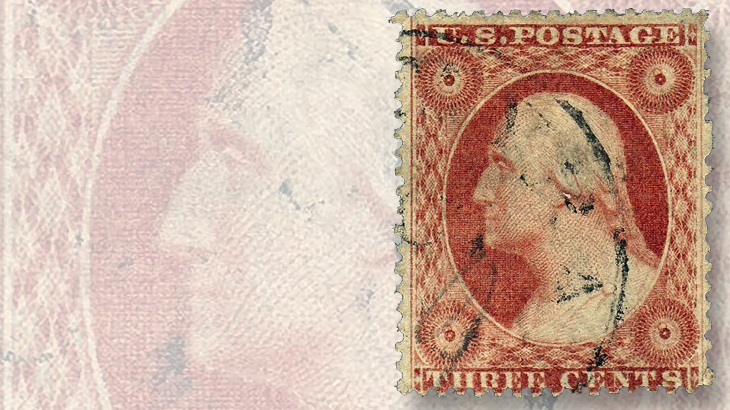 This 3¢ Washington plate variety, from position 87 of the right-hand pane of plate 15 (87R15 in collector shorthand) sold for $603.75 during the Fusco March 26 sale.
Previous
Next

The firm of Fusco Auctions, in Willoughby, Ohio, held a sale of stamps and collections on March 26 that featured plenty more fun with the 3¢ Washington.

Three cents was the basic domestic letter rate beginning in 1851, so the 1851-57 3¢ Washington stamp, in both imperforate and perforated versions, served as the postal workhorse for the better part of a decade.

More than a billion of the stamps were printed using 29 different printing plates, each composed of left- and right-hand panes of 100.

Tomes have been published on the finer details of this stamp, and collectors with a taste for flyspecking have, over the years, made a specialty of reconstructing its printing plates with single, used examples, which are relatively common and (for the most part) inexpensive.

Plate reconstruction, or plating, is accomplished by examining each stamp in minute detail to spot telltale differences in various parts of the design — here a stray scratch or dot, there a recut line or re-entry of the design into the plate — until all positions (5,800 in the case of the 3¢ Washington stamps) are identified and put together. It is the ultimate philatelic jigsaw puzzle.

Many years ago, the Smithsonian Institution acquired the collection of Carroll Chase, one of the earliest and most ardent of the plating fanatics.

Photographs of Chase’s collection of 1851 3¢ platings are offered for sale by the Smithsonian, reportedly for $500, as a guide to those wishing to repeat the feat.

A set of the 11-inch-by-14-inch photos of the nine plates used for the imperforate 3¢ Washington was offered by Fusco and sold for $460, including the minimum 15 percent buyer’s premium added to all lots.

The following lots in the sale included a handful of 3¢ plating collections and partial accumulations, each with its own strengths and bonuses.

One lot comprised the complete plate 3, both left and right panes (200 stamps; the left pane of 100 is illustrated) of Scott 11A.

Plate 3 is one of the more popular plates because the rightmost three vertical rows show an abundance of missing and extra frame-line varieties, many of which are listed separately in the Scott Specialized Catalogue of United States Stamps and Covers. The lot sold for $488.75.

Some of the individual 3¢ Washington stamps of 1851-57 have notable distinguishing features that command a hefty premium.

One of these, position 87 from the right-hand pane of plate 15 (noted as 87R15) shows a heavy re-entry where the die with the stamp design was pressed into the printing plate a second time, in a position that didn’t quite line up with the first entry.

The re-entry is most obvious in the corner rosettes, where there is a ghostly “o” above the dark circle in the center of the rosette. There is also a subtle line through the words “U.S. POSTAGE” and “THREE CENTS”.

The lightly canceled example of this perforated stamp, a listed variety of Scott 26, was sold by Fusco for $603.75.

Among 20th-century issues in the Fusco sale was a scarce 2¢ from the Washington-Franklin series of 1908-20.

The 1¢ and 2¢ stamps in the series originally appeared with a double-line “USPS” watermark and the denomination spelled out in words, “ONE CENT” and “TWO CENT”.

This was changed after the first couple of years to redesigned versions reading “1 CENT 1” and “2 CENT 2”. The watermark was also changed to a single-line “USPS”.

All of the early issues were perforated gauge 12 (or left imperforate).

Toward the end of the series, a leftover supply of the original “TWO CENTS” stamps on double-line “USPS” watermarked paper was taken from storage and perforated to be put on sale. By then, however, production had switched to using a perforator measuring gauge 11.

The resulting variety (Scott 519) is one of the scarcest of the Washington-Franklin series, especially so with a genuine, contemporaneous postmark. Certification by experts is always recommended.

The example in the Fusco sale, with a small fault but accompanied by a certificate from the American Philatelic Society’s expert committee, sold for $253.