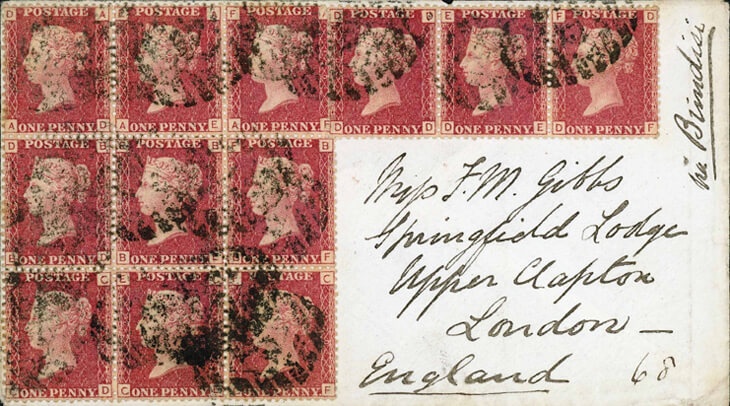 This impressive multiple-franking cover in the Cavendish sale, plastered with a dozen Penny Red stamps, traveled in 1872 from Zanzibar to London. Part of the Joseph Dallin Paul correspondence, it realized almost $1,700. 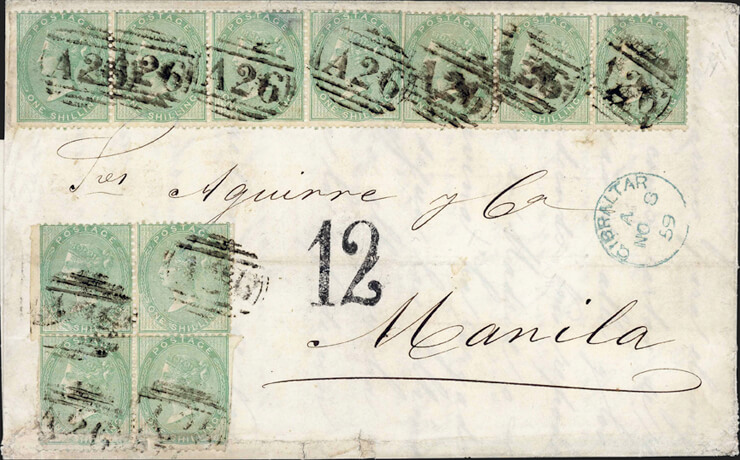 Eleven 1-shilling Queen Victoria stamps paid the postage on this 1859 cover that traveled from Gibraltar to Spanish colonial Philippines. “Probably the record franking” of any Victorian-era mail from Gibraltar, according to Cavendish, the cover sold for about $3,375. 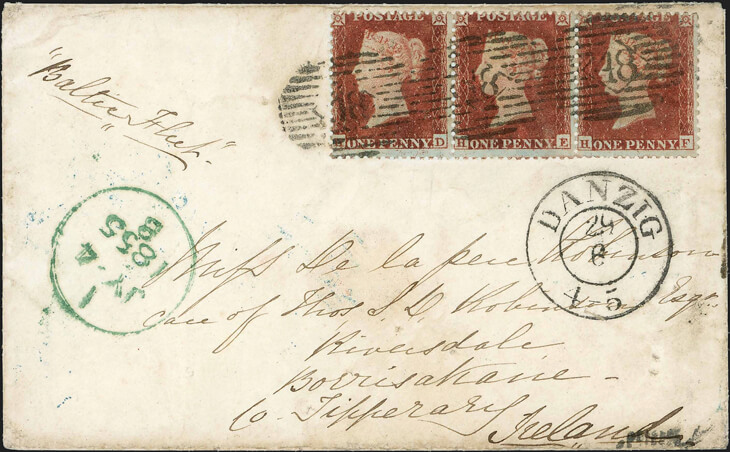 During its March 15-16 sale, Cavendish Auctions offered this splendid 1855 cover, an artifact of the Crimean War sent from a British naval vessel stationed off East Prussia. Franked with a trio of Penny Red stamps, it found a new home for $1,000.
Previous
Next

Not surprisingly, given the sheer number of such actions, many short-lived or playing out in remote corners of the world, the majority have slipped into historical obscurity, remembered nowadays only by Chelsea Hospital pensioners and dedicated postal historians.

One such operation was the Anglo-French blockade of the Baltic Sea during the Crimean War in 1854-55. Even Wikipedia refers to it as “a forgotten theater” of that conflict.

The Crimean War involved Russia attacking the Ottoman Empire, and most of the action took place around the Black Sea, particularly on the southern Ukrainian peninsula of the Crimea.

It might have remained a regional conflict, had not the Turks’ European allies, seeking to maintain a balance of power in the world, come enthusiastically to their aid.

Britain and France decided it would be useful to attack Russia from the north, so they commenced shelling several Russian ports around the Baltic Sea. At the time, the Russian empire incorporated Finland as well as the modern-day Baltic republics of Estonia, Latvia, and Lithuania, so there were plenty of available targets.

A Russian fortress on the islands of Aland, between Sweden and Finland, came in for attack in 1854, and on one memorable day in 1855, the British and French navies unloaded some 1,100 tons of ordnance onto the fortress at Sveaborg, outside Helsinki, apparently with minimal effect.

The harassment in the Baltic ended up having no great military impact, but it did hinder the Russian economy, and therefore probably helped shorten the war. It also produced a few good pieces of postal history.

One in particular was offered by Cavendish Auctions during a March 15-16 sale at the firm’s headquarters in London.

The cover, endorsed “Baltic Fleet,” was sent from a British naval vessel stationed off East Prussia, today part of coastal Poland. It was postmarked first in Danzig (now Gdansk) June 29, 1855, before being taken to London, where the three Penny Red stamps (Scott 11) were obliterated.

The letter traveled onward to Dublin, where a green datestamp was applied, and arrived at its destination in Tipperary, Ireland, about a week after being sent.

Described as “fine and rare,” it went for the equivalent of $1,000, including the 20 percent buyer’s premium added by Cavendish to all lots.

The sale included an extensive run of British postal history originating from other countries.

For much of the mid-19th century, before the Universal Postal Union streamlined international mail handling, Britain maintained a network of postal agencies around the world.

Many of these were forerunners of British colonies’ own issues, though others were in independent states such as Chile, Haiti, and Siam (Thailand).

One cover Cavendish offered traveled from Gibraltar, the British outpost in southern Spain at the mouth of the Mediterranean, across the globe to Manila in what was then Spanish colonial Philippines.

The entire folded letter was franked with a whopping 11 shillings, made up of as many examples of Britain’s then-current 1sh stamp without corner letters (Scott 28). It would be another 27 years before Gibraltar first issued its own stamps.

The stamps are obliterated with the barred-oval “A26” numeral cancel assigned to Gibraltar.

A blue circular datestamp alongside gives the name of the colony and the date, Nov. 8, 1859, and additional datestamps on the reverse track its journey via Hong Kong to Manila.

On arrival, the letter was marked with a large, black “12,” indicating the amount due in Spanish reales for delivery within the Philippines.

“Probably the record franking” of any Victorian-era mail from Gibraltar, according to Cavendish, the cover sold for about $3,375.

Another overseas cover with a plethora of stamps on it demonstrated the value of doing one’s homework when it comes to postal history.

A clean cover plastered with 12 Penny Reds showing letters in all four corners (Scott 33, plate 120) was addressed to “London, England” and endorsed “Via Brindisi” in the upper right corner, indicating that it arrived from outside the country.

The port of Brindisi, in southern Italy, was a common waypoint for mail to and from the Mediterranean and points beyond.

In pre-UPU days, senders could often choose the route their letters would take when mailing them, and the rates sometimes changed accordingly.

Mail via Brindisi typically cost less and traveled faster between Alexandria and London than via Marseille.

But where did this letter originate? The stamps are canceled with a generic “P” in a barred numeral, applied on arrival at the Foreign Branch in London, and the reverse gives only an East London receiving mark of September 1872.

Interestingly, the number “68” on the bottom-right corner offers a clue. The letter is from a long correspondence, and in this case can be traced to one Joseph Dallin Paul.

One of the cover’s previous owners, Geoff Osborn, documented the correspondence and traced Paul’s genealogy.

Osborn determined Paul had served on HMS Glasgow, and that the ship was stationed in Zanzibar at the time the letter was sent. Mystery solved.

The mail would have traveled in a closed bag on another ship going back to the Mediterranean.

The cover sold for just under $1,700, almost 30 percent over its last realization a decade ago.