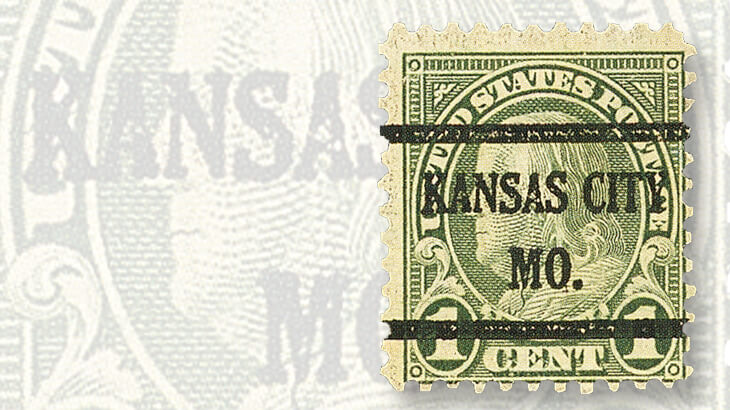 The 1923 1¢ green Benjamin Franklin stamp created from rotary sheet waste and perforated gauge 11 is an important United States rarity. This example will be auctioned by Schuyler Rumsey during the Westpex show in San Francisco. 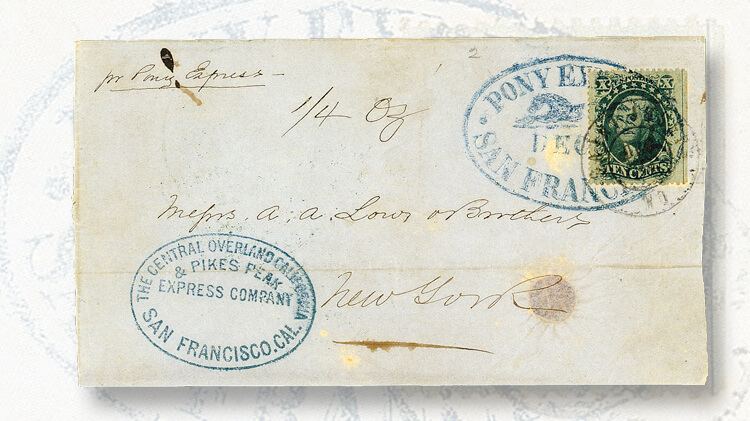 Bold, clear Pony Express strikes are found on this 1860 cover carried from San Francisco. It is among the many postal history offerings in the April 27-30 Schuyler Rumsey auction at Westpex.
Previous
Next

Schuyler Rumsey Philatelic Auctions of San Francisco, Calif., will hold its next public auction in association with the Westpex 2017 stamp show and exhibition.

The auction opens with stamps and postal history of Great Britain and the British Commonwealth, followed by general foreign and continuing into an extensive run of United States postal history and U.S. stamps, including back-of-the-book, possessions, Civil War and Confederate States, and more.

The auction concludes April 30 with a wide range of U.S. and worldwide collections.

A key item among the U.S. stamp offerings is the rare 1923 1¢ green Benjamin Franklin stamp created from rotary sheet waste, perforated gauge 11 (Scott 596). It is one of only 15 recorded examples of this major variety, 10 of which are overprinted with a “Kansas City, Mo.” precancel, as this one is.

According to the Rumsey catalog description, the stamp has rich color with a faint vertical crease at left, “still Fine.”

The Scott Specialized Catalogue of United States Stamps and Covers values this stamp in the grade of fine at $100,000 with the precancel. This example is accompanied by Philatelic Foundation certificates from 1967 and 2008.

An important U.S. production error from 25 years ago is represented in the Rumsey auction in an attractive block of four that illustrates two distinct error varieties.

Two panes of 40 of the 29¢ New York Stock Exchange stamp (Scott 2630) were discovered with each having 28 stamps where the engraved black central design elements are inverted — printed upside down with relation to the rest of the design (Scott 2630c) — and 12 where those black elements are completely missing (2630b).

This four-stamp multiple includes two stamps at right with the invert error, attached to two additional stamps with the color missing error, plus margin paper at left with U.S. Postal Service inscriptions.

Among the other inverts offered in this sale is a 1901 4¢ deep red-brown and black single with center inverted (Scott 296a) — a bottom margin plate number single with siderographer’s initials and lightly hinged original gum.

A standout from the postal history offerings is an 1860 Pony Express cover carried on the Dec. 8 trip from San Francisco, a journey that suffered delay because of snow.

The blue folded cover, addressed to New York, is franked with the perforated 1859 10¢ green George Washington stamp (Scott 35) with guideline straight edge at right. The stamp is tied with a San Francisco circular datestamp and a “bold strike” of the blue Running Pony oval date­stamp.

The cover has a “tiny erosion spot in ink mark,” Rumsey notes, but “no repairs or restoration of any kind.” It is described as very fine, accompanied by a 1984 Philatelic Foundation certificate, and carries an estimate of $20,000 to $30,000.

A significant selection of California postal history in this sale begins with material from the John Drew collection of early California history of Monterey and San Jose, and a 1775 letter from Monterey to Mexico described as “one of the earliest California mission letters in private hands, written only five years after the founding of the mission.”

Choice U.S. revenue stamps on offer include an 1871 $500 second-issue documentary stamp, a well-centered example of the prize known to collectors as the “Persian Rug” (Scott R133). The stamp has a “neat face free circular cut cancel” and rich color; a tiny thin spot is noted, but the stamp is described as “otherwise Extremely Fine” by Rumsey.

Its value in the Scott U.S. Specialized catalog is $17,500. This example is ex-Joyce, Zoellner, and Floyd, and carries a 2001 Philatelic Foundation certificate.