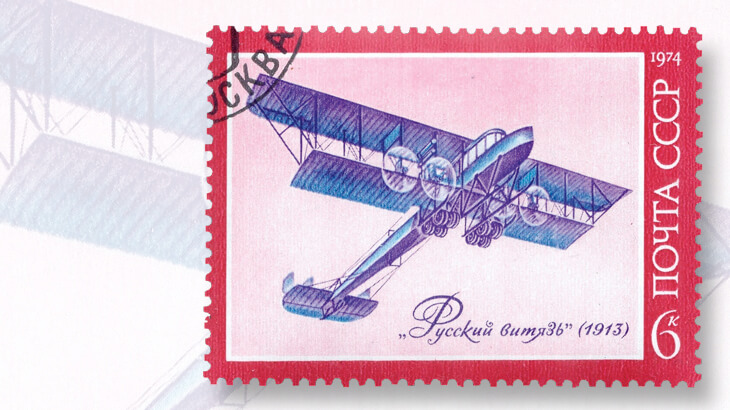 The Russky Vityaz, which first flew May 10, 1913, featured an enclosed crew cabin and passenger compartment. It is illustrated on a 1974 Soviet Union 6-kopeck stamp. 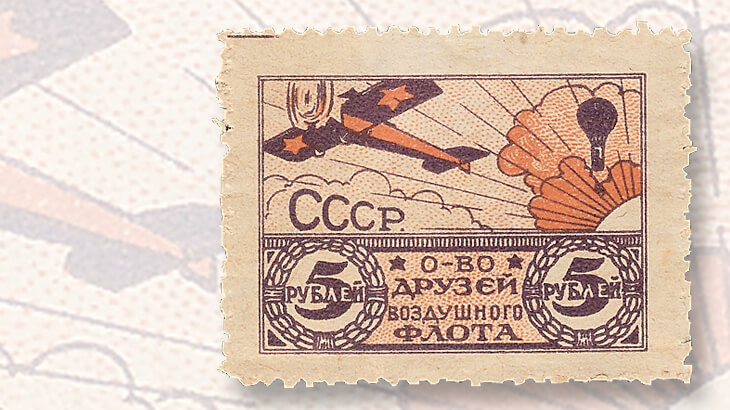 This ODVF 1923 fund-raising label depicting a monoplane is from the first All Union issue. 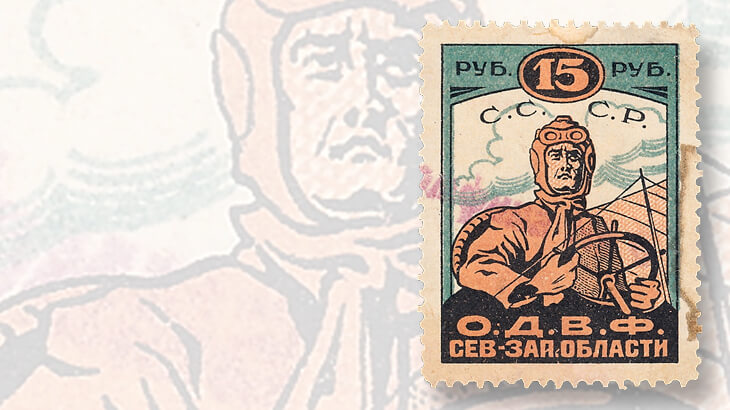 An example of a regional stamp is the ODVF Northwestern Region second-issue 15-ruble label showing an aviator piloting his craft. 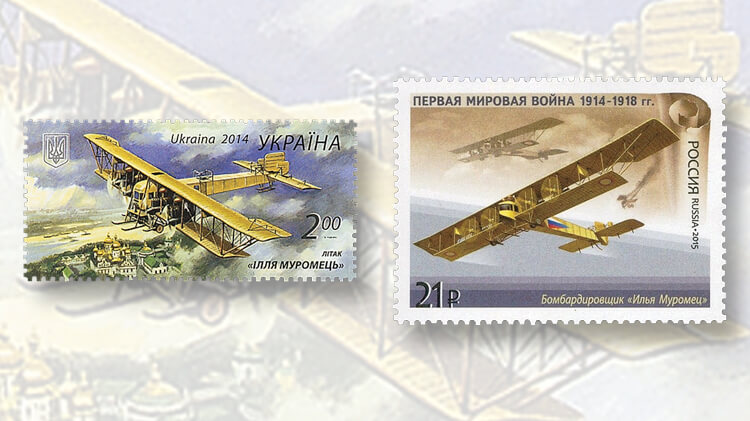 The Ilya Muromets aircraft, named after the medieval warrior-saint folk hero of Kievan Rus, is pictured on a 2014 Ukraine 2-hryvnia stamp, left, and on a 2015 Russia 21-ruble stamp issued in 2015, right. The plane included a passenger salon and washroom. 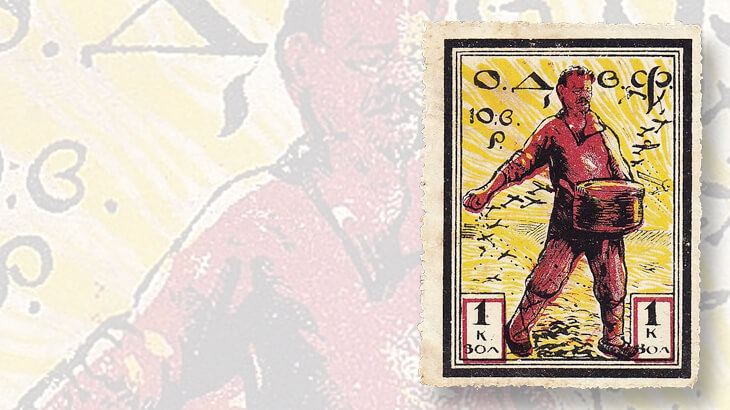 The design of the Rostov-on-Don 5-kopeck Leon Trotsky Sowing Soviet Airpower label shows Trotsky, architect of Red victory in the Russian Civil War, dressed as a peasant sower with a bag of seeds strapped to his body.
Previous
Next

Aviation topical collecting is popular with many stamp collectors. The Union of Soviet Socialist Republics issued some of the most attractive and diverse aviation cinderella stamps.

Collectors call these and other such stamplike labels cinderellas; they have no postal validity.

One type that is especially popular with aviation topical cinderella collectors is the fund-raising labels produced and sold for the Society of Friends of the Air Fleet — Obshchestvo Druzei Vozdushnogo Flota, or ODVF.

Although Russia lagged behind Western Europe in industrialization, by the dawn of the 20th century some strides were being made to catch up.

An area in which Russia was near the leading edge was aviation. This was primarily because of the genius of Ukrainian-born Russian aviation pioneer, Igor Sikorsky.

Sikorsky was multitalented, being a pilot, engineer, designer, and builder of aircraft that were generally ahead of their time. Sikorsky fled the Bolsheviks and came to America in 1919, where he eventually designed and built the first operational American helicopter.

The plane, which first flew May 10, 1913, featured an enclosed crew cabin and passenger compartment. It is illustrated on a Soviet 6-kopeck stamp (Russia Scott 4279) issued Dec. 25, 1974. The stamp, printed by photogravure, is perforated gauge 11½ by 12.

The plane was dubbed Ilya Muromets after the medieval warrior-saint folk hero of Kievan Rus. The improved plane design included a spacious passenger salon with washroom.

When war broke out in August 1914, two Ilya Muromets (S-22) aircraft had been completed, and eight more were under construction. They were immediately pressed into military service as bomber and reconnaissance aircraft.

Eventually, 83 of the four-engine bombers were built. The aircraft provided invaluable service during the war, dropping more than 65 tons of bombs and providing detailed reconnaissance of enemy movements and positions. They were also quite formidable in air-to-air combat.

Only one was ever shot down by enemy aircraft, while many enemy fighters attacking them were shot down.

Most of the heavy bombers developed by Great Britain, Germany, Italy, and France during the war owed a good deal in design concept and engineering to the S-22.

While the war spurred technical innovation and improvement in aviation in Central and Western Europe, it so drained the already chaotic Russian infrastructure that by 1917 Russian aviation production was near collapse.

After the war, the Bolshevik Revolution and Russian Civil War further degraded Russia’s technological and industrial base.

The Imperial Russian Air Service boasted 91 operational squadrons during World War I. During the Russian Civil War, the Red Army had about 300 planes, but shortages of pilots, mechanics, and parts kept most of them grounded.

By the time the Russian Civil War ended in 1923, Russian aviation was back to square one.

It was at this point that the Bolshevik leadership decided to launch a major campaign to build and operate a Red Air Fleet to show the world Soviet technical expertise and military might.

On March 1, 1923, all Communist newspapers and publications began a four-month-long series of articles on the importance of the development of aviation in ensuring the success of the revolution and solidifying the gains of the workers’ and peasants’ society.

On March 9, 1923, the first meeting of the ODVF was held on the grounds of the Moscow Military Academy.

The stated goals of the ODVF included the development of industry, technical research, aviation propaganda, maintenance of aviation records, and publication of aeronautical journals.

To ensure maximum participation and success of the organization, shop stewards, party cells, and political commissars in the military cajoled, persuaded, and threatened those under them into joining.

Often the entire workforces of factories were enrolled together, with shop stewards and administrators serving in the same capacity as officers of the local ODVF.

By August 1923, the ODVF boasted 106,000 dues-paying members with millions of rubles in its coffers.

Labels were produced on the city, regional, and national level, and continued employment, favorable working conditions, and possible promotion often hinged on how enthusiastically a given worker purchased the labels.

The design of a 1923 ODVF 5r label of the first All Union issue features a monoplane with red stars on the wings in the foreground, and a lighter-than-air balloon against the sun breaking through the clouds in the background.

The balloon in the design is evidence of ongoing Soviet interest in high-altitude, lighter-than-air craft used for exploring the stratosphere.

An example of a regional stamp is the ODVF Northwestern Region second-issue 15r Aviator fund-raising label.

The stamp’s design is a striking example of the school of Socialist Realism poster art with the aviator staring determinedly ahead as he pilots his craft using a steering mechanism that more closely resembles a ship’s helm than an aircraft stick.

The Rostov-on-Don 5k Leon Trotsky Sowing Soviet Airpower label is an example of a city issue. The label’s design shows Trotsky, architect of Red victory in the Russian Civil War, dressed as a peasant sower with a bag of seeds strapped to his body.

As he strides across the land, broadcasting seeds, instead of grain, airplanes sprout up and take flight.

ODVF fund-raising labels are avidly collected and often sell in the $10-to-$50 price range. In addition to the labels, the ODVF also produced colorful and attractive posters, badges, pins, and other collectible memorabilia.

In the 1920s, the ODVF provided the framework for establishing, building, and developing Soviet military and commercial aviation.

By the 1930s, the ODVF was rapidly being eclipsed by the Osoaviakhim (Volunteer Society for Cooperation with the Army, Aviation, and Fleet), a paramilitary sports organization for Soviet youth that evolved out of the ODVF.