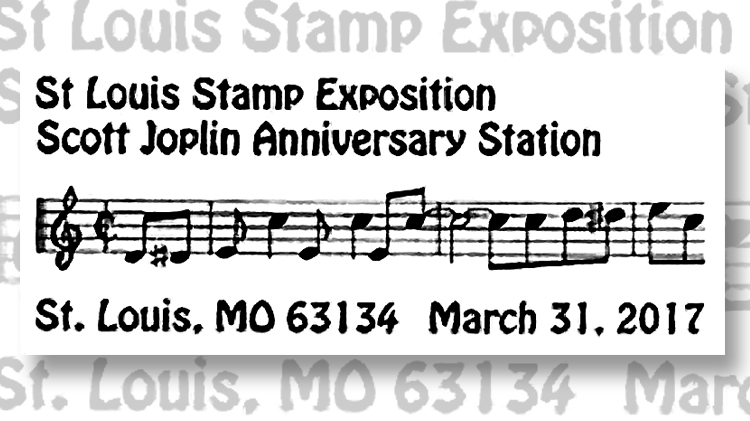 The musical notes in this postmark represent the melody line for The Entertainer, a ragtime composition by Scott Joplin. The postmark commemorates the musician and the St. Louis Stamp Expo.

Most biographies of ragtime musician and composer Scott Joplin agree that the location and date of his birth are uncertain. It is known he was born in 1867 or 1868, most likely in either Texas or Arkansas.

A postmark from St. Louis, Mo., commemorates the well-known composer in association with the March 31-April 2 St. Louis Stamp Expo.

The composer of The Entertainer, Maple Leaf Rag, the opera Treemonisha, and many other works lived in Missouri around the turn of the century, first in Sedalia and later in St. Louis. It was during this time that he wrote and published some of his most famous ragtime compositions.

The musical notation in the postmark is a transcription of the familiar melody line of The Entertainer, a classic piano rag by Joplin from 1902. The song experienced a phenomenal revival after composer Marvin Hamlisch adapted it as the theme for The Sting, the 1973 George Roy Hill film starring Paul Newman and Robert Redford.