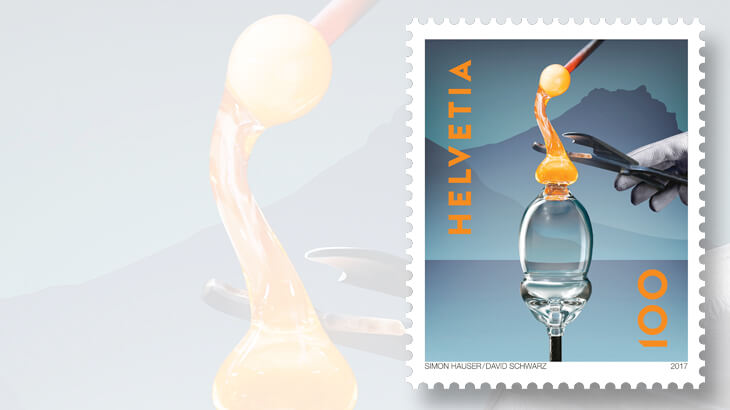 This Swiss stamp marks the 200th anniversary of glass craftsmanship in Hergiswil.

Also, a Baby Animals set was issued at the same time. These four stamps showing a young otter, lynx, wolf and bear include multimedia elements that are activated by using a smartphone with the Post-app.

Three stamps mark the 50th anniversaries of the Swiss Heart Foundation; Piz Gloria, the revolving restaurant perched 9,744 feet on top of Schilthorn; and Schilthornbahn, the cable-car railway that takes passengers to the peak and the restaurant.

Two stamps celebrate the 200th anniversary of the bicycle. One shows a bicycle from a bygone era, and the other depicts a modern bicycle.

The commemorative stamp for Hergiswil, the only remaining glassworks in Switzerland where glass is still produced by hand, is embossed with ultraviolet gloss varnish.

Swiss Post said, “As a seeker of God, mystic and hermit, he became an important adviser and peace broker for the Confederation.”