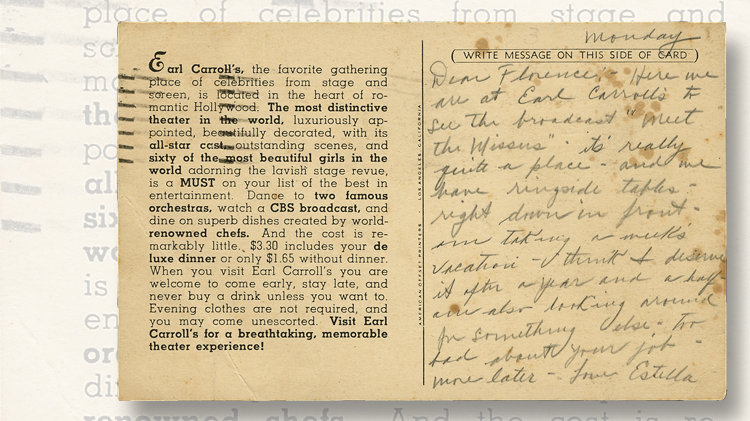 The message side of the Earl Carroll Theatre-Restaurant advertising postcard says visitors should not miss the revue. In 1945, dinner and the show at this Hollywood restaurant cost only $3.30. 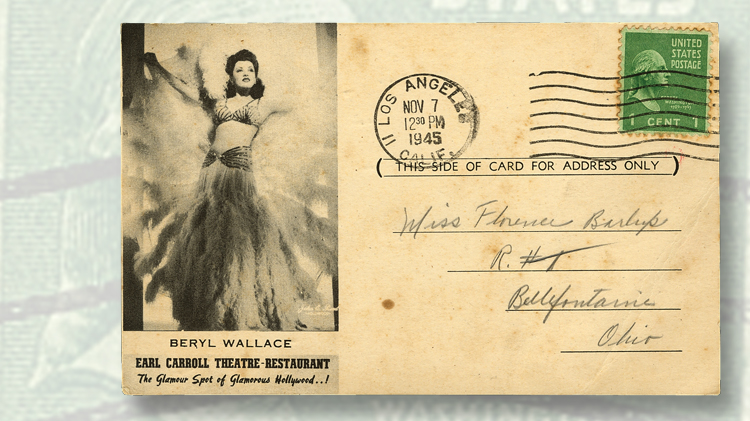 This advertising postcard for the Earl Carroll Theatre-Restaurant “The Glamour Spot of Glamorous Hollywood” was Nov. 7, 1945, from Los Angeles. The card pictures Beryl Wallace, billed as one of “the most beautiful girls in the world.” 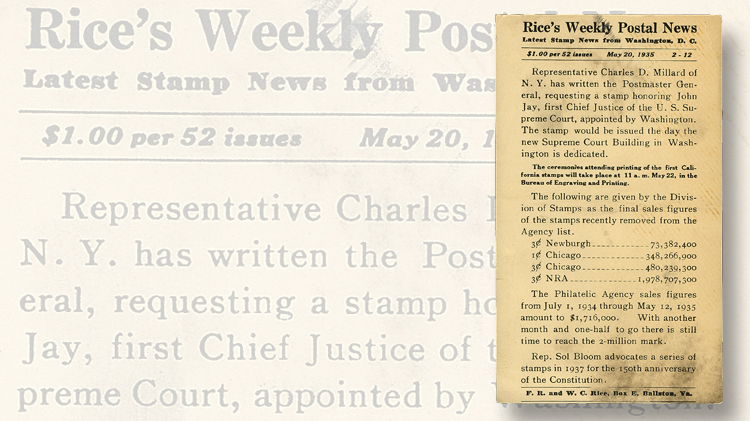 Rice’s Weekly Postal News reported on its May 20, 1935, postcard mailing that a John Jay stamp had been requested, to be issued coincident with the dedication of the Supreme Court Building.
Previous
Next

Gone are the days when a Hollywood dinner and a show cost $3.30, but just such a deal is offered on the back of a postcard canceled in Los Angeles on Nov. 7, 1945.

Pictured on the card is Beryl Wallace, featured in the Earl Carroll Theatre-Restaurant revue.

A singer, dancer and actress, Wallace (1909-1948) was 19 when she landed a roll in the Earl Carroll Broadway theater production of Vanities, which billed itself as featuring the “most beautiful girls in the world.”

She also appeared in six similar productions. She and Carroll began a personal relationship that would eventually take them to Hollywood, where she appeared in her first film in 1934.

Over the next decade, Wallace appeared in more than 20 films, but her primary job was a star entertainer at Carroll’s theater.

The text on the back of the postcard reads in part: “Earl Carroll’s, the favorite gathering place of celebrities from stage and screen, is located in the heart of romantic Hollywood. The most distinctive theater in the world, luxuriously appointed, beautifully decorated, with its all star cast, outstanding scenes, and sixty of the most beautiful girls in the world …

Wallace came to an unhappy end on June 17, 1948.While en route from Los Angeles to New York, both she and Carroll died in the crash of United Airlines Flight 624 in Wilburton, Pa.

The aircraft struck a transformer while coming in for an emergency landing caused by a fire that had broken out on the plane. About 95 pounds of mail was salvaged from the plane.

Covers from the flight can be found today, handstamped either “delay due to air mail interruption near Mount Carmel Penn June 17, 1948” or “Received in bad condition at Pottsville, Penna.”