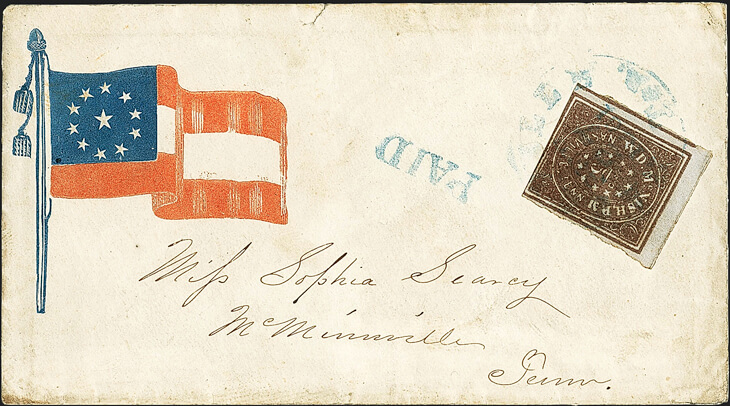 The winning bidder at Siegel’s March 3 auction of Civil War and Confederate States paid $31,860 for this 1861 patriotic cover franked with a 5¢ violet-brown Nashville postmaster’s provisional. The scarce 11-star Confederate flag cachet is rare and sought after.

On March 3, Siegel offered Civil War and Confederate States postal history. A rare patriotic cover from Tennessee was the standout item to cross the auction block.

U.S. stamps were invalidated for use in the South during the war, so to get by until the Confederacy began printing stamps, many local postmasters all across the South put out their own. These Confederate postmasters’ provisionals, as stamps and postal history, form a rich collecting area.

Nashville’s postmaster was one of the ones who did this, producing a woodcut 5¢ stamp in various shades of brown, as well as a 10¢ green.

A 5¢ violet brown (Scott 61X5) on a Sept. 27, 1861, cover with a patriotic cachet showing an 11-star Confederate flag was hailed as “extraordinary,” not just for the quality of the stamp but for the desirability of the cachet: the “stars and bars” bore 11 stars only between July and November of that year, so patriotic covers with that configuration are rare and sought after. The cover fetched $31,860.