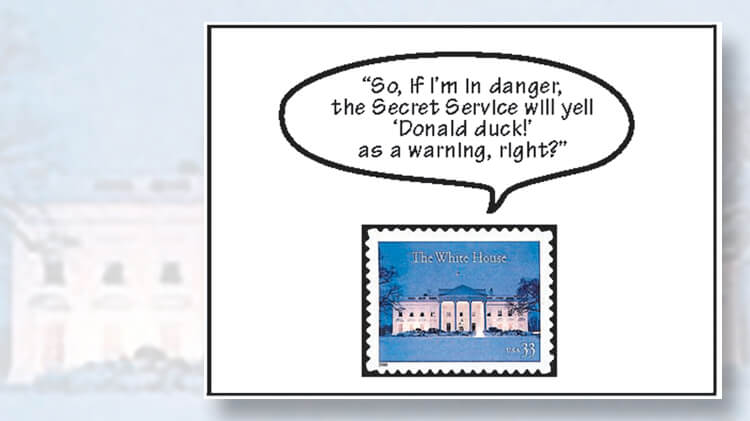 The winner of the nonphilatelic part of the March cartoon caption contest featuring the 33¢ 200th Anniversary of the White House commemorative stamp issued Oct. 18, 2000, is Brian McClay, who invokes a security theme as President Trump settles into his new job. The next cartoon caption contest will be announced in Linn’s May 8 issue.

Some of the entries were partisan on both sides of the fence, but most were evenhanded.

Also, predictably, there were some prevalent themes.

The most common was President Trump’s penchant for hyperbole. This was neatly captured by Alex Gill of West Bend, Wis., who has the president saying, “It’s a wonderful house, a terrific house, a yuuuuge house, the best house! No one loves it better than I do, OK?! Believe me, folks! The best house!”

Turning off some of the White House lights got a lot of attention, but other money-saving ideas also got treatment, such as this example by Stanley Katz of Bellaire, Texas: “If we convert this building to condos, we can cut the deficit Big Time, believe me!”

President Trump’s appearance on a stamp received a lot of speculation, from when he would appear on a stamp, how large the stamp would be, and what its price would be.

It was hard to pick one representative, but this example also represents the many entries that used “the Donald’s” signature line from The Apprentice: “No plans for a Trump Forever stamp? You’re fired!” This was sent by Steve Kotler of San Francisco, Calif.

The pastoral scene on the stamp inspired many entries. My favorite from this pool is from Bill Sharpe of Santa Monica, Calif., and applies equally across the political spectrum: “Perfect! A picture of a snow job at the White House!”

The nonphilatelic line winner deals with security arrangements. It was submitted by Brian McClay of Magalia, Calif.

On the philatelic side, Leon Lutje of Kaukauna, Wis., wins with: “You let my subscription to Linn’s expire? You’re fired!”

“No contact with Russia! I can’t see Russia from the front portico; I can’t even see the Russian Embassy!” from Elaine Frankowski of Minneapolis, Minn.

“Now that I’m the Apprentice, I hope to have your stamp of approval!” by Daniel Young of Madison, Wis.

“Is it just me, or does ‘The White Highrise’ have a nice ring to it?” by Steven Kois of Omaha, Neb.

“Bad news, Mr. President. We haven’t found a drain at the bottom of the swamp,” by Ronald Burns of Shelbyville, Ind.

The next cartoon caption contest will be announced in the May 8 Linn’s.