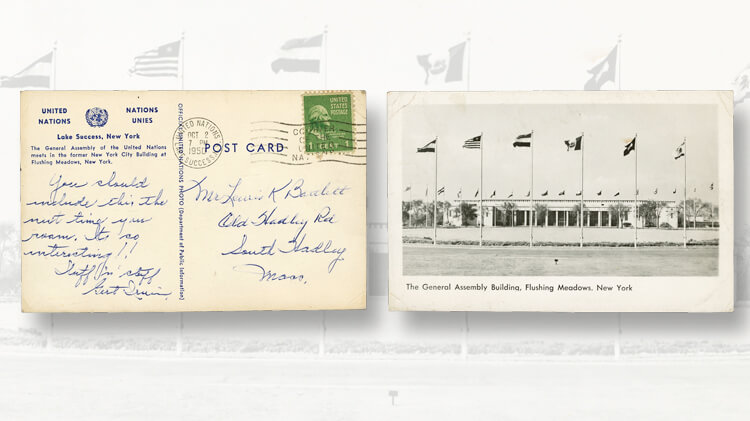 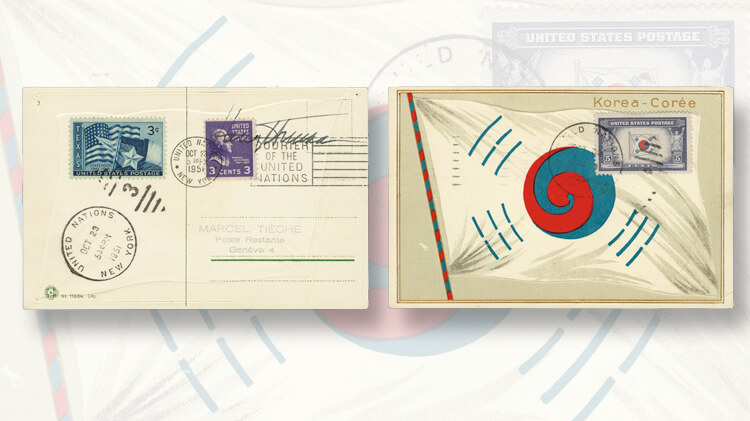 This postcard marks the final day, Oct. 23, 1951, of United States stamps being valid for mailings from the United Nations. The next day, the United Nations issued its first stamps. The front of the postcard shows South Korea’s flag and the matching flag 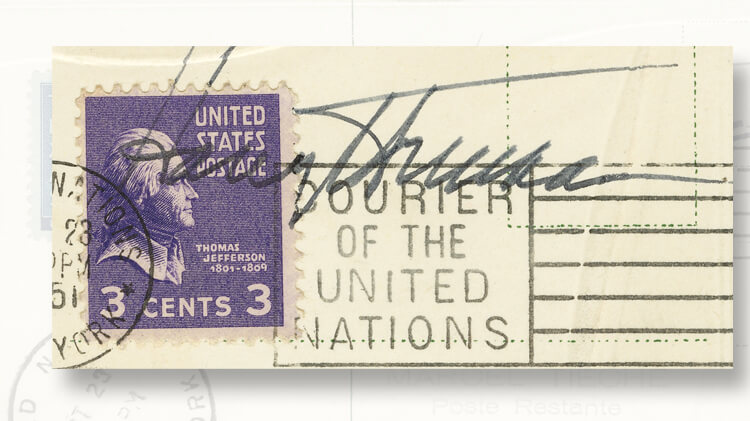 The Oct. 23, 1951, postcard has one feature that is easy to miss: the signature of President Truman that begins on the 3¢ Jefferson stamp.
Previous
Next

The United Nations Postal Administration issues its own stamps for use from the post office at U.N. headquarters in New York City, but there was a time when United States stamps were used on U.N. mail.

That stage of the United Nations’ history came to an end with the opening of the U.N. building in New York Jan. 9, 1951, and the moving of the last elements from Lake Success.

However, there still were no U.N. stamps, so U.S. stamps continued to be used on mail sent from the new headquarters. The cancel read “United Nations New York.”

The United Nations issued its first set of definitive stamps Oct. 24, 1951, and U.S. stamps were no longer valid on U.N. mail.

The front of the card features the flag of what was by then South Korea because the peninsula had been split into two countries after WWII.

South Korea did not become a member of the United Nations until Sept. 17, 1991. But 50 years earlier, when this postcard was sent, the United Nations was playing an important part in Korean history because it had intervened to prevent the June 6, 1951, invasion from the North from overrunning the Republic of South Korea.

The address side of the card is even more interesting. It bears two 3¢ U.S. stamps overpaying by a penny the 5¢ international surface rate to Geneva, Switzerland.

Unless you look closely, you might miss the “Harry Truman” autograph that begins on the 3¢ Jefferson stamp. Truman was the U.S. president at the time, and his autograph is not a common item.

Most U.N. collectors begin where their albums begin, with the issuance of the October 1951 set, but there is a rich trove of U.N. postal history that starts with the founding of the organization in San Francisco in 1945 and spans the years until the United Nations had its own stamps.

These two postcards are just the tip of the iceberg.

When a cancel becomes a crime against stamp collecting