Check out these living writers on stamps 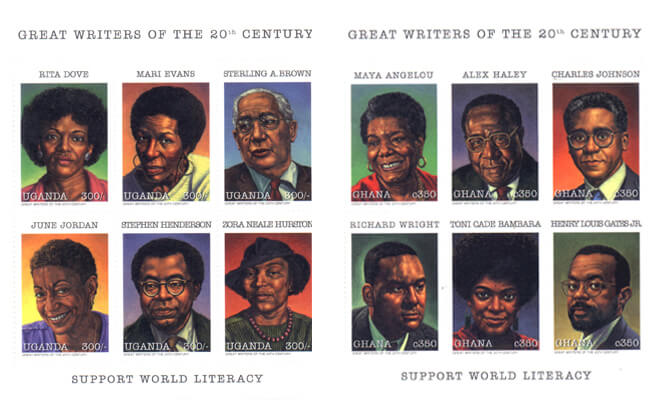 In 1997, Ghana and Uganda celebrated great African American writers of the 20th century on separate panes of six stamps. These and other living writers pictured on stamps caught the eye of Emily Temple, who showcases them in an article on the Literary Hub

When the worlds of literature and stamps intersect, the result can be quite satisfying.

Such was the case when I spotted an article on Literary Hub headlined “17 living writers currently immortalized on stamps.”

Emily Temple, an associate editor at Literary Hub, received inspiration from Literary Hub’s editor, Jonny Diamond, who “wondered aloud if there were very many living writers who’d been immortalized on stamps.”

Temple refers to the United States Postal Service’s criteria for depicting people on stamps as “draconian,” while extolling various countries around the world for picturing “great living authors.”

Among the authors singled out in Temple’s piece are Alice Munro, Canada’s first woman author to receive the Nobel prize in literature; Toni Morrison, the 1993 Nobel laureate in literature; and Nigerian Wole Soyinka, who won the 1986 Nobel Prize.

All told, some 40 different stamps are featured in Temple’s entertaining article. Be sure to check it out.

And if you want to go deeper, be sure to explore some of the article links. One, for example, sends you to illustrations of more than 50 stamps depicting Bob Dylan, who received the 2016 Nobel Prize in literature.