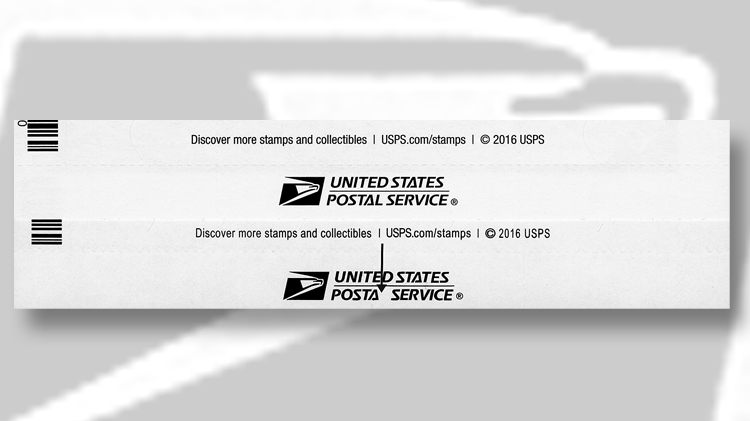 The counterfeiters apparently did not pay attention when reproducing the text on the back of panes of fake Love Skywriting stamps. The arrow points to the missing “L” in the “UNITED STATES POSTAL SERVICE” inscription at the bottom of a counterfeit pane, s 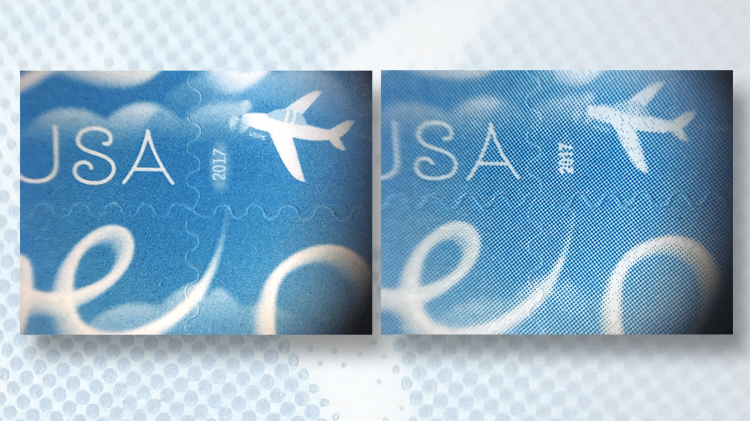 When seen under high (60x) magnification, the difference in the lithographic print quality of genuine Love Skywriting stamps (left) compared to counterfeit stamps (right) is very apparent. Both enlarged images show the die-cut junction of four stamps. Not 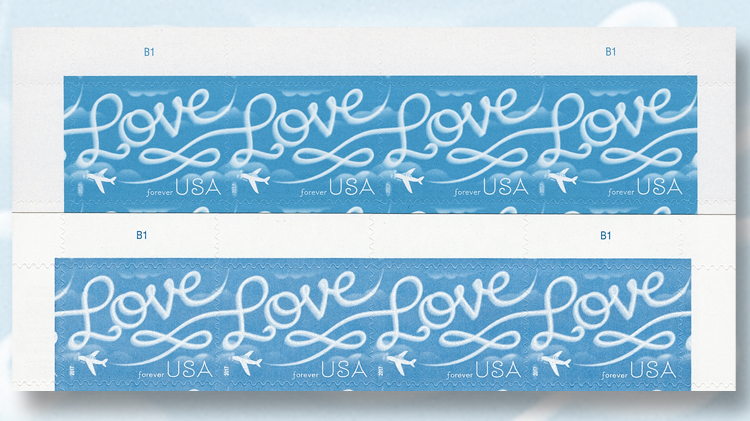 When viewed casually, counterfeit United States 2017 Love Skywriting stamps are a very close mimic of the genuine stamp (Scott 5155). Shown is a cropped image of a counterfeit pane of 20 superimposed on a genuine pane. Bogus stamps are slightly lighter in
Previous
Next

When it comes to counterfeit stamps, the United States Postal Service is not feeling the love.

In mid-August, Linn’s learned of yet another counterfeit of a recent U.S. issue — the Love Skywriting stamp issued Jan. 7 (Scott 5155).

A stamp dealer, who wishes to remain anonymous, tipped Linn’s about the bogus stamp via email Aug. 14, saying “they are being sold on eBay by some of the same sellers as the other counterfeits” Linn’s has reported during the past six months.

Like its genuine counterpart, the bogus Love Skywriting stamp was printed using offset lithography, an indirect printing method easily susceptible to counterfeiting because the technology is readily available and affordable.

That yet another counterfeit of a U.S. stamp has surfaced should not come as a surprise. An active supply chain, operating out of China or Taiwan (or both, perhaps), has been funneling bogus U.S. stamps into the country for at least the past decade or so.

More troubling are the frequency and speed with which these bogus stamps are now being produced.

The counterfeit 2017 Love Skywriting stamp came to light too late for inclusion in the 2018 U.S. Specialized catalog, which will be published in October.

Thompson cautioned that bogus 2017 Love stamps “are very close” to genuine stamps. Indeed, when a genuine pane and a counterfeit pane are placed side by side, they look nearly identical.

For example, the perforation gauge of the bogus stamps matches the genuine: 11 by 10¾. The color of bogus stamps is only slightly lighter than the light blue color of genuine stamps.

Nonetheless, Linn’s detailed examination reveals important characteristics that allow the observant collector to separate the fake from the real.

2. Die-cut peaks of bogus stamps are more pointed than those of genuine stamps. On counterfeit panes, there is a slight misalignment of the horizontal and vertical serpentine die cuts where four stamps come together.

Specifically, the straight-line breaks in the vertical and horizontal wavy-line die-cutting patterns do not intersect perfectly where stamp corners meet. This is readily seen under high (60x) magnification.

3. Under high magnification, the lithographed dot pattern of counterfeit Love Skywriting stamps is much coarser in comparison to the much finer dot structure of genuine stamps.

In addition, the legible microprinted “USPS” just below the airplane at lower left on each genuine stamp appears as an indistinct white spot on counterfeit stamps.

The “2017” year date in the lower-left corner is legible on both genuine and bogus stamps. However, the “1” is missing the bottom serif

Bogus panes lack this rouletting, and the serpentine slits are slightly misaligned in relation to the backs of the stamps.

5. In the text printed on the bottom of the back of counterfeit panes, the “L” in “UNITED STATES POSTAL SERVICE” is missing. Of course, this difference may only be seen on intact panes.

In 2004, Linn’s was first to report the discovery of counterfeit 2002 37¢ Flag stamps, which are now listed as Scott 3635(CF1). At that time, the U.S. Postal Inspection Service was engaged in an ongoing investigation to determine the source of the counterfeit stamps.

Postal counterfeits of U.S. stamps were listed for the first time in the 2013 edition of the U.S. Specialized catalog, published in October 2012.

Today’s web of stamp counterfeiting has spread far and wide, making it even more difficult for postal inspectors to pinpoint the producers and sellers and shut them down.

Linn’s ongoing investigation into the murky origins of the Love Skywriting and other recent counterfeits, which began in early February, suggests that the problem is larger than initially thought.