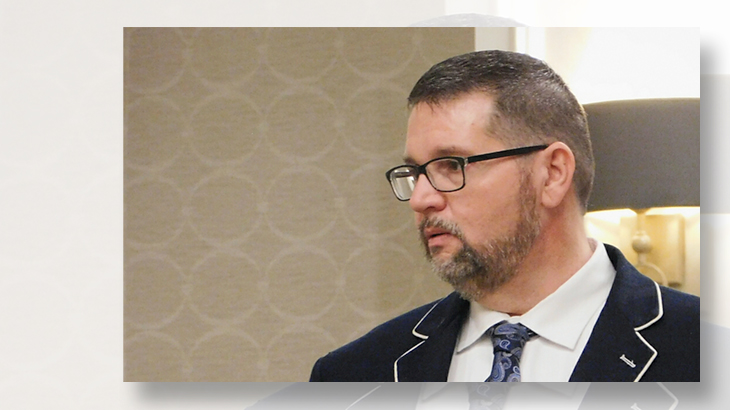 American Philatelic Society executive director Scott English addresses the APS board of directors during the Aug. 2 board meeting in Richmond, Va.

The executive director of the American Philatelic Society, Scott English, has signed on for another two years.

The decision to continue English’s contract with the society was made official when the APS board of directors met in executive session on Aug. 2, in Richmond, Va.

English told Linn’s Stamp News that he made a presentation before the board on Wednesday morning. The board then deliberated, with English absent from the room, and voted to continue his contract for another two years.

English announced the news himself during the open session of the board meeting, later that same morning, prior to his regular report before the board.

“I’d like to thank the board for renewing my contract and showing faith in the work that we’ve been doing,” English said.

He remarked on the agreement again that evening while speaking to attendees at the society’s Campaign for Philately reception.

English was hired following a lengthy search process in 2014-15, replacing Ken Martin, who was named the society’s chief operating officer. English was introduced to APS members Aug. 20-23, 2015, during the organization’s annual summer stamp show and convention, in Grand Rapids, Mich.

Prior to accepting the position with the APS, English was chief of staff for U.S. Representative Mark Sanford of South Carolina, and had also worked as chief operating officer for South Carolina’s Department of Education.

When he was hired by the APS, then-president Stephen Reinhard described the new executive director’s responsibilities as “addressing a continuously decreasing membership, increasing our gift and grant income, improving and adding to our member services, addressing outreach opportunities by partnering with other organizations both within and outside of the hobby, and identifying and addressing the needs of thousands of collectors who call the Internet their home.”