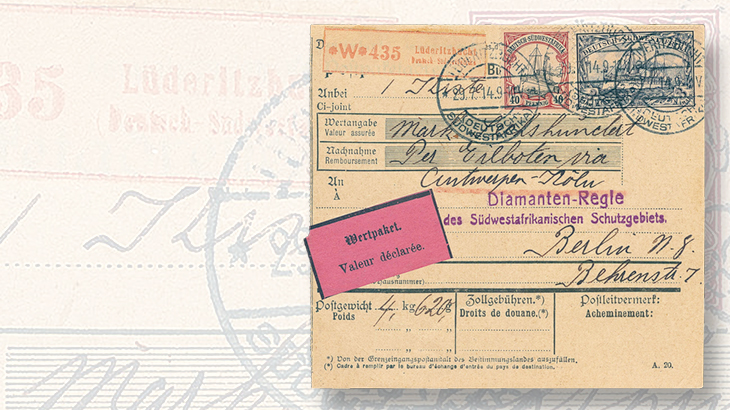 Another splendid item from the Gert Muller sale was this card accompanying a declared-value parcel addressed to the German South West Africa directorate for the diamond trade in Berlin and insured for 600 marks. One of just two such cards known from the f 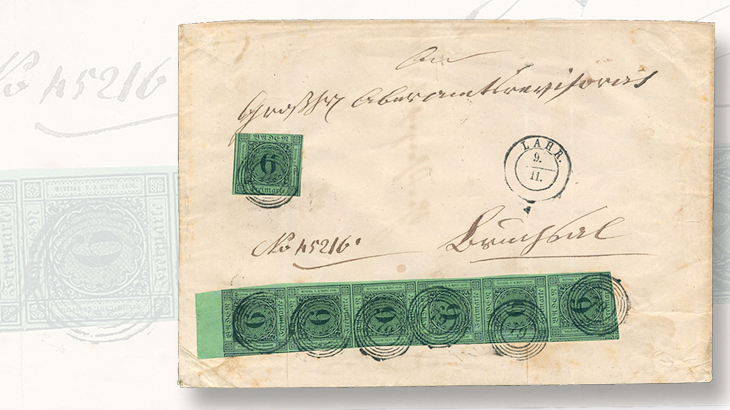 Appearing on the market for the first time since its serendipitous discovery several decades ago, this 1852 cover sent locally in Baden is franked with the largest-known multiple of the 6-kreuzer black on yellow-green. The firm of Gert Muller offered the
Previous
Next

In Ettlingen, Germany, a short distance from Stuttgart, the firm of Gert Muller held a sale of German-area stamps and postal history Aug. 18-19.

Two items in particular stood out: a high-franked cover from the pre-unification state of Baden, and a parcel card from the soon-to-be-lost colony of German South West Africa.

The Baden cover, making its market debut, dates to 1852, when Germany was a patchwork of independent kingdoms and principalities, each with their own postal services.

Sent locally, the cover was franked with a strip of six and a single of Baden’s 6-kreuzer black on yellow-green (Scott 3), paying seven times the single letter rate, tied by cancels with “79” in a five-ring circle. A dated postmark of the town of Lahr appears alongside.

The cover not only bears the largest known franking for this stamp on a piece of Baden postal history, but the strip of six, described as “dreamy,” is also the largest known multiple of the 6kr denomination (the runner-up is an off-cover strip of five).

Making it even more attractive, ample margins surround almost the entire strip, with parts of the adjacent stamps and a bit of sheet selvage showing. Given the tight spacing between stamps on this issue, any example with four margins is worth a significant premium.

The cover was discovered several decades ago by a collector who reportedly rescued it from a paper mill where it was about to be pulped. The Muller sale marks its first time on the market since that lucky day.

The German colony of South West Africa (modern-day Namibia) was established in 1884 and issued its first stamps in 1897, consisting of the country name overprinted on regular German stamps.

In 1901, a definitive (regular-issue) set with the omnibus design of the Kaiser’s yacht, SMY Hohenzollern, was issued, inscribed “Deutsch Sudwestafrika.”

Settlers exploited the colony for farming and for mining diamonds, gold, and other minerals. At the colony’s peak, however, there were only a few thousand Germans in a territory one-and-a-half times the size of Germany itself.

As a result, upon the outbreak of World War I in 1914, allied forces from neighboring South Africa quickly overran the colony.

A card accompanying a declared-value parcel, addressed to the colony’s directorate for the diamond trade in Berlin and insured for 600 marks, was postmarked in Luderitzbucht July 29, 1914, and apparently sailed with the last post to leave German South West Africa, on the steamship Gertrud Woermann. After transferring to an Italian ship in Brazil, the parcel arrived in Genoa in October of that year and reached the homeland shortly after.

Postal history from German South West Africa is generally scarce, and this card, franked with 3-mark and 40-pfennig Hohenzollern stamps (Scott 13, 18), is one of just two parcel cards known from there.

Described as one of the colony’s most important documents, it fetched $21,250.

After the war, South West Africa was mandated to South Africa, which governed it until 1990, when it finally gained independence as Namibia. Several thousand descendants of German settlers still live there.