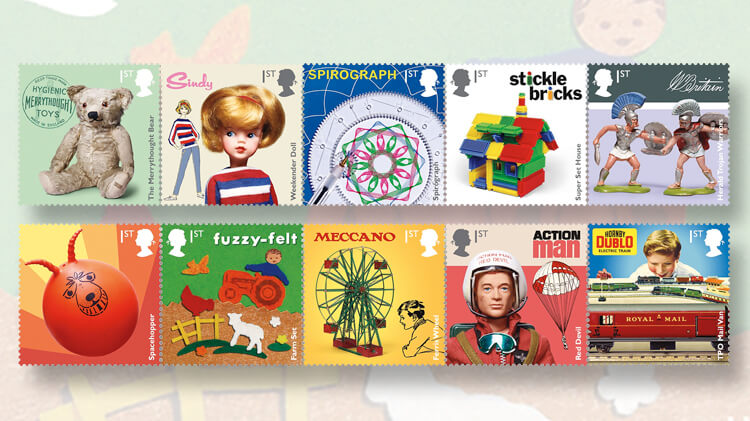 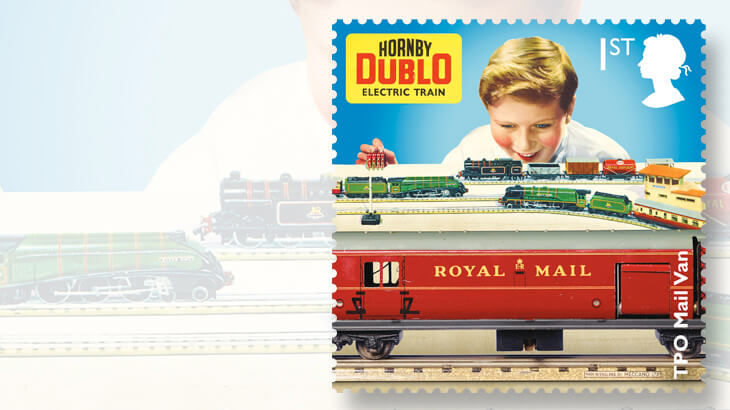 The stamps were issued Aug. 22 in two strips of five with the designs se-tenant (side-by-side).

All of the stamps are nondenominated. The “1st” beside the silhouette of Queen Elizabeth II indicates that the stamps pay the basic domestic rate (currently 65 pence).

The first strip of five features a Merrythought bear, the Sindy doll, Spirograph, Stickle Bricks, and toy figures made by the William Britain Company.

Shown on the second strip are a Spacehopper, Fuzzy-Felt, Meccano, an Action Man figure, and Hornby Dublo model trains.

In announcing the stamps, Royal Mail said, “The heyday of the British toy industry remains a magical era, one that shaped childhoods across the generations.”

After more than eight decades, the Merrythought Company is still in existence, making bears and other stuffed animals.

Merrythought said: “Merrythought has been hand-making the quintessential English teddy bear in the World Heritage Site of Ironbridge, Shropshire, since 1930 and is now the last remaining British teddy bear manufacturer. The company is a fourth generation family business founded by Mr. W.G. Holmes in 1930 as a diversification from his mohair mill in Yorkshire.”

Considered the British answer to Barbie, the Sindy doll was created by Pedigree Toys and launched Sept. 6, 1963, with a television commercial.

On the stamp, Sindy is wearing her “Weekender” outfit of jeans and a sweater with red, white, and blue stripes.

Susan Brewer, in British Dolls of the 1960, wrote: “Sindy’s innocent, natural looks meant that she gave full rein to a child’s imagination and could be whatever age a child wanted — friend, sister, mother or the girl next door. Her casual clothes were the kind of clothes they would wear, too.”

British mechanical engineer and inventor Denys Fisher developed the geometric drawing tool called Spirograph and exhibited it for the first time at the Nuremberg International Toy Fair in 1965.

In January 1966, Kenner Toys purchased the right to sell it to customers in the United States. According to the red box it was packaged in, the Spirograph “was a simple and fascinating way to DRAW a million marvelous patterns.”

A few years later, in 1969, Fisher invented Stickle Bricks, a construction toy for toddlers. The stamp depicts a house made from these plastic bricks. They have small “fingers” on one or more sides that make it easier to put them together and pull them apart.

William Britain, also known as W. Britain or Britain, began producing metal toy soldiers in 1893. For the most part, the process stayed the same until the 1950s when other firms started making plastic figures. One of these firms, Herald, was purchased by W. Britain in 1959.

According to the new-issue announcement from Royal Mail, the United States cavalry, cowboys and Indians, and Greek warriors were among the most popular characters of W. Britain’s new plastic figures.

Two Trojan warrior figures are depicted on the stamp.

The Spacehopper was developed by Aquilino Cosani in Italy. In a 2014 interview with Dave Simpson of the Guardian newspaper, Cosani said he was inspired by watching a documentary about kangaroos.

“I realised that children never look as happy as when they’re jumping,” Cosani said, “So I decided to make a toy that let them bounce around like kangaroos.”

Mettoy manufactured the British version of this ball, which became a huge hit in the 1970s. In the United States, a similar ball was sold under the name Hoppity Hop.

In an article celebrating this fabric toy’s 50th anniversary in 2010, Leo Benedictus of the Daily Mail explained how it got started: “Like so many great inventions, Fuzzy-Felt was a by-product of the military-industrial complex. It was discovered during the second world war when Lois Allan, whose outbuildings were being used to manufacture felt gaskets for sealing tank components, noticed how the workers’ children enjoyed sticking cast-off shapes on to the fuzzy backs of her table mats.”

The stamp shows a Fuzzy Felt farm scene of a farmer on a tractor, animals, and a fence.

On Jan. 9, 1901, Frank Hornby of Liverpool patented “Mechanics Made Easy,” a toy he had created for his sons. In 1907, it was renamed Meccano, and is still sold under that name today.

Illustrated on the stamp is a boy and a Meccano Ferris wheel assembled by Ralph Laughton.

American toymaker Hasbro introduced G.I. Joe, an action figure for boys, in 1964. A couple of years later, the British company Palitoy started its own line — Action Man, which includes the Red Devil parachutist shown on the stamp.

After the success of Meccano, Hornby began manufacturing toy trains in 1920 that were “0” gauge in size. Another system about half of this size (“00” gauge), introduced in 1938, was called Hornby Dublo.

A boy is shown playing with a Hornby Dublo train set in the background of the stamp. Pictured in the foreground is a Hornby Dublo version of a Royal Mail Traveling Post Office mail car.

The design agency Interabang designed the stamps, using photographs of the toys taken by John Ross.

International Security Printers printed the stamps by offset in sheets of 50 that are sold in panes of 25 at most postal outlets.

Royal Mail’s other products for this Classic Toys set include first-day covers, 10 postcards reproducing the designs of the stamps, and a presentation pack with mint examples of the stamps and stories about the toys.