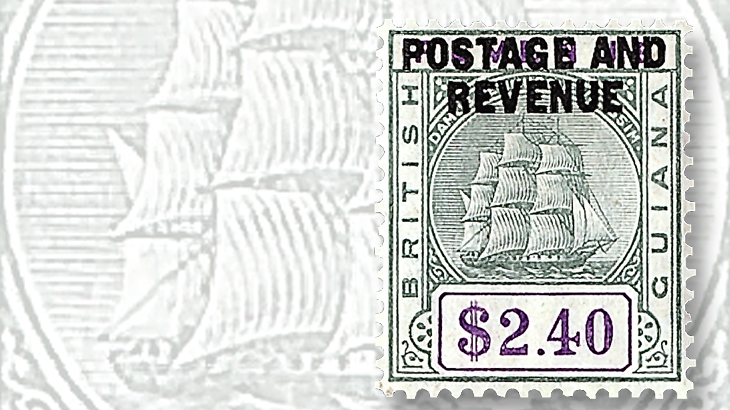 In the early 1900s, some British Guiana stamps were overprinted “POSTAGE AND REVENUE” in black, and a white tablet with “$2.40” denomination was added to the foot of the ship design. 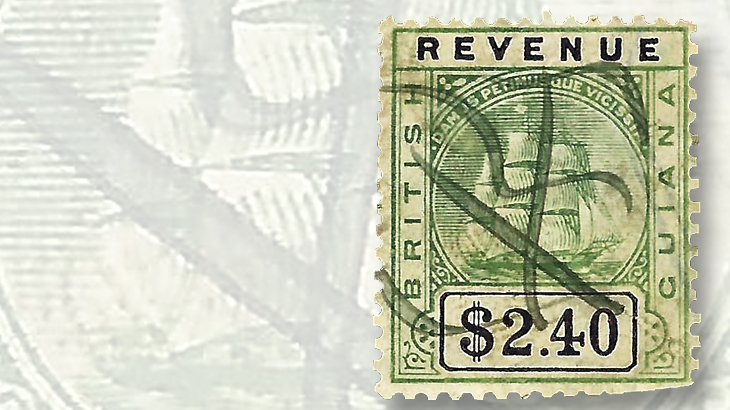 Similar to the “POSTAGE AND REVENUE” $2.40 issues, a British Guiana stamp with only “REVENUE” was issued sometime in the early 1900s. It does not have a Scott catalog number. 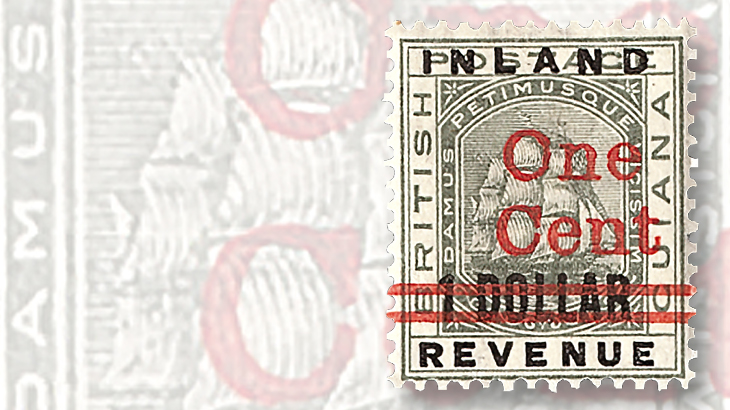 British Guiana Scott 148, of 1890, has a complex story. This regular postage stamp of the Seal of the Colony design became a $1 surcharged inland revenue stamp. The $1 surcharge was invalidated with lines and a new denomination of only 1¢ was added. 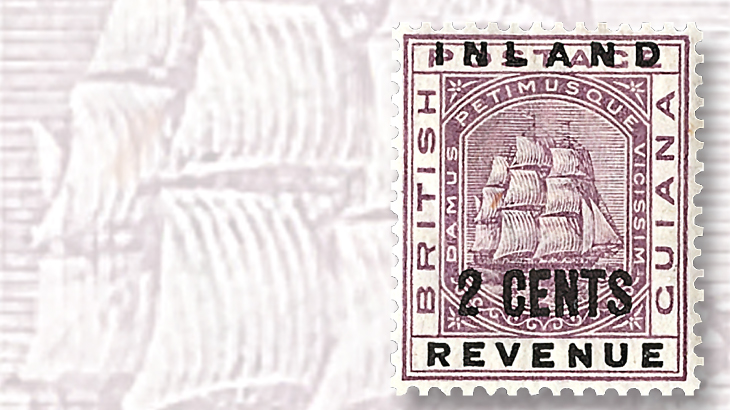 Other surcharging was done in 1889, when British Guiana postage stamps overprinted “INLAND REVENUE” were surcharged with new denominations. 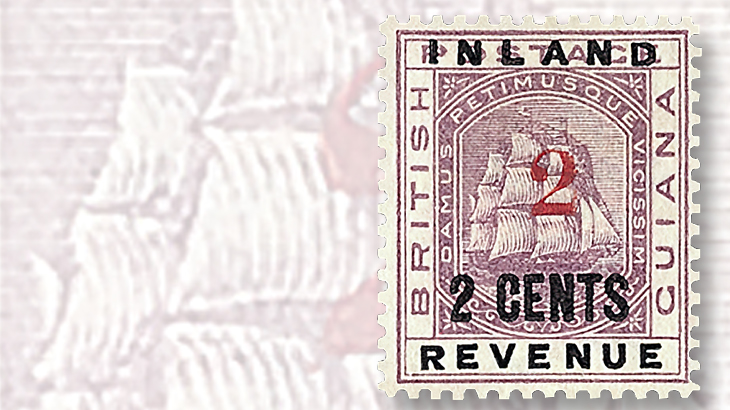 This 1889 British Guiana stamp, Scott 129, displays the “INLAND REVENUE” overprint plus two surcharges, of “2” in red and “2 CENTS” in black. 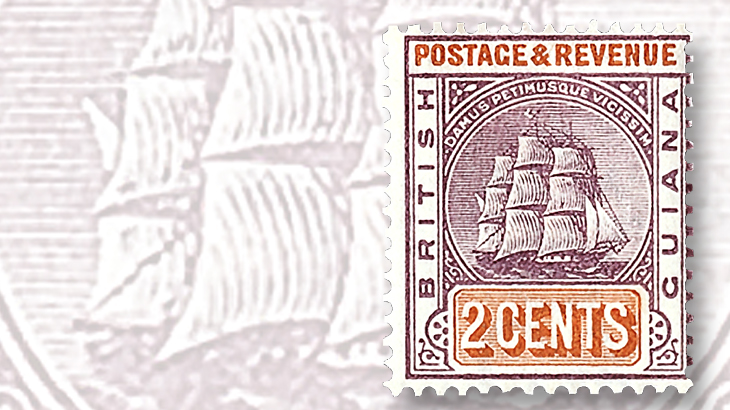 In 1889, the “POSTAGE” wording at the top of British Guiana stamps became “POSTAGE & REVENUE,” making them into multipurpose issues. 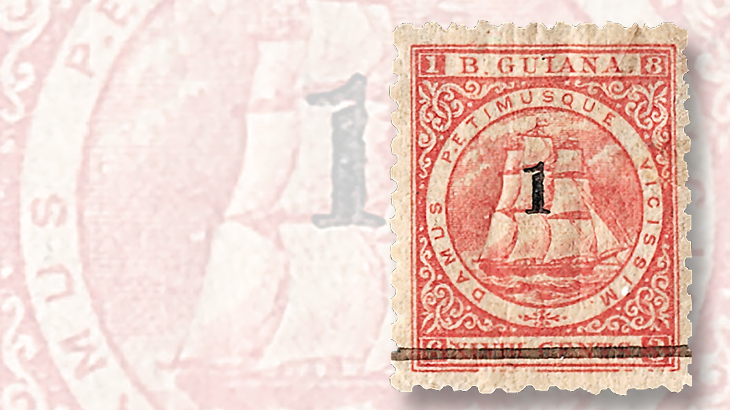 In 1881, various British Guiana stamps with the Seal of the Colony (Ship) design were surcharged with new denominations, such as this 48¢ stamp given a 1¢ overprint. 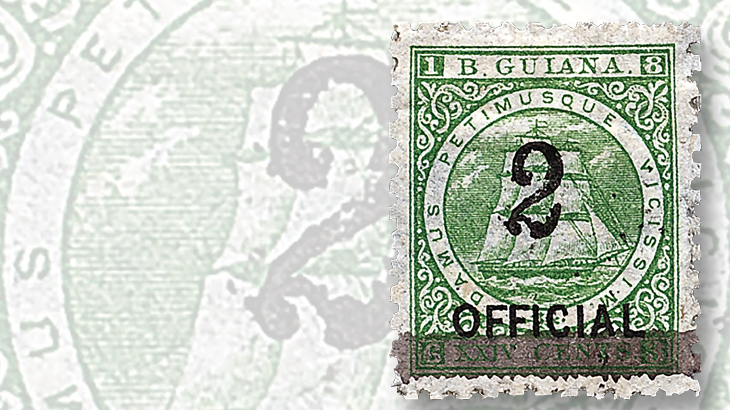 Also in 1881, some existing British Guiana Official stamps and some unissued Officials were surcharged with new denominations. 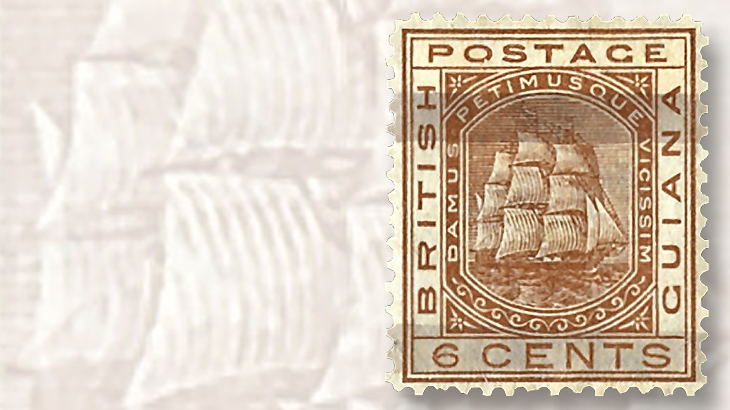 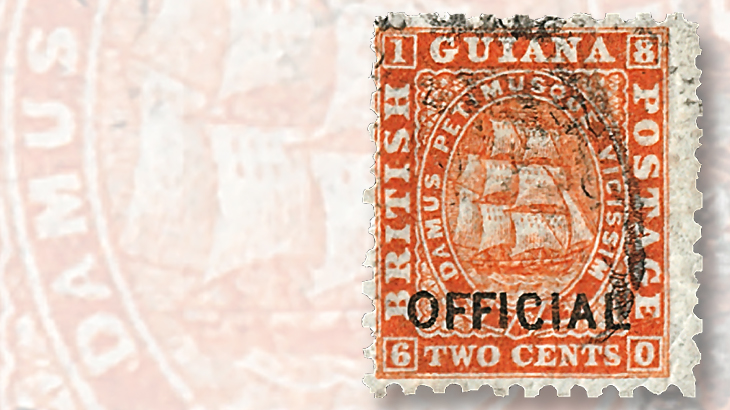 All of British Guiana’s Official stamps were made by overprinting regular issues, such as this 2¢ ship-type design stamp overprinted in black in 1875. 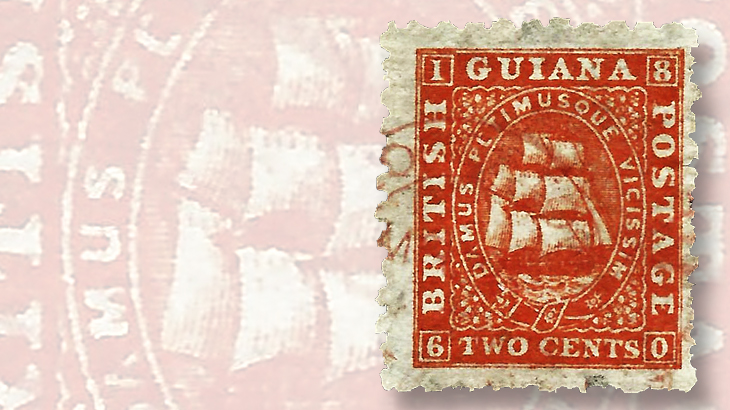 This 2¢ British Guiana stamp of 1866 depicts a Blackwall frigate and displays a handstamped “A03” postmark, a marking made for use in the colony’s British post offices. 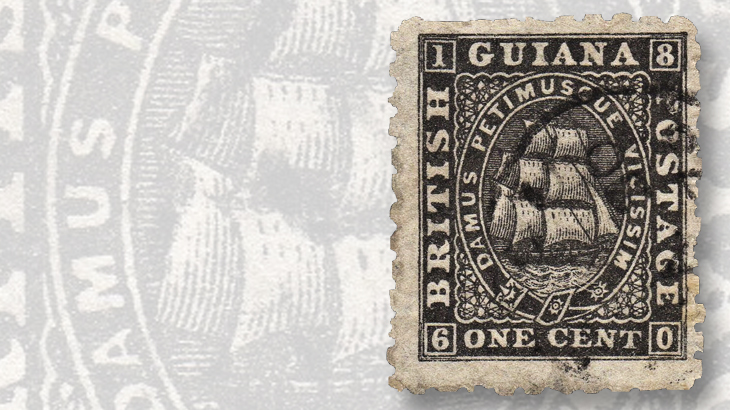 British Guiana’s seal of the colony included a masted ship known as a Blackwall frigate, as depicted on this 1866 1¢ stamp. The stamp design is known as the “ship type.” 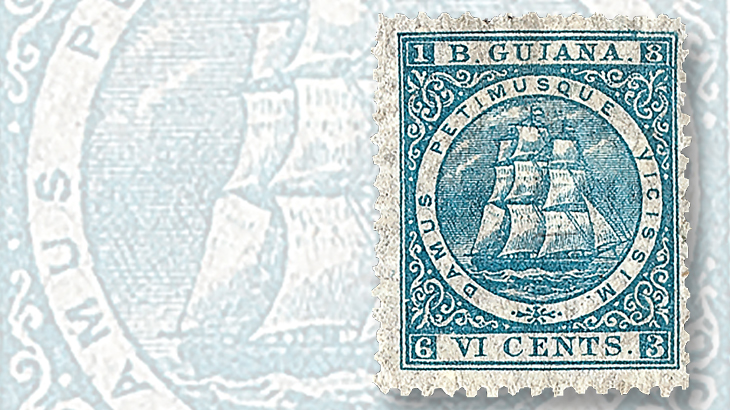 Roman numerals rather than Arabic figures were used to indicate the denominations on some British Guiana stamps. This 6¢ stamp of 1863 is another with the masted ship design.
Previous
Next

Many collectors back away from collecting stamps from countries that have super-expensive stamps. This is a shame, because in addition to the often-unattainable stamps, there usually are other more affordable stamps within the country that are fascinating, beautiful, and full of history.

However, that issue and other very rare British Guiana stamps shouldn’t stop anyone from collecting the other wonderful stamps of that British colony.

A little larger than the state of Kansas (and larger still than the entire country of England), British Guiana was on the northern coast of South America.

The earliest issues of British Guiana depict a masted sailing ship with the colony’s motto around it: the Latin words, “Damus Petimusque Vicissim” (“We give and we ask in return”).

Beginning with issues of 1866, British Guiana stamps begin to fit into the more affordable range, yet they have designs similar to the earlier expensive issues.

For example, a beautiful 1¢ black stamp showing the colony’s seal was issued in 1866 (Scott 50). The center of the seal pictures a sailing ship known as a Blackwall frigate, a type of three-masted, full-rigged ship so named because of its origin at Blackwall shipyard in London, on the Thames River.

There are many more Seal of the Colony stamps with the ship, printed on thin or thick paper with various perforations and watermarks.

The more you delve into British Guiana stamps and the variations of this Ship-type design, the more likely it is that you will find interesting varieties, surcharges, and overprints. It can become addictive.

Some of the Seal of the Colony (Ship) stamps use Roman numerals for the denomination; for example, “VI CENTS” on the 6¢ stamp of 1863 (Scott 64).

In 1878, by official decrees, some of the Seal of the Colony stamps were overprinted, with examples shown in the Scott Standard Postage Stamp Catalogue and the Scott Classic Specialized Catalogue of Stamps and Covers 1840-1940 under the heading, “Stamps Surcharged by Brush-like Pen Lines.” They are interesting stamps but not particularly beautiful.

Is it worth it? That is up to you.

In 1881, Seal of the Colony stamps, including some unissued Official (government use) stamps with the design, were surcharged with a 1¢ or 2¢ overprint (Scott 92-95). These are small stamps with small surcharges and, in some instances, big catalog values for unused as well as used stamps.

The Seal of the Colony designs were modeled to perform a lot of different jobs. Some were overprinted with the words “INLAND REVENUE” and surcharged in 1889. There are denominations that go from 1¢ to $5 (Scott 112-128), with catalog values rising as the denominations go higher. The lower denominations are quite wallet-friendly.

Some of the Inland Revenue overprinted and surcharged stamps were surcharged a second time, in 1889, resulting in the 2¢-on-2¢ denomination on Scott 129.

Further in 1889, some issues showing the seal of the colony were redesigned, with the box at the top of the stamps that reads “POSTAGE” becoming “POSTAGE & REVENUE” (Scott 130-147).

Sometime during 1905-10, an earlier Seal of the Colony stamp was overprinted “POSTAGE AND REVENUE” and a box added at the foot of the stamp with the denomination $2.40 (Scott 171).

A similar stamp overprinted “REVENUE” and given the denomination of $2.40, as a revenue stamp, is not listed in the Scott Standard catalog.

Stamps overprinted “OFFICIAL” in red or black round out the Seal of the Colony ship-type stamps, as well as the British Guiana listings in the Scott Standard catalog.

Scott O2, the 2¢ orange stamp and the first-listed black “OFFICIAL” overprint, issued in 1875, is modestly valued in used condition. Treat yourself to this one.

The British Guiana listings in the Scott Standard catalog end in 1966, when the colony became the independent state of Guyana on May 26 of that year.

The moral of this story is that you can skip past the most expensive of the British Guiana stamps and still achieve collecting satisfaction through stamps using the attractive Blackwall frigate designs based on the seal of the colony.

These are classic British Guiana stamps of the 19th and early 20th century.

And, having fallen in love with the colony’s issues, you can go on from there and introduce yourself to Guyana. This enables you to move your collection through the attractive pictorial stamps of the King George V period, go forward with King George VI and then proceed with Queen Elizabeth II. The stamps are readily available and most of them are easy on the budget.