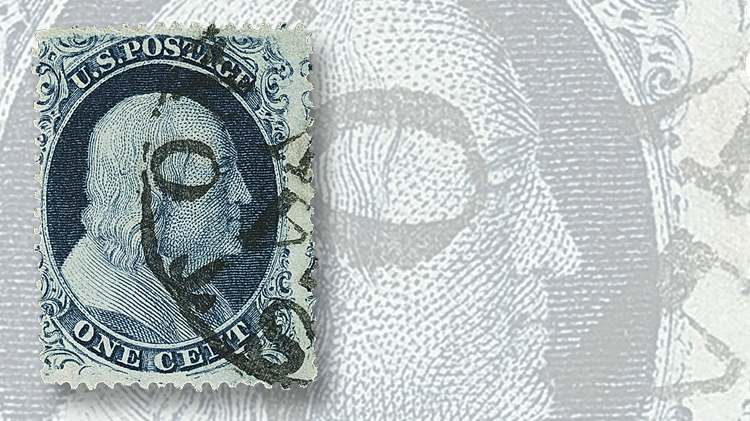 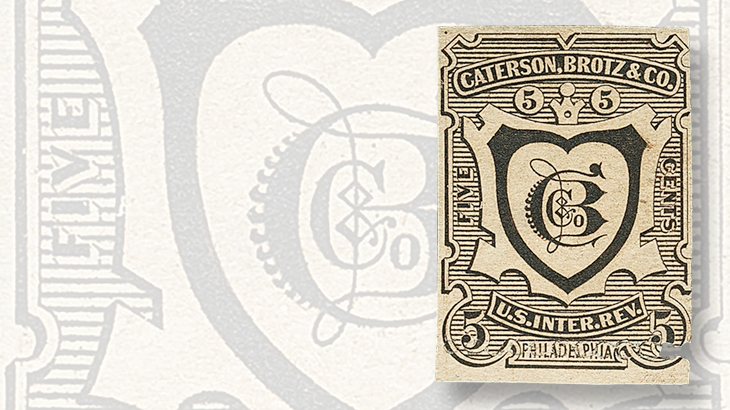 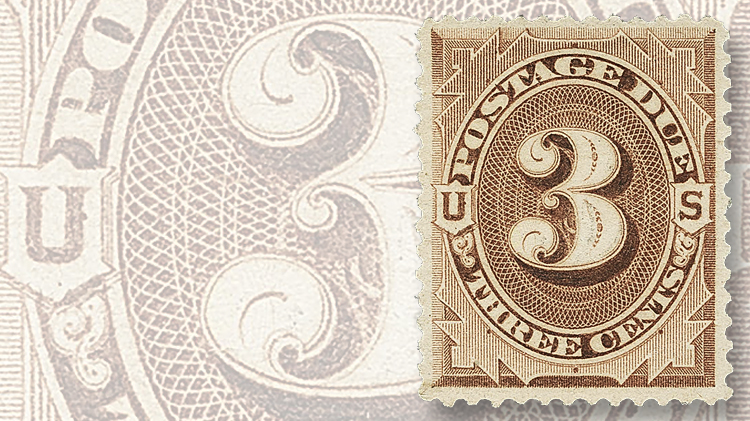 A new owner paid $35,400 for this 3¢ postage due special printing of 1879, described by Siegel in its June Rarities auction catalog as “the finest sound, original-gum example we have ever encountered.” 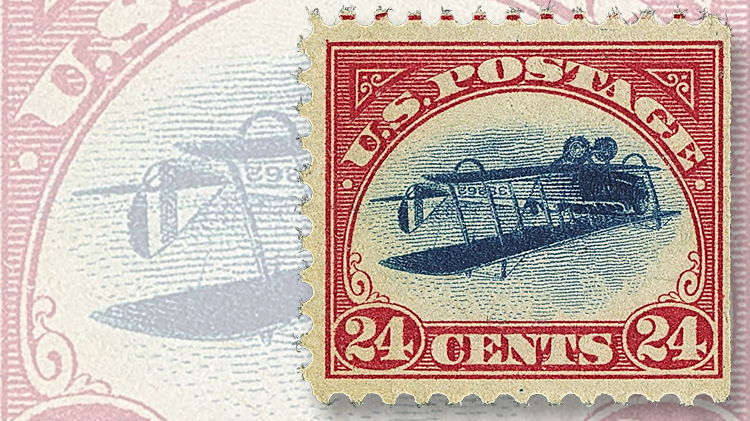 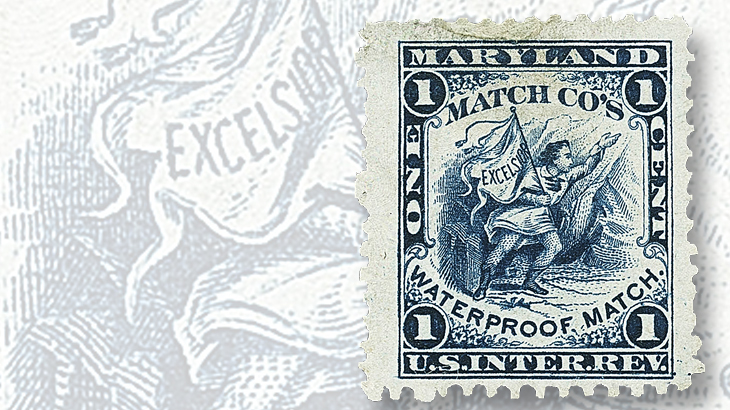 On June 28, Siegel offered the fifth part of the Grant Inman collection, focusing on match and medicine stamps. The star lot was this unique example of the 1¢ Maryland Match Co. stamp on watermarked paper that sold for $44,250. 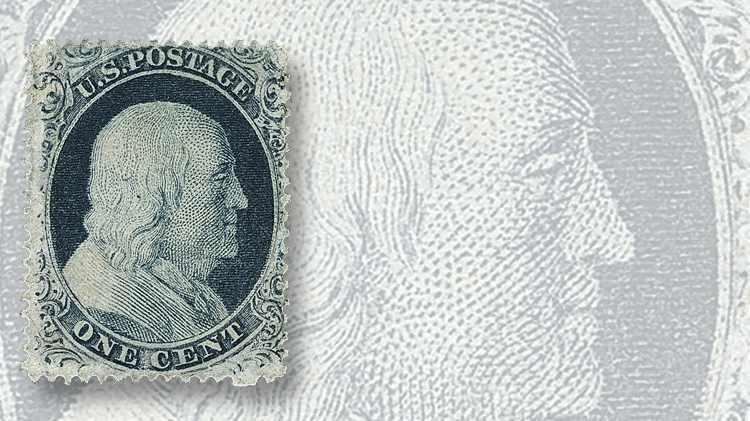 Sometimes a rarity slips by even the most experienced of eyes. Such was the case at Robert A. Siegel Auction Galleries’ June 27 Rarities of the World sale, when this rare unused position 99R2 plate variety of the 1¢ 1857 Benjamin Franklin stamp (type III) 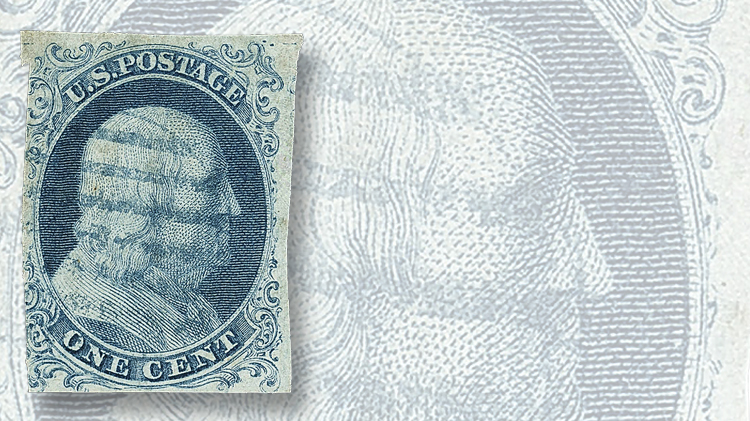 The most famous variety of the imperforate 1¢ 1851 Franklin, the lone plate position (7R1E) with a type I impression showing complete framelines and scrollwork (Scott 5), was represented in the Siegel Rarities sale by this lightly used example that brough 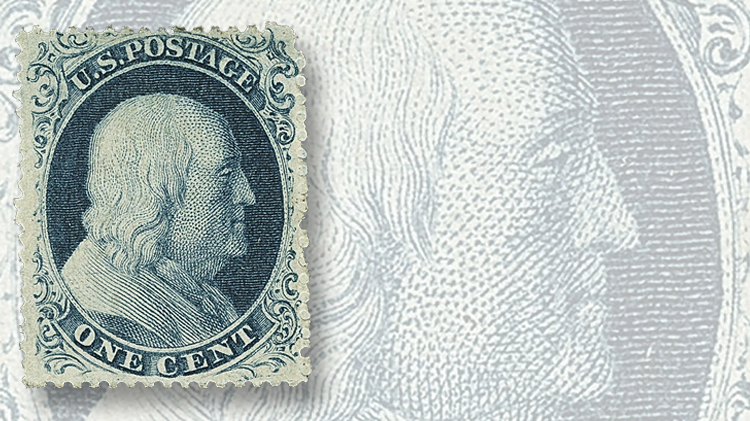 Also in the Siegel Rarities auction was this well-centered, unused example of a garden-variety 1¢ 1857 Frankin (type III, Scott 21) from plate 4, which fetched $4,425. 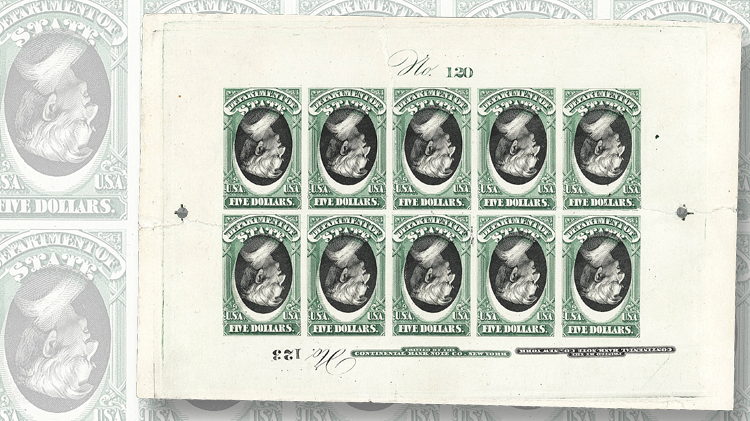 Siegel sold this unique plate proof on card of the $5 State Department Official, with the centers of all 10 green-and-black stamps inverted for a handsome $59,000 during the firm’s June Rarities auction. 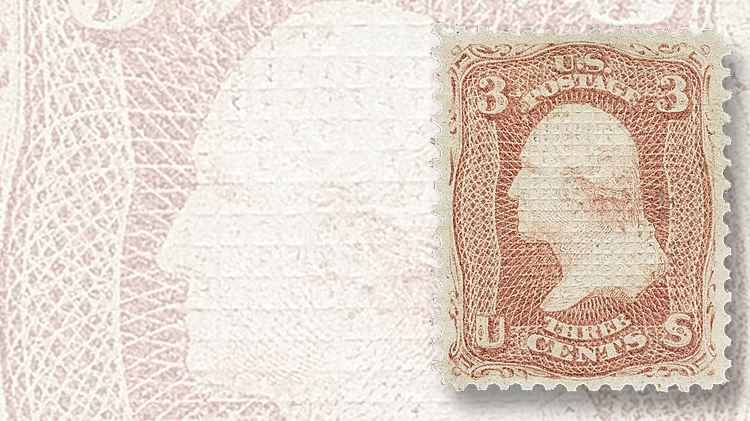 Elusive grilled stamps were featured in the June 27 Siegel Rarities sale in New York City. This 1867-68 3¢ George Washington with a C grill, with a PSE graded extremely fine-superb certificate, sold for $17,700.
Previous
Next

Rarely — but not never.

On June 27 in New York City, a unique and highly desirable variety was spotted lurking in plain sight by a sharp-eyed philatelist browsing Robert A. Siegel Auction Galleries’ annual Rarities of the World sale.

The customer, Bernard Biales, a Boston-based expert in postal history, said afterward he was stunned that nobody else had spotted it.

The stamp in question is a perforated 1¢ Benjamin Franklin of 1857, whose design shows breaks in the outer framelines at top and bottom that categorize it as type III (Scott 21).

The clear signs of a major re-entry, especially down the right side of the stamp, and the noticeably wide breaks in the top and bottom framelines allow it to be readily identified as coming from position 99 in the right-hand pane of 100 from the second printing plate, noted by philatelists as 99R2.

As such, it is a highly sought-after variety, one that merits its own entry in the Scott Specialized Catalogue of United States Stamps and Covers as a sub-listing of Scott 21.

Collectors recognize five major types (I-V) and several sub-types of the 1¢ design, depending on the degree to which the outer framelines and scrollwork of the design have been erased and/or redrawn.

Not every type occurred on every printing plate. Most type III stamps come from either the early state of plate 1, or from plates 4 or 12.

Only a single position — 99R2 — yielded a type III on plate 2. This happened thanks to a mistake by the plate’s engraver that required him to enter the relief a second time, in a position slightly shifted from the first attempt and less complete at top and bottom. Traces of the original entry can clearly be seen at right.

A dozen plates were employed for the printing of the 1¢ design between 1851 and 1860, with stamps from the first four plates being issued mostly prior to the advent of perforations in 1857.

Only a tiny fraction of the stamps from plate 2 — perhaps 5,000 sheets — were perforated, making all perforated plate 2 stamps scarce.

Position 99R2, perforated, is therefore a one-in-200 occurrence from one of the hardest to find plates.

Until now, the variety has only been known in used condition (just 17 examples are known to exist, with three on cover), along with a famous unused block of nine that includes 99R2 together with eight other stamps of type II. That block is valued by Scott at $110,000.

The new discovery, the sole known unused single of its kind, was described in Siegel’s sale as simply a “1¢ Blue, Ty. III,” with the Scott value of $17,500 given as an estimate.

It is of “fine appearance,” has large part original gum, and is accompanied by a 1987 Philatelic Foundation certificate that merely notes the presence of toning, since removed from the front.

Biales, who describes himself as a semi-retired dealer in pre-stamp postal history, said he spotted the stamp in the catalog for the Siegel sale, where it was lot 59, and was intrigued that the description made no mention of the evident variety.

As if to clue in careful observers, lot 61 of the same sale (on the same page) was a used 99R2, fully described as such and accompanied by a detailed explanation of how the variety arose and a link to the census on Siegel’s website with images of every known example of Scott 21, position 99R2.

With fingers crossed, Biales traveled down to New York to examine the stamp and attend the auction.

The lot opened at $1,600. Biales raised his hand, and Siegel’s president Scott Trepel, who was calling the sale, asked, “Are you bidding?”

Biales glanced over his shoulder and, seeing no one, kept his hand up. Moments later, to his amazement, the stamp was hammered down to him for a modest $2,000, or $2,360 with the 18 percent buyer’s premium that Siegel adds to every lot.

Leaving the room, Biales commented to Trepel that it was only the second known unused 99R2. Sensing that he might have just let a big one get away, Trepel pointed out that the certificate makes no mention of the stamp’s position.

Asked to surmise what his discovery might be worth, Biales said he hoped he could get $30,000 for it. “It would be funny to offer it in the next Siegel Rarities sale.”

Confirmation of that guesstimate will, of course, depend on getting the stamp re-certified by the Philatelic Foundation.

While the identification as a 99R2 does not seem to be in doubt, Trepel cautioned after the sale that current expert opinions might interpret the toning as putting the stamp’s unused status in doubt.

“Needless to say, I am angry at myself for passing that lot by while I remotely edited the descriptions,” Trepel wrote in an email. “I was not alone … but if it gets a P.F. [certificate] as unused it is a story worth telling.”

Meanwhile, the most famous variety of the imperforate 1¢ of 1851, the lone plate position (7R1E) with a type I impression showing complete framelines and scrollwork (Scott 5), was represented in the sale by a lightly used example that brought $17,700. Almost 100 examples of this stamp are known.

Moving forward, the Rarities sale included a number of elusive grilled issues, stamps prepared in the 1860s with experimental waffle patterns pressed into the paper to deter cleaning and reuse.

Collectors categorize the various grills by their sizes and number of points. Certain grills on certain stamps can be rare.

Among back-of-the-book issues was a certain famous 24¢ airmail issue of 1918 with the biplane in the center printed upside down in error (Scott C3a).

Position 60 from the original sheet of 100, this example of the invert with a natural straight edge at right was last offered to the public in 1974, when it sold for $25,000, according to the exhaustive website maintained by Siegel.

This time, the Position 60 Jenny Invert, described as having lightly hinged gum and bright, fresh colors, went to a new home for $295,000.

Among 19th-century postage stamps, some of the greatest rarities are the special printings that were made available to the public for a limited time in the late 1870s, but not sold at post offices.

Many collectors think of the regular Bank Note issues when they think of special printings, but back-of-the-book stamps received the same treatment.

A 3¢ postage due special printing of 1879 (Scott J10), distinguishable from the normal 1879 issue by its soft, porous paper, was described by Siegel as extremely fine and “the finest sound, original-gum example we have ever encountered.”

While 436 examples were reportedly sold at the time, many have probably been lost. Siegel wrote that they are unable to trace more than 10 other examples in their own sales records, of which just two appear to have been sound with original gum.

The example offered in the June 27 Rarities sale, with the best centering of them all, went for $35,400.

A unique plate proof on card of the $5 State Department Official, with the centers of all 10 green-and-black stamps inverted (Scott O69P4a), reportedly once had a twin, though the other sheet has since been broken up.

“One of the greatest United States proofs in existence,” according to Siegel, the sheet sold for $59,000.

On June 28, Siegel offered the fifth part of the Grant Inman collection, this time devoted to private die match and medicine stamps.

This category of revenue stamps includes those used to pay duties that arose during the Civil War on small proprietary items such as matches and medicines.

They were printed mainly by the federal government, from designs dictated by private firms who retained the dies. The stamps remained in use for about 20 years.

Many have fascinating topical designs or intricate engraving, and they provide a window into a bygone era of American business, when branding and marketing were in their infancy.

Their one common element is the wording “United States Internal Revenue.” On smaller stamps, various abbreviations (such as “U.S. Int. Rev.”) are used.

The star lot, featured on the cover of the Inman sale catalog, was a unique example of the 1¢ Maryland Match Co. stamp on watermarked paper (Scott RO131d).

The story of how this and other revenue rarities came to the collecting market is the stuff of philatelic legend.

The father of a young collector in Worcester, Mass., named Edward Phelps was acquainted with the clerk at the Bureau of Internal Revenue, whose job it was to destroy obsolete remainders.

The clerk had a habit of tearing one stamp out of every sheet to be destroyed and keeping it as a souvenir. He sold an envelope filled with such salvaged stamps to Phelps’ father for $25 in the mid-1880s.

The lot included an unissued playing card stamp, which Phelps Sr. promptly resold to a collector for $50, and a stash of others that eventually were passed on to young Edward.

Phelps Jr. later realized that one of them, the 1¢ Maryland Match Co. stamp, was a watermarked variety that collectors had learned about from bureau records but presumed non-existent. More than a million had been printed during 1882-83, but for whatever reason they were later destroyed.

When Phelps sold his collection in 1906, the stamp was damaged at top by an assistant at the auction firm. This was later repaired.

Three surviving examples are known, two with their perforations trimmed off — the Inman example being one of the latter. It sold for $11,800.