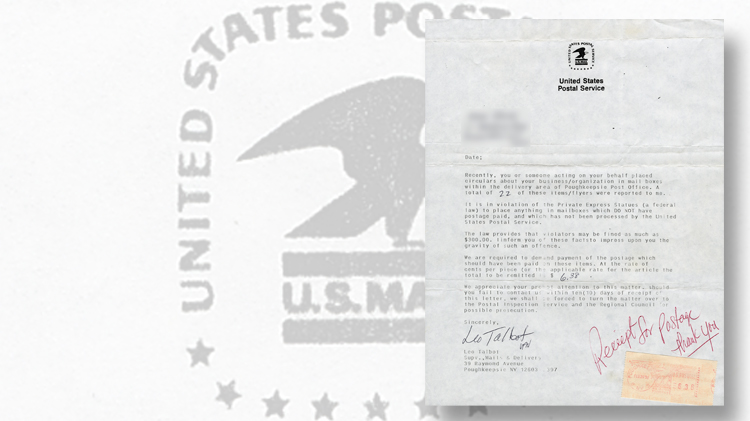 This official form letter from the Poughkeepsie, N.Y., post office threatens prosecution because the addressee (the name and address have been graphically removed) put unpaid circulars in local mailboxes, costing the United States Postal Service $6.38 in

The United States Postal Service defines the Private Express Statutes as “a group of federal civil and criminal laws that, for the most part, make it unlawful for any entity other than the U.S. Postal Service to send or carry letters over post routes for compensation unless appropriate postage is paid in an amount equaling what would have been paid had the letters been sent through the Postal Service.“

The letter shown with this column deals with one of these statutes: the depositing of mailable matter “on which no postage is paid” in a mailbox “with intent to avoid payment of lawful postage thereon.”

The name and address of the addressee have been graphically removed from the letter.

Although the letter is not dated, the postage receipt in the form of a meter at the bottom of it is dated Feb. 26, 1991.

Signed by the Poughkeepsie, N.Y., supervisor of mail and delivery, the form letter states:  “Recently you or someone on your behalf placed circulars about your business/organizations in mail boxes within the delivery area of Poughkeepsie Post Office. A total of 22 of these items/flyers were reported to me.

“It is a violation of the Private Express Statues [sic] (a federal law) to place anything in mailboxes which DO NOT have postage paid, and which has not been processed by the United States Postal Service.

“The law provides that violators may be fined as much as $300.00. I inform you of these facts to impress upon you the gravity of such an offence. … ”

The letter goes on to demand the postage that should have been paid on the 22 items: a total of $6.38 (at 29¢ for each of the 22 circulars, with no nonprofit or printed matter discount).

The letter ended by saying that if the addressee did not contact the post office within 10 days, the matter would be turned over to the Postal Inspection Service for possible prosecution.

The fact that a form letter had been created is evidence that this problem happened often enough to require one.

I thank Art Groten for sharing the letter.