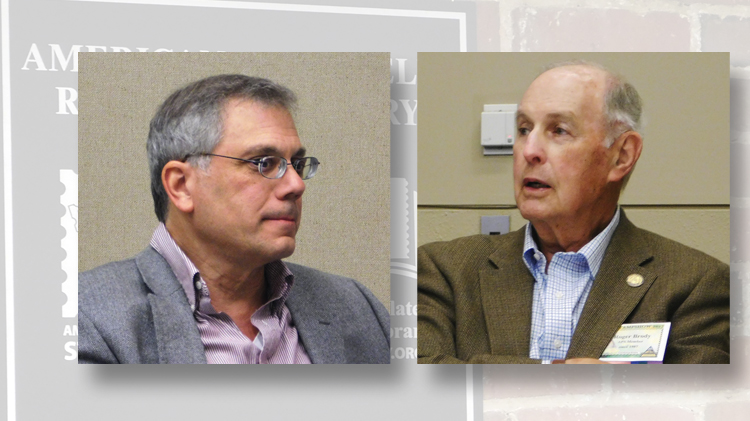 Steven Zwillinger (left) is the new president of the American Philatelic Research Library board of trustees. He replaces Roger S. Brody (right) who completed his term as president, but will remain on the library board as a trustee.

The American Philatelic Research Library board of trustees has elected Steven Zwillinger as its president.

Zwillinger, who has served on both the APRL board and the American Philatelic Society board of directors, is filling the position vacated by Roger S. Brody, who stepped down as president following the completion of his term.

Zwillinger was elected unanimously Aug. 4 by a voice vote of the APRL board during an organizational meeting that immediately followed the adjournment of the general board meeting.

The organizational meeting began with the swearing in of three interim trustees who will serve on the APRL board until the 2019 election of new trustees. Incumbent board members Brody, Walker, and Don Heller were administered the oath of office by APS/APRL attorney Kathleen Yurchak.

The board then nominated Zwillinger and Walker and unanimously approved their elections as officers.

Zwillinger has been a stamp collector since 1963, and has had articles published in the Philatelic Literature Review, the Philatelic Exhibitor, and elsewhere.

His exhibits of India and Burma have won gold medals, and he recently wrote and published The Path to Gold: 175 Proven Stamp Exhibiting Tips, a compilation of articles from his column in The American Stamp Dealer & Collector.