You be the expert: items that look like errors 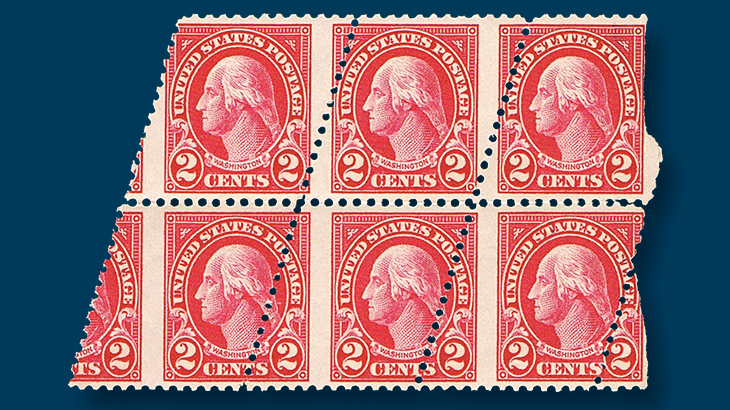 This block of 2¢ Washington stamps was damaged in perforating. While all perforations are present, the vertical rows are misplaced. The block comes from a part of a sheet that has no kraft paper repair. 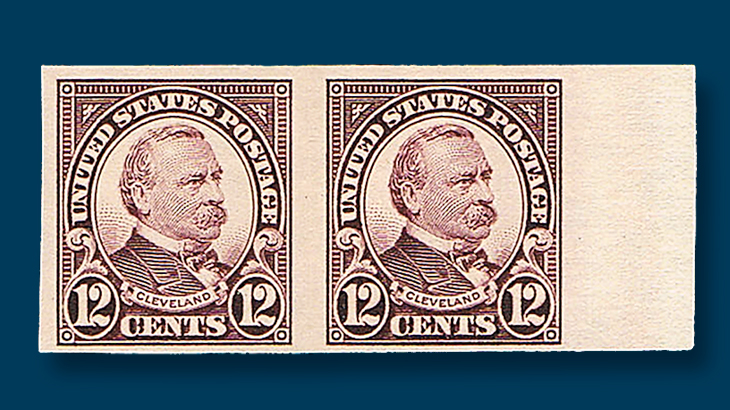 Fully imperf, this margin pair of 12¢ Grover Cleveland stamps might qualify for a listing in the catalog, except that there were horizontal perforations on the bottom of the pair. They have been clipped off. 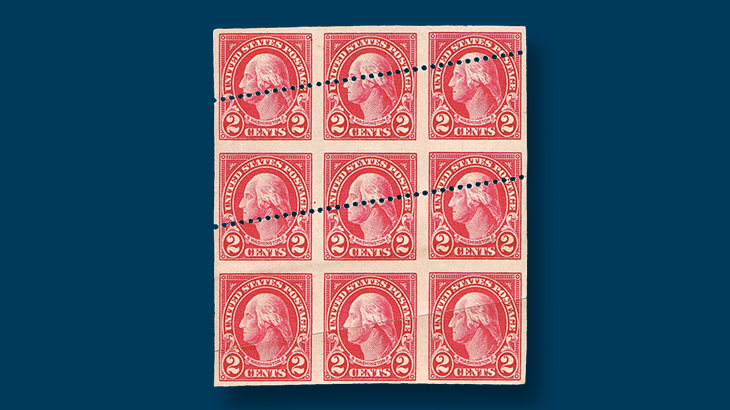 This block of nine is imperf vertically, and has a kraft paper splice over the back of the bottom row of stamps, which were split while making the repair. Because the stamps are split, they do not qualify for error status. 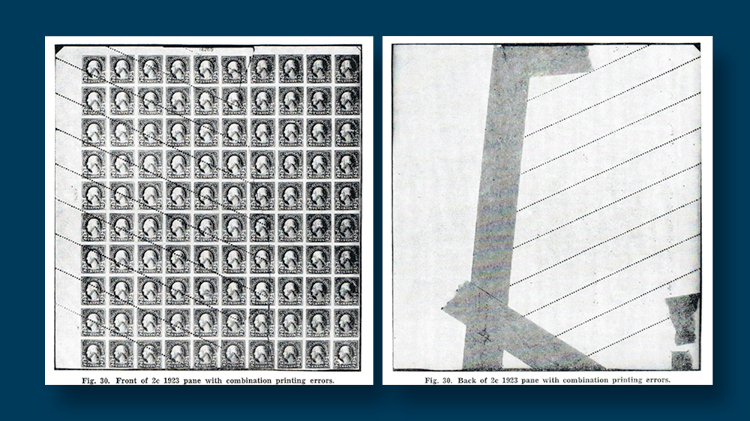 These illustrations from Dr. Stanley B. Segal’s Errors, Freaks and Oddities on U.S. Stamps: Question Marks in Philately show a 2¢ Washington pane of 100 that has 10 rows of perforations on the diagonal, but on only seven rows of stamps. As can be seen fro 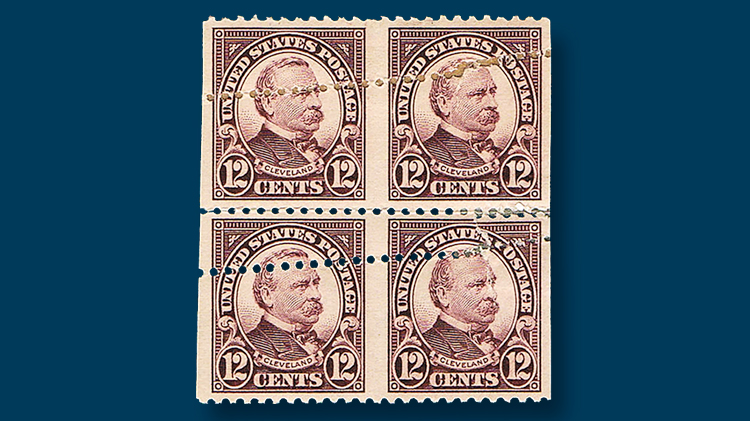 Seemingly double-perfed horizontally, this block of 12¢ flat plate Grover Cleveland stamps is not a vertically imperf error because both the horizontal and vertical perforations are present. Two of the vertical holes can be seen in the margin between the 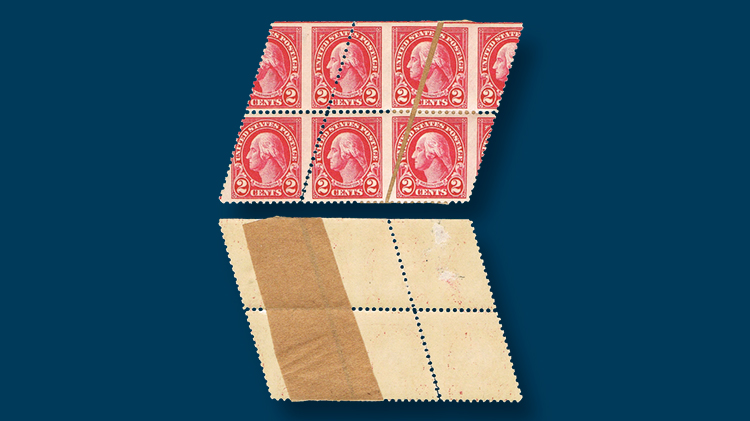 Shown front and back is a block of the 1922 2¢ Washington flat plate, perf 11 by 11 stamps that were damaged and repaired during perforating. The repair was done with brown kraft paper, as can be seen on the back, and on the front in the second full verti
Previous
Next

If you were an expertizer, how would you describe the five stamp multiples shown with this column? They are four mint Fourth Bureau Issue (1922-1938) blocks and one pair, all from the perf 11 by 11 flat-plate set of 1922.

Pictured first is a 2¢ Washington block with a kraft (brown) paper repair that can be seen on the back and on the front in the diagonal gap in the third vertical row. The block has normal horizontal perforations and three rows of vertical perforations on a diagonal through the first, second and fourth vertical rows.

The second item is a similar block, without kraft paper and fully perforated vertically, but all the vertical perfs are on the diagonal.

The third, a block of nine of the 2¢, has a kraft paper repair on the back covering the bottom row. It has no vertical perforations, and only two rows of horizontal perfs on a diagonal through the top two rows. The bottom row is completely imperforate, but split on a diagonal and spliced together.

The fourth example is a 12¢ Grover Cleveland block of four with normal horizontal perfs, and an additional row of horizontal perfs through each horizontal row. It also has a kraft paper repair on the back of the top row.

The final item is a horizontal pair of 12¢ Cleveland stamps that appear to be totally imperf. There is no kraft paper repair.

Before we get to the descriptions, a little background on the use of kraft paper is helpful.

Repairs using kraft paper affect only the flat-plate printings of the early 1920s. No such repairs are known earlier; a different method of repair was used for the Third Bureau Issue (the Washington-Franklins). Also, none are known later, after the Bureau of Engraving and Printing changed over to rotary press production of sheet stamps.

Kraft paper was used for repairs and splices when the perforating process went wrong.

If a sheet or half sheet caught an edge, or got stuck or crinkled when inserted, the resulting perforations may be where they shouldn’t be, may be missing in one or both directions, or may be torn.

Keep in mind that the paper used for postage stamps was expensive, and the object was to waste as little as possible. So, enough repair would be done so that the sheet could be completed, and a half or even a quarter saved as completed work.

Of course, the waste was not supposed to get into circulation, but inevitably some of it was mistakenly put in the pile of properly perforated work.

Some of these stamps would ultimately be removed by post office window clerks as defective, but some were purchased by patrons. The patrons could then decide to use the stamps as postage, or perhaps throw them away.

Also, some defective panes found their way to dealers, where they were broken up and sold to collectors. There is no doubt in my mind that all five of the items shown here came from larger kraft-paper repaired panes.

This is scarce material, which properly identified, has value. So getting the description right is important.

Let’s now look at each of the items to see how they should be described.

The first example has no vertical perforations in the third vertical row, and because of this, you as the expertizer may be tempted to call that row imperf vertically. However, because the stamps are split and spliced, they are not complete stamps and don’t warrant being treated as errors.

So, both the first and second blocks are properly described as misperforated stamps with vertical perforations on the diagonal. The first block would get an additional note on the expertizing certificate about the kraft paper repair.

The third block is imperf vertically, but in addition the bottom row is totally imperf. If they were not spliced stamps, they would be candidates for listing as an error, but they are spliced on a slight diagonal — though it is an artful job and difficult to tell without a magnifier. As I have already noted, spliced stamps are not given error status.

The first 12¢ Cleveland piece, the block of four, is properly perforated horizontally and has no kraft paper on the reverse, but the vertical perforations are displaced so that they look like a second set of horizontal perforations. The result is a block that appears to be imperf vertically, but the vertical perfs are present but just in the wrong place, so this will not count as an error.

The problem is that the Scott Catalogue of Errors on U.S. Postage Stamps, 16th edition, by the Stephen Datz, pictures Scott 564a without a second row of perforations.

Datz also mentions our fifth example: “Imperforate pairs of No. 564 almost certainly are trimmed from pairs of No. 564a that occurred at the top of the pane and contained a natural straight edge along the top edge.”

My example is described in its certificate as “No. 564a … genuine, natural straight edge at top with perforations trimmed off bottom.”

In summary, this material is tricky, and the expert needs to understand the production process and how the stamps are sometimes misdescribed to enhance the hoped-for sale value.

Clearly, anyone contemplating purchasing one of the items as an error must insist on its having a certificate.

In preparing this article, I consulted a wonderful little book by Dr. Stanley B. Segal, Errors, Freaks and Oddities on U.S. Stamps: Question Marks in Philately. Published by the Bureau Issues Association (now the United States Stamp Society) in 1979, it is the first published systematic treatment of U.S. EFO categories and their causes. As such, it was my primer in the area when I began to get serious about this branch of U.S. stamps.

Segal’s book devotes a few paragraphs to kraft paper varieties and illustrates them with the two pictures of a 2¢ Washington pane that are shown on page 8.

Segal wrote the following about this upper left pane, plate number 16269, from a sheet of 400:

“In this case the upper left pane was torn and twisted during the perforating operation. The sheet was at this time retrieved by a plate printer and an on-the-spot repair was fabricated using Kraft paper tape on the reverse side. The sheet was then hand-cut into its four component panes of 100 stamps each, and by some strange quirk escaped the confines of the Bureau.

“The pane has ten rows of ‘horizontal’ perforations running diagonally through approximately the first six vertical rows of stamps. There are no vertical perforations because the sheet was caught before this stage and the paste-up repair made. What initially appear to be vertical misperfs are in reality imperforate vertically errors, but with freak horizontal perforations …

I would argue with Segal on only two points. The minor one is that I am not sure that the plate printers made the repair. It stands to reason that the operators of the perforators would do that.

More substantial is the fact that so long as the imperforate stamps are connected to a part of the pane that shows errant perforations, it is clear that they are errors of perforation and not the regularly issued imperfs.

Being reminded of this pane and the error, I opened my 2018 Scott Specialized Catalogue of United States Stamps and Covers to see if the imperforate error were listed. It isn’t. So I asked Scott editor emeritus Jim Kloetzel, who has been for many years the man at Scott who oversees the listings for U.S. errors and varieties (among other things), whether it ought not get a listing?

Kloetzel agreed that it should be listed, but also asked if I knew the whereabouts of the pane. I don’t, as I don’t know how Segal’s collection was dispersed. It must be out there somewhere, and both Kloetzel and I would be interested to know if it still exists whole, or if it has been broken up.

Segal’s book is out of print, but it can be found on the website of the EFO Collector’s Club. The United States Stamp Society also has an excellent website.