Christmas card includes revenue replicas and a quote about collecting 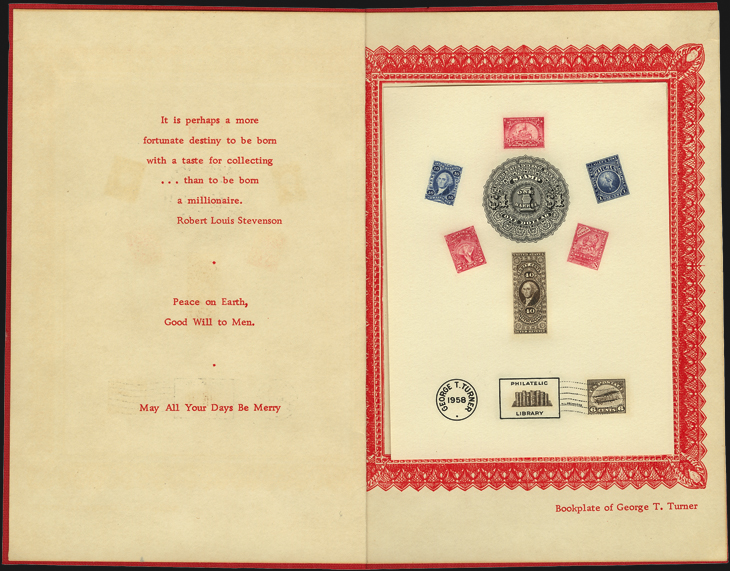 This 1958 Christmas card from philatelic legend George Turner (1906-1979) is a double prize. The inside of the card includes one of his book plates with engraved copies of several United States revenue stamps and also contains a quote from Robert Louis St

A graduate of Cornell University with degrees in chemistry, he left a career in business to head the United States Post Office Department’s Division of Philately in 1958. He was the acting curator of the Smithsonian Institution’s philatelic collection from 1959 until 1962, and was chairman of Sipex, the Sixth International Philatelic Exhibition, held in 1966 in Washington, D.C.

Turner was also a passionate collector of philatelic literature and amassed what was acknowledged to be the best philatelic library in the United States. In addition, he was active as an officer and committee chairman of the American Philatelic Society for nearly 30 years, starting with his election to a director slot in 1951.

In recognition of his many involvements and accomplishments he was elected to the Roll of Distinguished Philatelists in 1978.

Another highlight inside the card is the following quotation from Robert Louis Stevenson:

“It is perhaps a more fortunate destiny to be born with a taste for collecting … than to be born a millionaire.”

The outside of the card is red with the words “Happy Holidays” in white. There also are holiday greetings below Stevenson’s quote in the inside of the card.