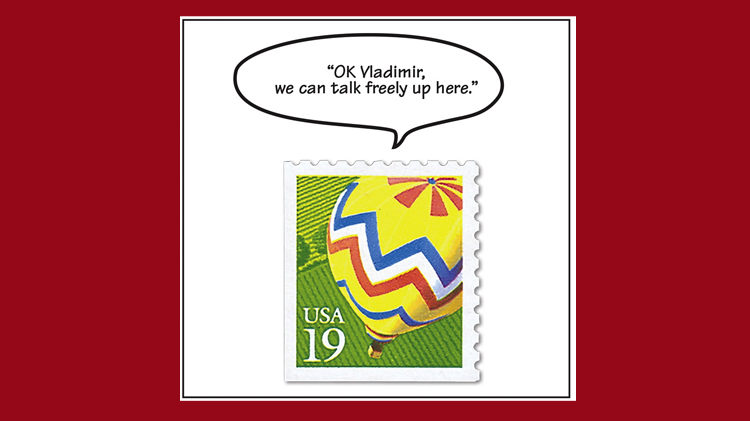 Hot air was the most used theme for the cartoon caption contest for November featuring the 1991 19¢ stamp depicting a colorful hot air balloon (Scott 2530).

Most of the entries were nonpartisan, and in that spirit, here is one of them, “Guess what I’m going to name this big bag of hot air?” from Michael Morrissey of Westerville, Ohio.

A different approach was taken by Neil Bys of San Antonio, Texas, “Should we stop by Washington, D.C. for more hot air?”

The increase in the cost of U.S. postage projected for January received quite a bit of attention. This example came from Steve Sonder of Albany, N.Y., “Quick, throw over more ballast, we can’t keep up this these rising postal rates.”

Current front-page news also inspired some contest entrants. “Wait until they see that North Korea also has an Air Force!” from Laura and Tom Tomaszek of Cedar Rapids, Iowa, tickled my funny bone.

That genre also gives us the nonphilatelic winner from Ray Cartier of Arlington, Texas.

On the philatelic side, Rick Howell of Bedford, Texas, takes the honors with “It may not be a zeppelin, but it fits my budget!”

“Hmmm. All this hot air reminds me to get out and vote,” from Tom Spina of Virginia Beach, Va.

“Oh, my! I can see Russia from here,” sent by Ernest Stevens of East Point, Ga.

“We’re somewhere between a blip and a blimp on the radar screen,” from Rosemary Harnly of Red Wing, Minn.

“This is the last time I take out a mortgage with balloon payments!” by Steve Kotler of San Francisco, Calif.

“WOW — amazing that this ride cost us only 19¢ each!” from Stewart Lyons of Woodmere, N.Y.

“Great! Linn’s comes by drone now. How cool is that!” from Gerald Boren of Mesa, Ariz.

The next cartoon caption contest will be announced in the Jan. 8 issue of Linn’s.