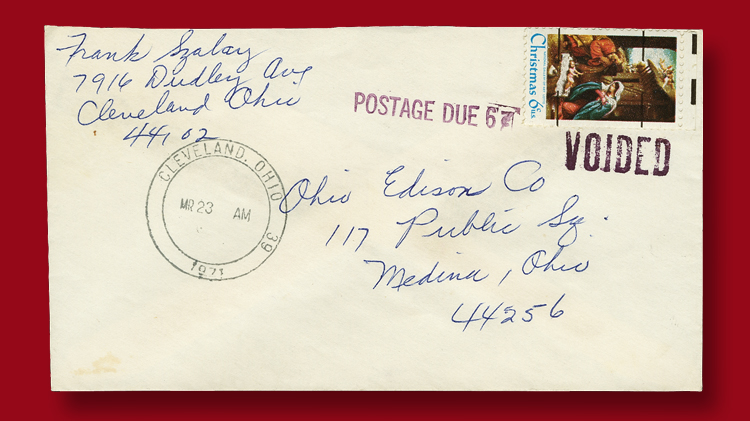 The use of the demonetized 6¢ Nativity stamp was disallowed on this March 23, 1971, cover, which was charged 6¢ postage due. 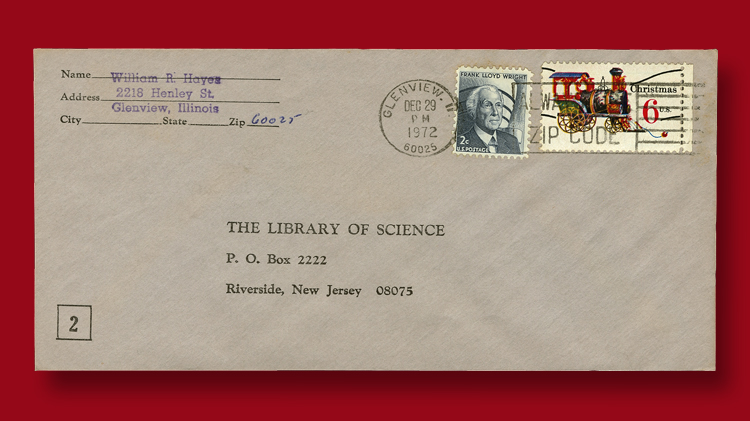 This December 1972 cover shows that the Post Office Department reversed its policy and allowed the use of the 1970 Christmas precancels. They remain valid. 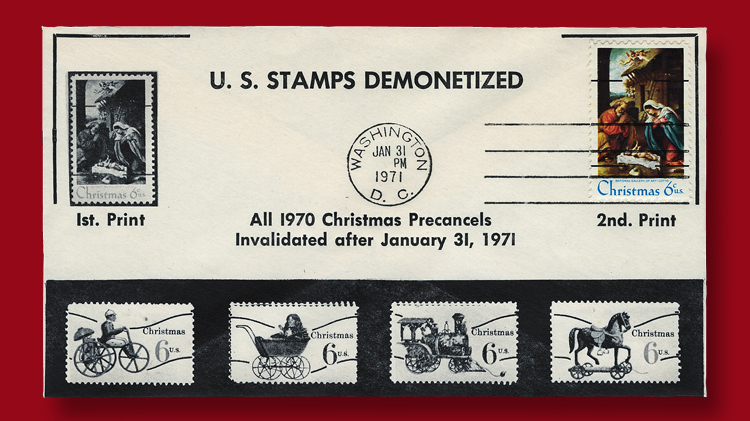 This commemorative cover was canceled in Washington, D.C., Jan. 31, 1971, the date that the 1970 Christmas precancels were demonetized by the United States Post Office Department in an attempt to prevent reuse. 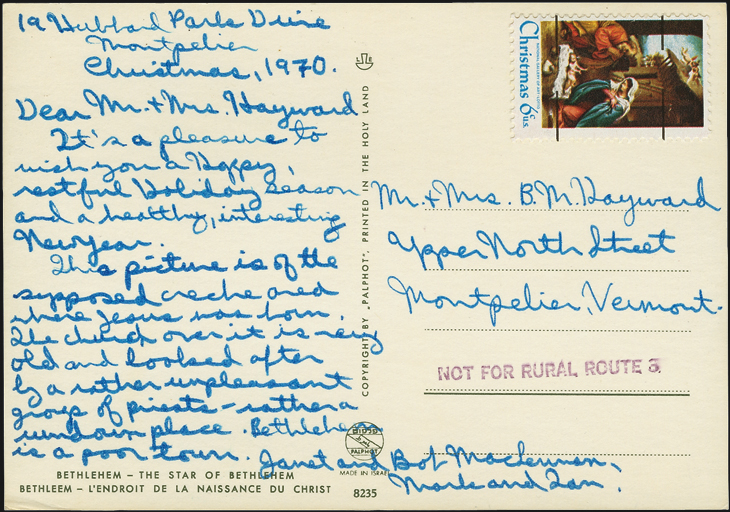 The intended use of a 1970 Christmas precancel is shown on this postcard dated in the message as “Christmas 1970” and sent from Montpelier, Vt.
Previous
Next

The first cover shown here tells several different stories about the five 6¢ Christmas stamps issued Nov. 5, 1970. This information also can be documented with mostly inexpensive usages of the stamps from 1970 and 1971.

Four of the stamps show toys from an earlier era: a tin and cast-iron locomotive, toy horse on wheels, mechanical tricycle and doll carriage (Scott 1415-1418).

The fifth stamp reproduces a Nativity painting by Lorenzo Lotto (Scott 1414). The first of two printings was issued on Nov. 5.

These five Christmas stamps also were precanceled for experimental use in 68 cities (Scott 1415a-1418a). It was hoped that skipping the cancellation stage would speed the mail flow.

The 6¢ Nativity precancel was used on the postcard pictured here, so the cancellation process was skipped. According to the message side of the postcard, it was sent in December 1970 from Montpelier, Vt.

Following are other important dates related to these stamps.

On Nov. 27, 1970, the second printing of the 6¢ Nativity stamp was issued both precanceled and not precanceled.

On Jan. 31, 1971, the precanceled versions of the Nativity and the four Toys stamps were demonetized by the United States Post Office Department (the predecessor of the U.S. Postal Service), because of a fear that they might be reused.

Pictured nearby is a cover dated March 23, 1971, on which the 6¢ Nativity precancel was disallowed, and postage due was charged.

A short while later in 1971, the Post Office Department relented and again allowed use of the precanceled 1970 Christmas stamps. They remain valid today.

The fourth cover shown demonstrates a valid usage after the Post Office Department changed its mind. This Dec. 29, 1972, cover is franked with a precanceled Tin and Cast-iron Locomotive Christmas stamp and a 2¢ Frank Lloyd Wright stamp (Scott 1280) of the Prominent Americans series.

Also not easy to find are uses of the precancels as intended from the 68 cities that participated in the experiment. Since these covers will not bear a cancellation, only a return address tells you that this is one of those unusual covers.

That this experiment was not deemed a success is documented by the fact that many covers franked with the precanceled stamps received cancellations despite not needing them.

As for the two printings of the Nativity stamps, the Scott Specialized Catalogue of United States Stamps and Covers gives the following points of identification:

On the first printing of the precancels, the lines are grayish black, while they are intense black on the second printing.

Many collectors are satisfied with a single stamp to fill an album space, but there is much more challenge available to the collector with a sense of adventure.