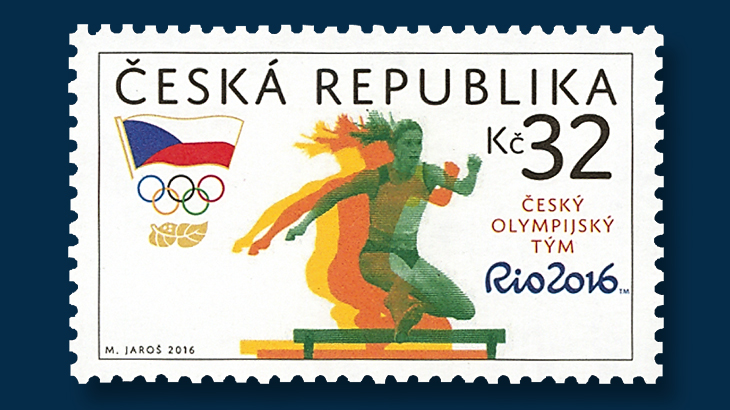 Thirty-year-old hurdler Zuzana Hej­nova is alleging the Czech Post has used her likeness for the stamp without obtaining permission.

According to the Czech Republic’s daily newspaper Mlada fronta Dnes, Hejnova is seeking 1 million koruna (equivalent to approximately $46,000) in the case, where she claims the image was created from a 2012 photo from the London Summer Olympics.

The Czech Post maintains the image depicts an anonymous hurdler and wasn’t made to look like Hejnova.

The star hurdler earned a bronze medal at the 2012 London Games for the women’s 400-meter hurdles with a time of 53.38 seconds.

Mlada fronta Dnes reports if Hejnova is successful in her claim against Czech Post, she will donate the proceeds to “athletic preparation for children.”

Titled “Czech Olympic Team,” the 32-koruna commemorative stamp was printed by offset in sheets of 50. It was issued June 22, 2016. In its new-issue announcement, Czech Post describes the design as showing “a female runner jumping over a hurdle.”

The stamp is currently in stock on the Czech Post’s web shop.