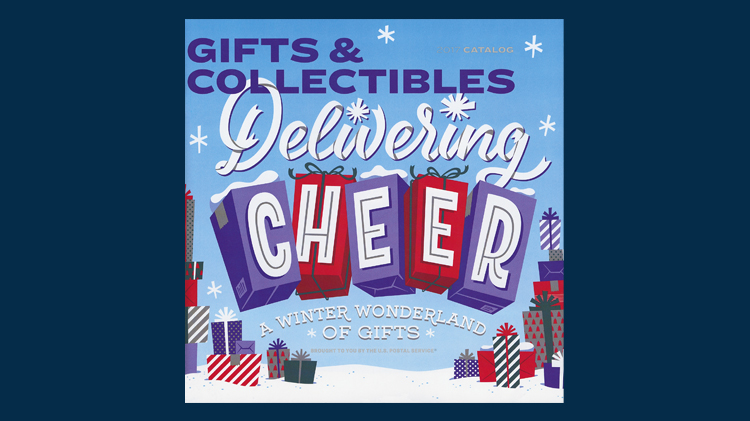 The cover of what the United States Postal Service is calling its Gifts and Collectibles product catalog that hit mailboxes in late November.

It’s time once again to cast your vote! Linn’s 2017 U.S. stamp popularity poll is an enjoyable way for you to express your thoughts about the stamps issued this year by the United States Postal Service.

As I pondered the 2017 United States stamp program while we prepared this year’s annual Linn’s U.S. stamp popularity poll, the catalog pictured here arrived in my office mailbox. The U.S. Postal Service calls it the 2017 Gifts and Collectibles catalog, and in 60 large-format pages it highlights many of the new issues from the year, with a heavy emphasis on products that were created to complement the stamps. For example, for the Total Solar Eclipse forever stamp, the catalog showcases a folio, a frame with the stamps, a keepsake that includes a pane of the stamps and a digital color first-day cover, and a press sheet.

The catalog also introduces a number of icons that are shown above the stamp issues to indicate product availability. A spread inside the catalog explains what each icon stands for, such as first-day cover, stamp, press sheet, note cards and so on.

Having a holiday catalog isn’t something new for the Postal Service. However, it’s obvious that someone put a significant amount of time and effort into the layout of the catalog in an attempt to reach a general audience with an awareness of stamps.

I hope it delivers results for the Postal Service, because any positive momentum for stamps is a win. My only wish is that the cover of the catalog would have shown a stamp design so recipients would know at a glance what they are getting in the mail.

The tradition of the annual Linn’s U.S. stamp popularity poll continues in this issue. The poll first started in Linn’s in 1948. This is not a scientific poll. The poll is meant as an entertaining way for you to share your thoughts about the stamps and postal stationery items issued by the U.S. Postal Service this year.

If you’re looking for an activity for an upcoming stamp club meeting, make copies of the ballot in this issue and have club members cast their votes. The completed ballots can be submitted together in a single envelope.

Mail-in ballots must be postmarked no later than March 1, 2018, to be counted. Voting online begins Dec. 5.

The results will be announced in an issue of Linn’s in late spring.