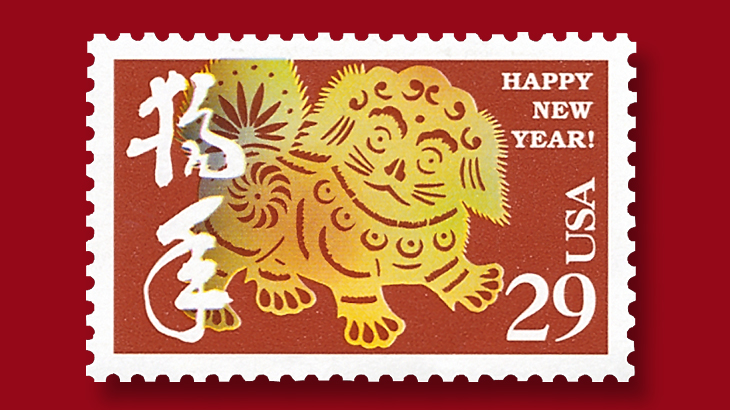 The 29¢ U.S. Happy New Year stamp issued Feb. 5, 1994, features Clarence Lee’s cut-paper design of a dog to celebrate the Year of the Dog. The new 2018 stamp reproduces this design in the upper left corner of the new forever stamp. 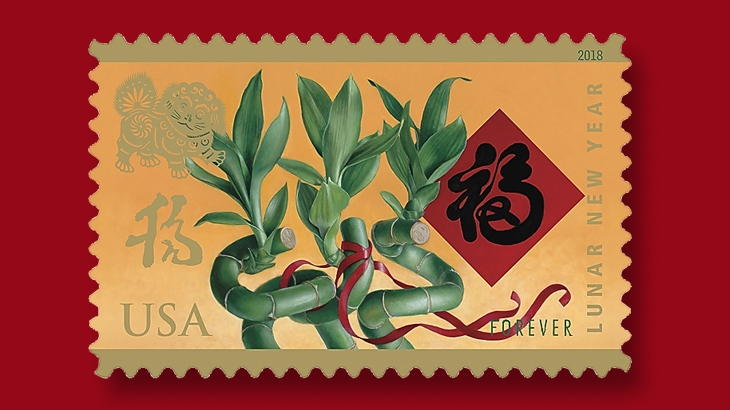 Lucky bamboo, a popular houseplant associated in many countries with good fortune, is featured on a new forever stamp from the United States Postal Service.

The nondenominated (49¢) forever commemorative stamp is the latest issue in the USPS Lunar New Year stamp series. It is the 11th stamp in the series, all of which have featured a painting by Hong Kong-born artist Kam Mak, who grew up in New York City’s Chinatown and now lives in Brooklyn.

The stamp will be issued Jan. 11 in Honolulu, Hawaii, according to information announced Dec. 19 by the U.S. Postal Service. Plans for the Postal Service’s first-day ceremony were not released in time to be included in this report.

Technical details for the new stamp were not revealed either, but it is expected the stamps will be issued in a pane of 12 that matches the format followed by the 10 previous stamps in the current U.S. Lunar New Year series.

The technical details will be published in Linn’s when they become available.

Twelve stamps are planned in this series to complete the full zodiac cycle of lunar years observed in many Asian cultures. Each year in the repeating cycle is identified and characterized by a specific animal.

The 12th stamp in this USPS series, for the Year of the Boar, will presumably be issued early in 2019.

Mak’s artwork in this series has focused on common ways the Lunar New Year holiday is celebrated, according to the Postal Service.

A professor at the Fashion Institute of Technology in New York City, he has also illustrated children’s books, including The Dragon Prince by Laurence Yep, and The Moon of the Monarch Butterflies by Jean Craighead George. His own illustrated book, My Chinatown: One Year in Poems, was published by Harper Collins in 2001. Mak’s work has appeared on the cover of Time magazine and in numerous other prominent publications.

His designs for this series have featured various cultural elements associated with New Year celebrations, including red paper lanterns, firecrackers and drums. The 2016 stamp for the Year of the Rooster included Mak’s painting of a red envelope with a colorful rooster design as its main feature.

In an email interview with philatelic columnist Dingguo Dai, a retired chemist and longtime Linn’s contributor, Mak explained some of the symbolism in the design.

He told Dai that he doesn’t remember seeing lucky bamboo during the new year when he was growing up, but he considers it a modern tradition, adding that his mother has the plants in her home during the lunar new year.

“I specifically chose three stalks of lucky bamboo on the stamp because it is one of the most favorite number combinations to have in your home,” Mak said.

Despite its name, the plant known as lucky bamboo, Dracaena braunii, is from the taxonomic order Asparagales rather than the order Poales of the bamboo family.

The decorative lucky bamboo, sometimes found curled or intertwined, is thought to be associated with prosperity and good fortune, and is often kept in homes for that reason.

On the right side of the design is a red square positioned on one point (diamond shape) with additional script characters, which Mak explained represent the word “Fu” written on red paper.

The color red has been used to symbolize luck in Chinese culture. The word “Fu” stands for good fortune or happiness, according to Mak.

Recalling his childhood in Hong Kong, Mak told Dai, “My Grandma would pay someone to write Fu and other couplets on red paper by hand, and she would post them around the house just before the New Year.”

Mak said that he wrote the character for the stamp design using a Chinese brush and black ink, and added that he practiced by writing many versions of it until he was happy with the one used on the stamp.

Dai’s interview, which he provided to Linn’s, is for a Chinese report he is preparing about the stamp.

Printed in the upper left corner is the image of a dog originally created as a cut-paper design by Clarence Lee for the first USPS Lunar New Year series of 12 stamps, issued between 1992 and 2004. Lee died in 2015 at age 79.

Below the dog is the word “dog” as written by Lau Bun in Kanji script using grass-style calligraphy. That same flowing inscription first appeared on the 29¢ Year of the Dog stamp in 1994 (Scott 2817).

Lettering in English on the new stamp includes “USA” at lower left, “Forever” at lower right, and “Lunar New Year” reading up along the right edge.

The 2018 year date is printed in small type in the upper right margin.

If the Postal Service does not deviate from its past Lunar New Year series issues, it is expected that two uncacheted first-day covers will be offered, one with a black cancel, and the other with a pictorial color postmark including a rendition of Lee’s cut-paper dog illustration.

A press sheet with die cuts is also possible. Those details and others also will be confirmed when the Postal Service releases its technical production information.