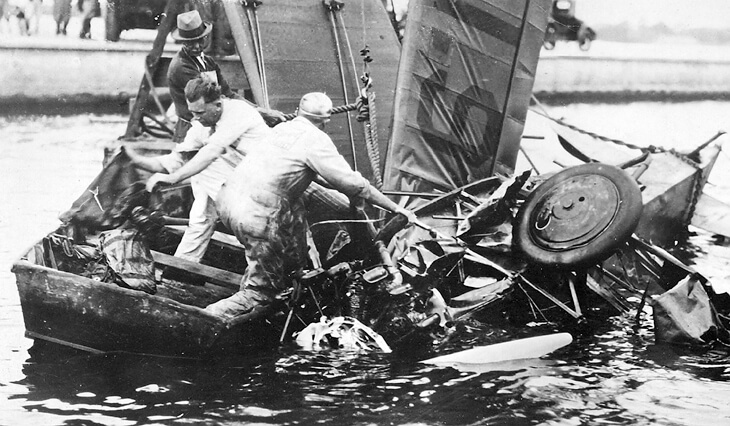 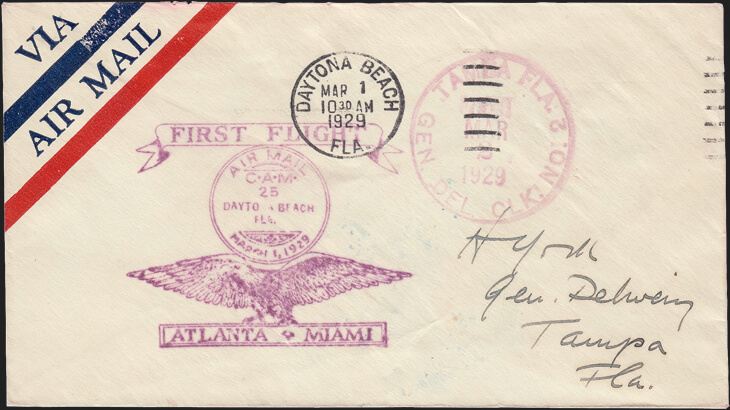 This 1929 contract airmail (CAM) cover from Daytona Beach, Fla., to Tampa is missing its stamp and shows obvious signs of having been submerged in water.
Previous
Next

It’s not news that nice finds can be made in the junk boxes at stamp shows.

So it should come as no surprise that the once-waterlogged cover shown in the first illustration is more than simply a damaged cover salvaged from someone’s damp basement. There are no markings to indicate otherwise.

What is obvious: This is a 1929 first-flight cover for CAM (contract airmail) 25, an inaugural flight from Daytona Beach, Fla., to Tampa (one of two spurs added to the already-established Atlanta-to-Miami airmail route).

It was postmarked March 1, 1929, at Daytona Beach, and is missing its stamp. The envelope’s glue disintegrated in water, leaving all flaps flapping. But what is not obvious is how it ended up in this condition.

One important clue is the presence of the March 2, 1929, Tampa postmark that fills part of the void left by the missing stamp, indicating it was applied after the stamp was removed – not something seen on most normal covers.

The rest of this tantalizing story comes down to a bit of sleuthing.

CAM 25, which took over the established route of CAM 10 and expanded it, was operated by Pitcairn Aviation (named for the owner, not the islands) of Philadelphia, Pa.

The company, the forerunner of what would eventually become Eastern Airlines, began carrying CAM 10 airmail the year before, on May 1, 1928, at the rate of $3 per pound, utilizing an aircraft of its own manufacture — the Pitcairn PA-5 Mailwing, of which only a dozen were built. One hangs in the Smithsonian National Air and Space Museum in Washington, D.C.

These small, open-cockpit biplanes were versatile and served as the pattern for several other types of aircraft. The expansion of the airmail route was an exciting development for Pitcairn and the affected communities.

Essentially unhurt (surprising, given the appearance of the wrecked plane), Faulkner was able to swim ashore and get help.

Faulkner and others are seen in the second photo rescuing the saturated (pre-saturation weight was 500 pounds) mail from the wrecked airplane. All mail cargo was salvaged and placed on a reserve flight to Tampa within three hours.

Upon arrival in Tampa, according to one contemporaneous newspaper account, the soggy collector mail was taken to the Orlando Steam Laundry to be dried, where postmaster Claudia Delaney and three members of her staff spent three days drying the mail, before forwarding it on to collectors.

Most of the crashed CAM 25 covers were sent on without identification, but they are known accompanied by letters of explanation, postmaster notes, and even a few pilot autographs.

CAM 25 covers are scarce, but not rare. Because they were prepared by collectors for collectors, the relative survival rate of the 500 pounds of mushy missives was pretty high.

However, a number of those covers not marked in some way have lost their identity over time. Many of these historic covers have been thrown away over the years as damaged, or consigned to the proverbial “quarter box,” awaiting eventual discovery by a sharp-eyed collector.