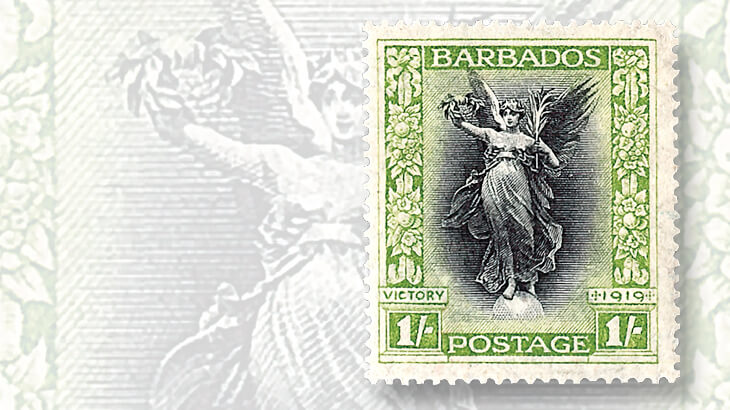 The statue atop the Victoria Memorial in London influenced the design of the shilling denominations in the Barbados stamp set marking the end of World War I. 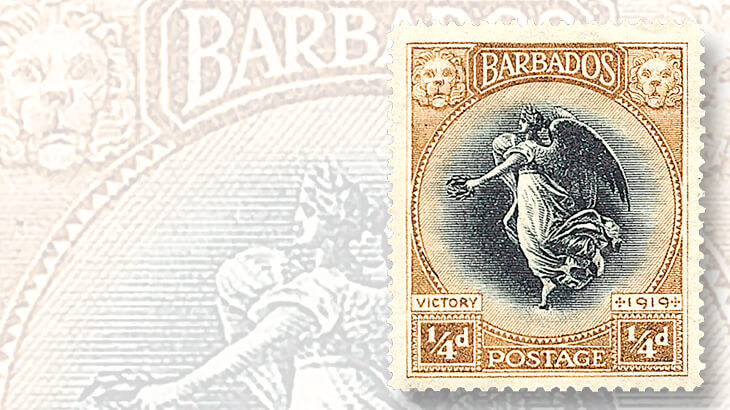 The vignette for the pence denominations of the 1920-21 Barbados Victory set was based on the statue of the Winged Victory of Samothrace in the Louvre Museum.
Previous
Next

Barbados, in the West Indies, is considered the easternmost Caribbean island, although it is surrounded by the North Atlantic.

The small island (about 167 square miles) was home to humans as early as 1623 B.C., but was first claimed by outsiders in the late 15th century, when Spanish navigators asserted ownership for the Spanish crown.

An English ship arrived in May 1625 and took possession of Barbados (spelled “Barbadoes” early on) in the name of King James I. Two years later, the first permanent settlers arrived from England, and Barbados remained a British colony without interruption until internal autonomy was granted in 1961, followed by full independence within the British Commonwealth in 1966.

Despite being some distance from the main action (though German raiders did cruise the Caribbean), Great Britain’s colonies did not spend World War I on the sidelines.

Men from the colonies enlisted in regiments from England and Canada (some even in the United States forces), and 15,600 joined the British West Indies Regiment formed in September 1915. Five thousand more men joined later.

Two-thirds of the British West Indies Regiment came from Jamaica, with the remainder from Barbados, Trinidad and Tobago, British Honduras, Grenada, British Guiana, the Leeward Islands, St. Lucia, and St. Vincent. Under the auspices of the Barbados Citizens’ Contingent, 95 volunteers left Barbados in two groups: Dec. 31, 1915, and April 5, 1916. They sailed to London where they were directed to various recruiting centers.

About 737 more men left Barbados in seven groups, the first on Sept. 20, 1915, and the last on Dec. 3, 1917. Soldiers from Barbados and Grenada were in the 1st Battalion, D Company, in front-line action in Palestine and Jordan, and in auxiliary roles in France, Egypt, and Italy.

Military records indicate that more than 1,200 members of the British West Indies Regiment were killed and more than 2,500 were wounded.

Germany surrendered on Nov. 11, 1918, and the Treaty of Versailles was signed June 28, 1919, formally ending World War I. The global conflict had claimed an estimated 35 million people, military and civilian. It’s a huge understatement to say the world was relieved by the ending of this war, and the legislature of Barbados suggested that a stamp should be issued with a victory theme.

The suggestion was made to add a “VICTORY” overprint to those issues, but that idea was set aside in favor of “a more fitting” way to mark the occasion: with a complete set of stamps in denominations from ¼d to 3 shillings.

The Crown Agents for the colonies, in London, had acted as the monarch’s administrator of the day-to-day affairs of the empire since 1833, including arranging for the printing of banknotes and stamps. Proposing a single “Victory Stamp,” the acting colonial secretary of Barbados, Thomas E. Fell, forwarded two rough designs to the Crown Agents on June 11, 1919.

They had been drawn by William L.C. Phillips, the colonial treasurer of the colony. The colonial secretary asked for approval of the design(s), how much the die and printing would cost, and when the stamps could be supplied.

The Crown Agents forwarded the letter to the printer Thomas de La Rue & Co., Ltd., in London on July 9. On Aug. 1, the firm submitted two different designs of an allegorical female figure of Victory.

After negotiations with the officials in Barbados, the Crown Agents wrote to De La Rue on Nov. 17, 1919, enclosing a letter from the island government ordering dies and plates for what was now called “an issue of PEACE stamps,” to be copper-plate printed in two colors, using both the designs proposed by De La Rue in August.

The printers replied on Dec. 1 with two new versions of the earlier designs, suitable for copper-plate printing in two operations. The two latest designs were approved on Dec. 6 by Sir William Mercer, the Crown Agent, with one design to be used for the nine stamp denominations in pence and the second design for the three denominations in shillings.

The “pence design” is based on the circa 190 B.C. statue known as the Winged Victory of Samothrace, unearthed in 1863 on the island of Samothrace in the Aegean and since then residing in the Louvre Museum in Paris. The marble statue is believed to commemorate a Greek naval triumph and depicts Nike, the goddess of victory, as a winged figurehead on a ship.

The statue is missing its head and arms; the proposed stamp design added a head and a left outstretched arm holding a laurel wreath, an ancient symbol of triumph.

The second design, for the shilling issues, is based on the statue by Sir Thomas Brock that surmounts the Imperial Memorial to Queen Victoria in front of Buckingham Palace in London. The Victoria Memorial was unveiled in 1911 but remained incomplete until 1924.

The two different designs include the word “VICTORY” and “1919,” along with “Barbados,” “Postage,” and a denomination lozenge in each bottom corner.

Ink colors were chosen in early 1920, with final approval by the Crown Agents on March 20. De La Rue promised delivery of the stamps in April, but delays led to a decision not to issue the 11 stamps of the set as they arrived in Barbados, but to wait until all of the denominations had been delivered.

By early August, all except the 2½d stamps had been received. The 2½d stamps arrived on Aug. 31, and the chief clerk of the General Post Office in Bridgetown, the capital, began to fill the 155 orders waiting from collectors and dealers, some of which had been there for a year. All the orders were filled by Sept. 9, so the stamps were put on sale in Barbados that day, and the previous Seal of the Colony issues from 1916-18 were withdrawn.

The watermark was upright on the pence issues and sideways, reading up, on the shilling stamps. All of the stamps were perforated gauge 14.

Officials thought they had ordered enough stamps to last for a year, but demand was so great that in April 1921 the 1d stamp had to be reprinted, and some denominations of the withdrawn 1916 Seal of the Colony issues were returned to sale. (In 1921, 1d for 1 ounce was the inland letter rate, as well as the letter rate to Great Britain and possessions, and to the United States.)

Watermark varieties of different denominations of the 1920-21 Victory set exist — inverted, reversed, inverted and reversed, missing “C” or “A” of the “CA” — but have not been listed in the Scott Classic Specialized Catalogue of Stamps and Covers 1840-1940.

A British philatelic website at www.barbadosstamps.co.uk posted an article March 15, 2016, announcing the discovery of a new watermark variety in the 1920 Victory issue. It was found by an Australian stamp dealer and certified by the Royal Philatelic Society London. The discovery stamp is a variety of Scott 144, the 2½d ultramarine and dark blue, missing the “A” in “CA” in the Multiple Crown and CA watermark.

Individual values for the 1920-21 Victory set of 12 stamps range widely in the Scott Classic Specialized catalog, from 35¢ to $57.50 for an unused example of each denomination, with used examples generally commanding a higher value. The catalog value for the entire set is $178.60 unused and $322.95 used.