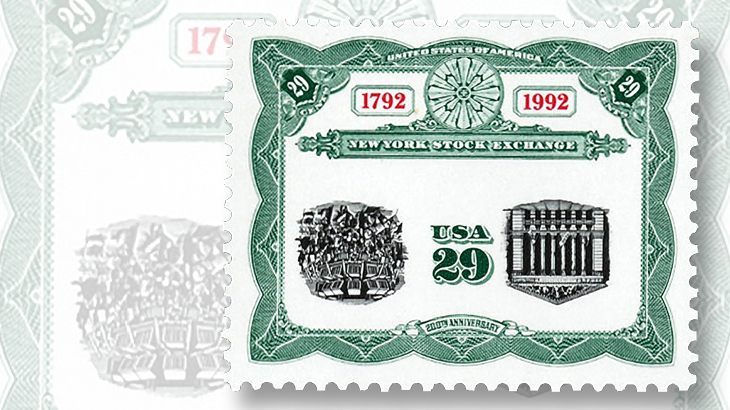 A mint example of the 1992 25¢ Stock Exchange stamp invert error sold for $10,350 at the Cherrystone auction in New York City. 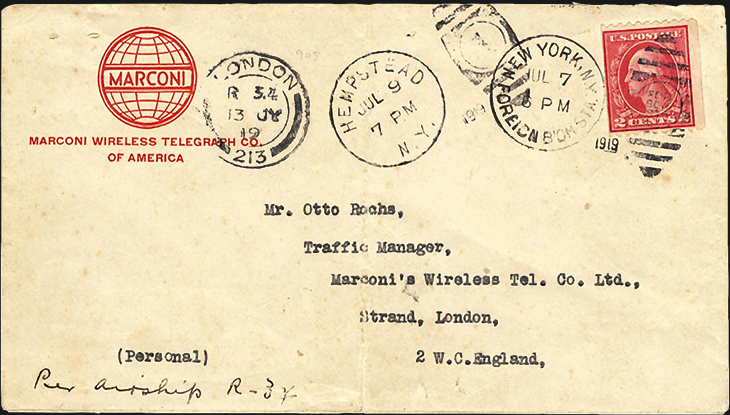 An artifact of the 1919 dirigible round-trip flight from England to New York and back again sold for $4,025 in the January Cherrystone auction. The cover flew on the return leg of the flight. 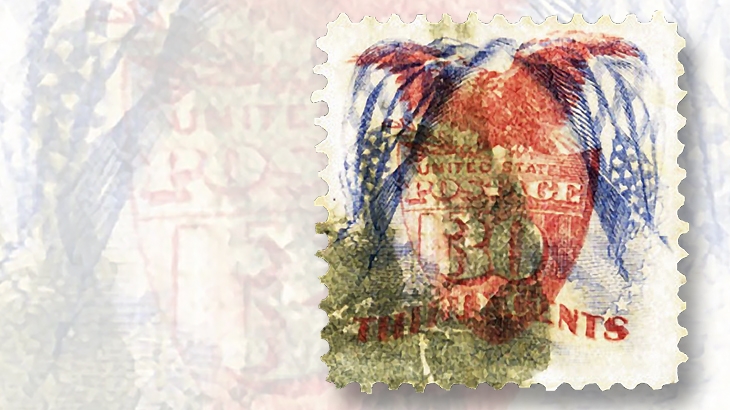 Cherrystone Auctions held a sale of U.S. and worldwide stamps and covers on Jan. 10-11 in New York. The auction was previewed on the front page of the Jan. 2 issue of Linn’s.

The star lot was a used example of the rarest of the 1869 inverted-color errors, the 30¢ Eagle and Shield with the blue flags printed topsy-turvy (Scott 121b).

Fewer than 50 of this iconic invert are known (40 of them used and seven unused), and many are either in museum collections or faulty in some way. Of the seven used examples that are confirmed sound, the one offered by Cherrystone is one of the finest in terms of centering and cancellation.

The stamp was hammered down at its opening bid of $72,500, or $83,375 including the 15 percent buyer’s premium charged by Cherrystone on all lots.

A range of other famous U.S. inverts was offered in the sale, including the last one ever produced, the 1992 25¢ Stock Exchange bicentennial commemorative. That error, whose design mimics a classic stock certificate, shows the twin black, intaglio-printed images of the New York Stock Exchange facade and trading floor inverted within the green frame (Scott 2630c).

Just two panes containing a total of 56 examples of this error were ever discovered, making it one of the rarest late-20th-century stamps. It sold for $10,350.

Postal history in the sale included a number of early airmail covers, several of which told fascinating tales of human bravado and achievement.

An unpre-possessing cover sent from New York to London revealed a remarkable tale of the historic first round-trip crossing of the Atlantic by air.

The British-built dirigible R34 was the first aircraft to ever attempt an east-to-west crossing of the ocean, leaving Britain on July 2, 1919, and arriving in Mineola, N.Y., after 108 hours — about four days later.

(The first-ever trans-Atlantic flight, by British aviators Alcock and Brown, had taken place just a couple of weeks before, in the easier west-to-east direction.)

Two stowaways were among those aboard the R34: a crew member who had defied orders to disembark to save weight, and his kitten.

Because no one on the ground in New York knew how to tackle the landing of a large dirigible (the United States had yet to acquire its first), one of the British crew had to parachute to the ground to guide the operation, in the process becoming the first person to reach America by air from Europe.

The R34 refueled, picked up some mail, and set off on its return to England on July 10, completing the trip with the aid of prevailing winds in just 75 hours.

The cover in the Cherrystone sale, bearing a Marconi Wireless corner card and franked with a 2¢ coil stamp of the Washington-Franklin series, flew on the return leg of this remarkable flight. A July 13 “London R34” receiving cancel confirms its arrival. A scarce relic of a pioneering airship flight, the cover sold for $4,025.