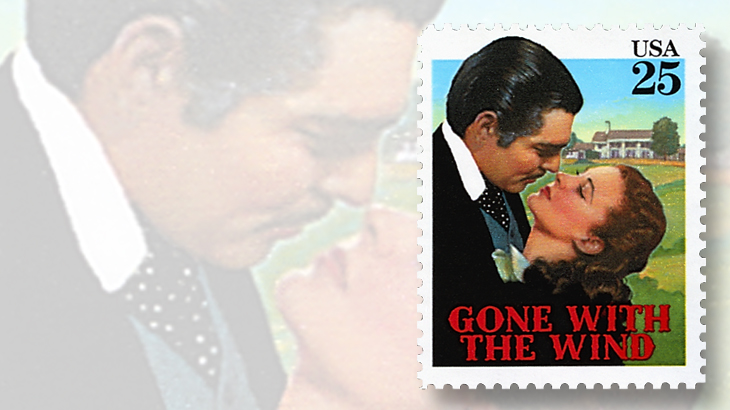 Clark Gable is featured with Vivien Leigh on this 1990 stamp commemorating the film Gone with the Wind.

Clark Gable, one of the most famous film stars of the 20th century, was born in the earliest weeks of that century, on Feb. 1, 1901, in Cadiz, Ohio. He took an interest in acting during his teens, and performed in theater groups and landed bit parts in films.

His earliest film appearance was in 1923, but he gained greater attention with his role alongside Western star William Boyd in Painted Desert, released in 1931. He became a star when he was paired with Jean Harlow in Red Dust in 1932, followed by their successful reunion the following year in the hit Hold Your Man.

In 1934, Gable starred with Claudette Colbert in the comedy It Happened One Night, earning him an Academy Award for Best Actor.

Gable is probably most identified with his role as Rhett Butler in Gone with the Wind, and it is in that role that he is featured on a 25¢ stamp (Scott 2446) that was issued March 23, 1990. He is shown in an embrace with actress Vivien Leigh (as Scarlett O’Hara), in front of the distant plantation, Tara. The stamp is part of a set of four Classic Films stamps.

Gable’s career continued until his death at age 59 following a heart attack in 1960.