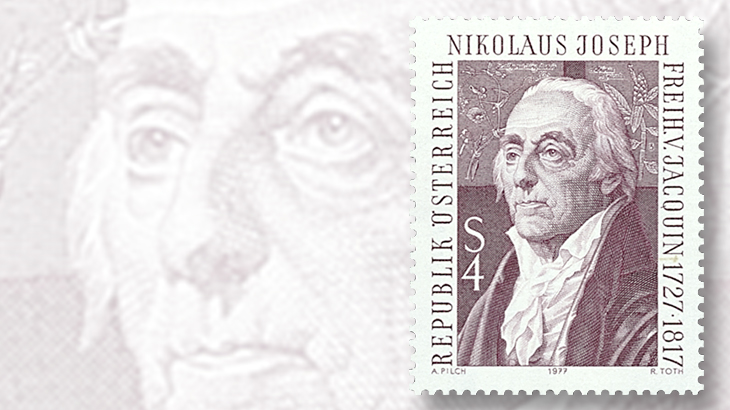 Nikolaus Joseph von Jacquin, a prominent European scientist and botanical researcher, was born Feb. 16, 1727, in Leiden, the Netherlands. He studied science at the University of Leiden, and also in Rouen, Paris and Vienna.

He spent several years traveling throughout the West Indies and collected various plants, seeds, and living birds and animals that he recorded in extensive illustrated reports and sent on to Europe in several large shipments. Some of the exotic plants were later added to the collection of the Schoenbrunn gardens in Vienna.

Encouraged by the eminent botanist Carl Linnaeus, Jacquin published his detailed findings as the illustrated Selectarum Stirpium Americanarum Historia in 1763.

A later work, Hortus botanicus vindobonensis (1770), carefully described and illustrated the flora at Vienna’s University Botanical Garden, where Jacquin was engaged as director, and was followed by several other important volumes.

Jacquin and his children were close friends with the composer Wolfgang Amadeus Mozart, who dedicated some of his compositions to the Jacquin family, and taught piano to Jacquin’s daughter Franziska.

In honor of Jacquin’s dedicated service to science on behalf of his adopted country, Austria issued a 4-schilling stamp honoring him on Feb. 16, 1977 (Scott 1051).