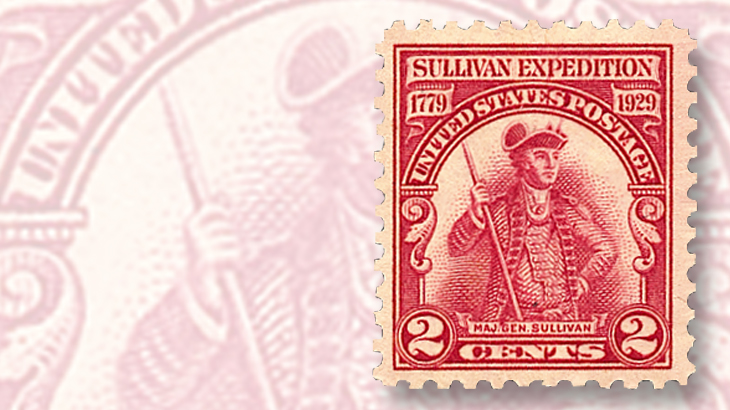 Maj. Gen. John Sullivan is shown on the 1929 2¢ stamp commemorating the 1779 Sullivan Expedition.

Maj. Gen. John Sullivan was an American military leader during the Revolutionary War, known for his 1779 defeat of the Indian confederacy that had allied with loyalist forces and attacked colonists’ frontier settlements in New York.

Sullivan was born Feb. 17, 1740, in Somersworth, N.H. He studied law and was elected to the New Hampshire provincial congress in 1774, representing the state at the first Continental Congress.

As a brigadier general in the Continental Army, Sullivan was sent to command the American forces at Quebec. Promoted to major general in 1776, he commanded troops at Long Island and during battles at Trenton, Princeton, and Brandywine in Pennsylvania.

The Sullivan Expedition was organized by Gen. George Washington and led by Sullivan and Brig. Gen. James Clinton, with more than 4,400 army troops. On May 31, 1779, Washington wrote to Sullivan, directing that the goal of the expedition against “the hostile tribes” was “the total destruction and devastation of their settlements.”

Sullivan’s health declined during the campaign, and he retired from the military soon after. He was a delegate to the Continental Congress of 1780-81, and also served as governor of New Hampshire, and as a U.S. district judge.

Sullivan was just 54 years old when he died on Jan. 23, 1795. A 2¢ carmine rose stamp commemorating the 150th anniversary of the Sullivan Expedition was issued June 17, 1929, featuring a portrait of Sullivan in the vignette (Scott 657).