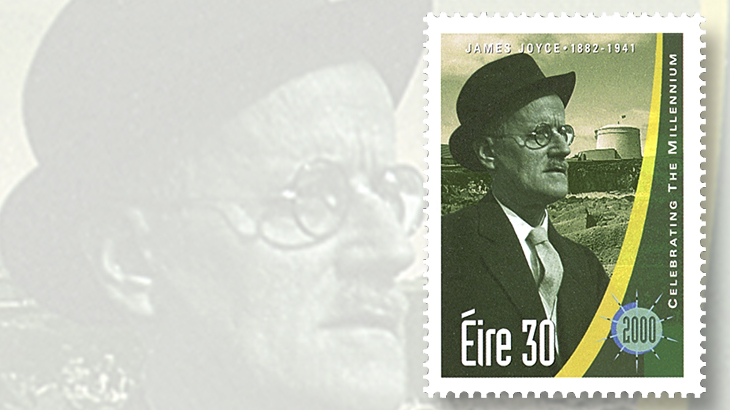 A 30-penny stamp honoring author James Joyce was issued in 2000 by his native Ireland.

Celebrated Irish author James Joyce was born Feb. 2, 1882, in Rathgar, a Dublin suburb. He studied languages at University College Dublin, graduating in 1902. He began work on the early stories that would become the collection Dubliners, as well as a novel titled Stephen Hero that was later reworked and finally published in book form in 1916 as A Portrait of the Artist as a Young Man.

In 1904, he met Nora Barnacle, and the two would leave Ireland together later that year to live on the European continent. They remained together, marrying in 1931, 10 years before Joyce’s death at age 59 in 1941.

During his lifetime, Joyce published two collections of poetry, and a play, Exiles, that explored the themes of doubt and jealousy.

It was his 1922 novel Ulysses that established Joyce as a major modernist writer. The tale of young Stephen Dedalus and the older Leopold Bloom as they each wander through Dublin on June 16, 1904, is linked in ways to Homer’s Odyssey, but retold as an often enigmatic stream-of-consciousness narrative. June 16 is annually celebrated today as Bloomsday by Joyce enthusiasts worldwide.

The book overcame initial accusations of obscenity to be ranked in recent years as No. 1 on many lists of the greatest novels of the 20th century.

With his final novel, Finnegans Wake, published in 1939, Joyce would extend the narrative experimentation of the episodic Ulysses into an extraordinary family saga rendered as a cryptic dreamscape densely populated with free-form language puzzles. Many readers find the effort of reading Finnegans Wake rewarding, while others have abandoned the lengthy work as incomprehensible.

James Joyce has been honored on multiple stamps from his native Ireland, including a single 30-penny stamp issued on Bloomsday, June 16, 2000, as part of the Millennium series (Scott 1220c).