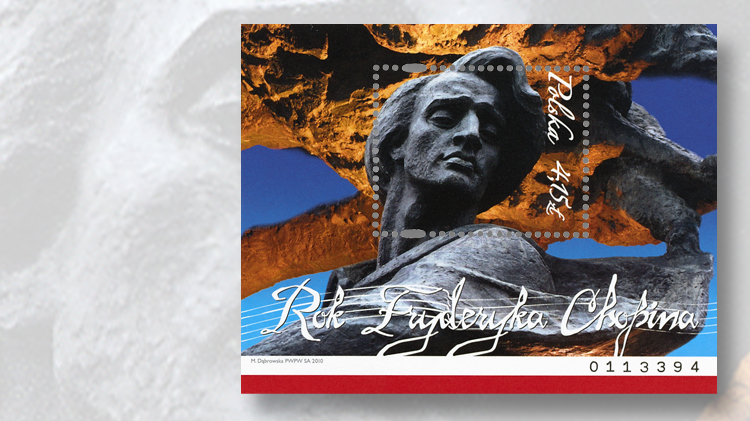 Poland issued a single-stamp souvenir sheet in 2010 to mark the birth bicentennial of composer Frederic Chopin.

The too-short life of Polish-born composer and pianist Frederic Chopin began Feb. 22, 1810, according to baptismal records, but Chopin’s family chose to celebrate it on March 1, and his birth is now often observed on that date.

He was born in the village of Zelazowa Tola, roughly 30 miles west of Warsaw, where the family moved shortly after Frederic’s birth. He was taught piano and organ as a youngster and entered the Warsaw Conservatory at age 16, where he studied music theory and composition. Though Chopin performed publicly infrequently (and often to small groups), admiration for his work grew with the public and among other notable composers and musicians.

After moving to Paris, Chopin became friends with Franz Liszt, and a companion to the author Aurore Dupin, the woman who famously wrote using the nom de plume George Sand. Chopin’s already delicate health declined in his 30s; he was treated for tuberculosis, though there has been recent speculation that he might have been stricken with cystic fibrosis. He died at age 39 on Oct. 17, 1849, and his own funeral march from the B-flat minor Sonata was played at his graveside.

Like many of the world’s most famous composers of classical music, Chopin has appeared on many stamps from countries all over the world.