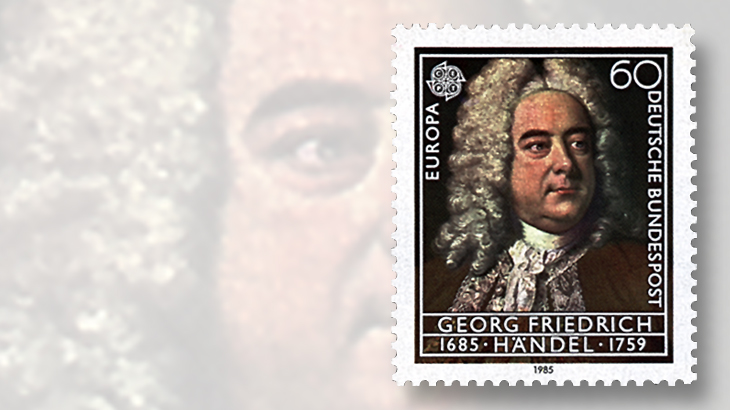 German-born composer George Frideric Handel was honored on a 60-pfennig German stamp in 1985.

The famous Baroque-era composer George Frideric Handel was born in Halle-an-der-Saale, Saxony (now part of Germany) on Feb. 23, 1685. He studied keyboard performance and composition, and later worked as the organist for the Halle cathedral before moving to Hamburg, where he completed his first opera, Almira, in 1705.

Further travels took him to Italy, where his reputation grew with the successful presentation of his opera Rodrigo in 1707. He was named musical director of the court at Hanover, but left for England soon after, where another triumphant opera, Rinaldo, brought even greater acclaim.

Handel eventually became a British subject, with citizenship conferred by an Act of Parliament in 1727 and royal assent from King George I. Handel had composed his Water Music suites in 1717 in response to a request from the king, and his later Music for the Royal Fireworks in 1749 was created at the request of King George II. Both British monarchs, father and son, were originally from Hanover.

Handel died April 14, 1759, and is buried at Westminster Abbey. He was widely admired throughout Great Britain and Europe during his lifetime, and that admiration today continues with his reputation as one of history’s greatest composers.

He has been honored on stamps from around the world, including his native Germany and his adopted homeland. Germany marked the 300th anniversary of Handel's birth with a 60-pfennig stamp issued May 7, 1985 (Scott 1440), and Great Britain paid tribute one week later with a 17-penny stamp featuring an artistic interpretation of Handel’s famous Water Music (1103).