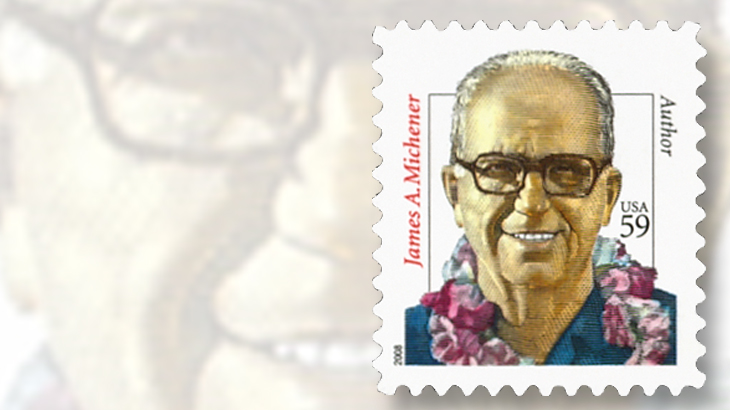 Pulitzer Prize-winning author James A. Michener was born Feb. 3, 1907, in Doylestown, Pa., north of Philadelphia. He studied at Swarthmore College and taught high school and college classes for several years before serving in the United States Navy during World War II.

He began writing during the war, and completed Tales of the South Pacific, winning the Pulitzer Prize for fiction in 1948. Michener’s story was later adapted for the Rodgers and Hammerstein stage musical South Pacific, and the 1958 film by the same name.

“Following the success of Tales of the South Pacific, Michener traveled the world to research more than 80 nonfiction articles and book reviews for Reader’s Digest, Life magazine, Saturday Evening Post, the New York Times, and many other newspapers and magazines,” the U.S. Postal Service noted in its philatelic release No. 08-058.

Michener was awarded the Presidential Medal of Freedom by Gerald R. Ford in 1977, and served as a member of the USPS Citizens’ Stamp Advisory Committee from 1979 to 1986. He died of kidney failure at age 90, in 1997.