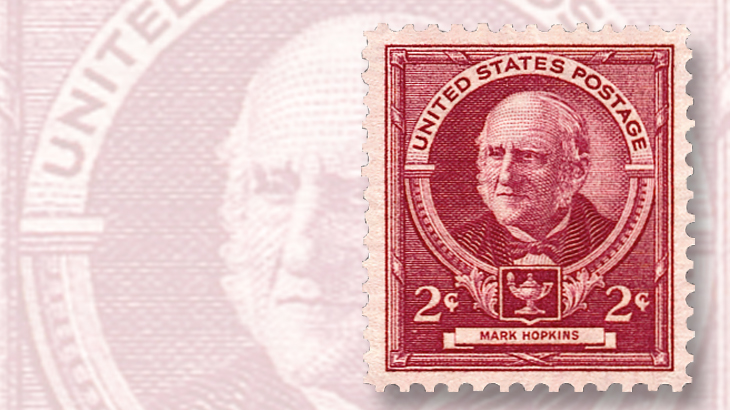 Mark Hopkins, a college president, writer, and lecturer on Christianity, was honored on a 2¢ stamp in 1940.

Mark Hopkins, an American educator, author, Christian lecturer, and instructor of moral philosophy, was honored on a 2¢ rose-carmine stamp in the American Educators set of the Famous Americans issue of 1940 (Scott 870).

Hopkins was born in Stockbridge, Mass., on Feb. 4, 1802, the son of a farmer, Archibald Hopkins, and his wife, Mary Curtis.

Hopkins attended Williams College in Williamstown, Mass., graduating in 1824, and continued his education at Berkshire Medical College in Pittsfield, Mass., earning a medical degree in 1829.

Initially preparing to practice medicine in New York City, he chose instead to accept a teaching position at Williams in 1830, as professor of moral philosophy and rhetoric. Shortly thereafter, he began publishing his religious and philosophical writings, including A Review for the Argument from Nature for the Divine Existence in 1833.

Hopkins was chosen as the new president of Williams in 1836, while also continuing to teach and lecture. President James A. Garfield, who graduated from Williams in 1852, was one of his students, and warmly praised Hopkins as an educator.

Hopkins’ 1844 lecture series Evidences of Christianity was published in book form in 1846, and he continued to teach, lecture, and publish articles for many years.