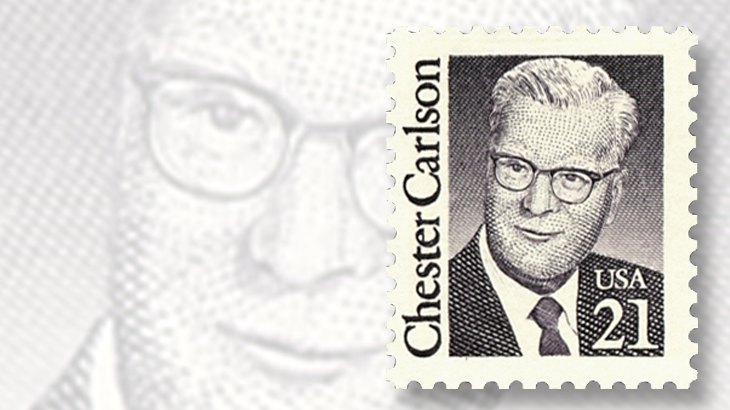 Chester Carlson, the inventor of xerography, was honored on a 21¢ definitive stamp in 1988.

Chester Carlson, the inventor who developed the technology that led to office copiers, was honored on a 21¢ stamp issued Oct. 21, 1988 (Scott 2180). The stamp is a Great Americans series definitive then paying the rate for postcards mailed to Canada.

Chester Floyd Carlson was born in Seattle, Wash., on Feb. 8, 1906. He earned a degree from the California Institute of Technology in 1930, and worked for P.R. Mallory and Co., a manufacturer of batteries and electronics.

Looking for a way to conveniently reproduce patent specifications, Carlson experimented with photoconductivity rather than photography, and in 1938 invented the technology that would be called “xerography,” from the Greek for “dry printing.”

“Although Carlson is hardly a household name,” the Postal Service wrote in its Philatelic Release No. 68 in 1988, “the process he invented in 1938 is today embodied in an indispensable business tool used by millions of people around the world. But, though his invention has become one of the most profitable products of all time, to those who knew him, Carlson is remembered more for his determination, his kindness and his extraordinary generosity.”

Carlson’s invention brought him great wealth, and he donated $100 million to charity before his death in 1968.