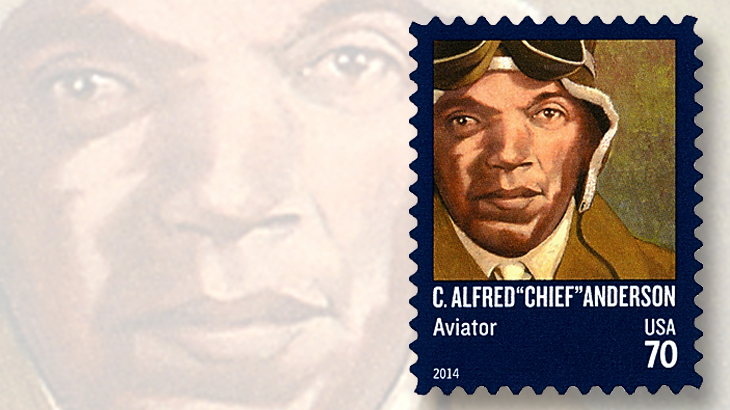 C. Alfred "Chief" Anderson, an instructor for the famed Tuskegee Airmen, on a 70¢ stamp from 2014.

Nurturing a dream of becoming an airplane pilot in the 1920s, Anderson was denied flying lessons because of his race. He trained as an airplane mechanic and began learning the basics of flight through his work. He bought an airplane with money he’d saved, along with loans from family, and taught himself to fly, earning his pilot’s license in 1929.

Anderson became an air transport pilot and, eventually, a flight instructor. He looked for opportunities to expand the ranks of black pilots, and developed a pilot training program at Tuskegee Institute in Alabama.

“During World War II, Anderson served as chief flight instructor of a primary flying school that Tuskegee operated under a contract with the War Department,” the United States Postal Service explained in text printed on the back of the 2014 stamp pane honoring Anderson.

“The cadets who passed this first phase of training under the ‘Chief,’ as they called him, would become part of the 99th Pursuit Squadron — the U.S. military’s first all-black aviation unit. Members of the 99th, along with member of several other flying units who began their training under Anderson, are today commonly known as the Tuskegee Airmen.”

In 1941, first lady Eleanor Roosevelt asked for a flight with Anderson, and the two flew together in Anderson’s plane for some 40 minutes, against the wishes of Mrs. Roosevelt’s security detail.