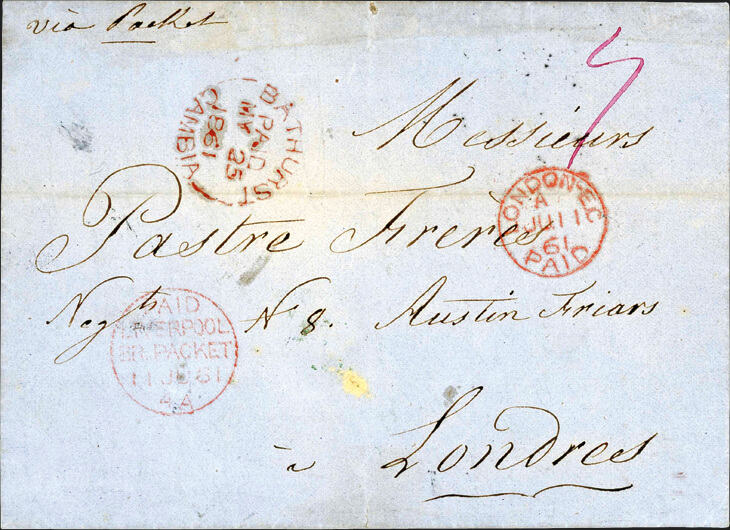 A folded letter bearing possibly the earliest recorded Gambia postal marking — a red “Bathurst/Gambia” circular stamp dated May 25, 1861 — from the Eli Leibowitz collection, sold for $2,850 at the Cavendish auction. The cover bears Liverpool transit and 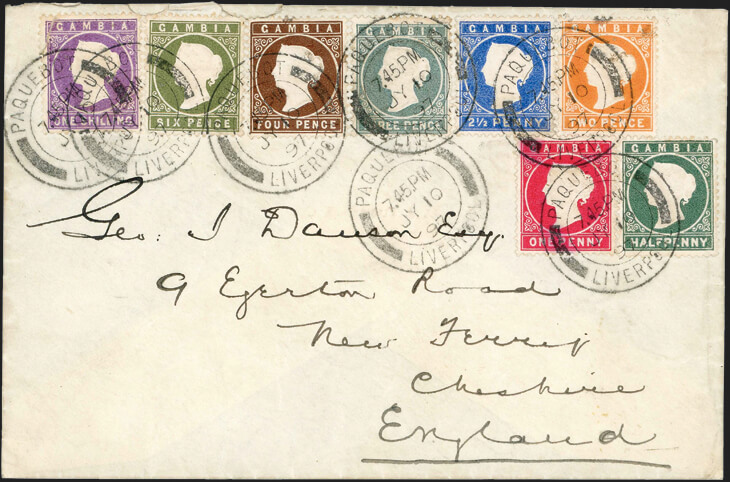 A cover franked with the entire Cameo series of mid-1890s Gambia brought $390 in the December Cavendish auction of the Eli Leibowitz collection of Gambia. 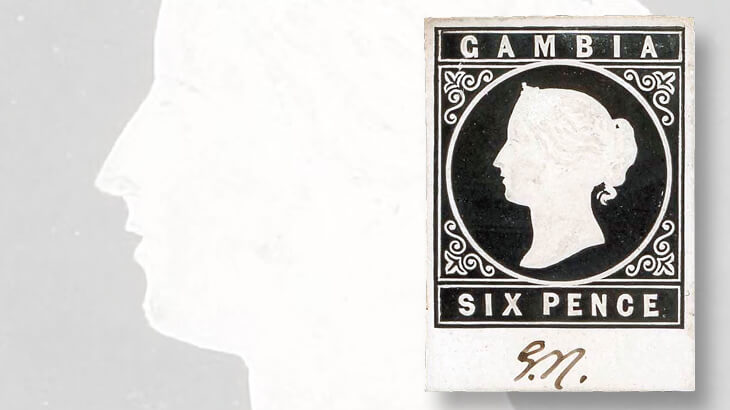 From the Eli Leibowitz collection, a black-and-white embossed die proof of the 6d Cameo design of Gambia realized $4,500, triple its estimate, in last December’s Cavendish auction. 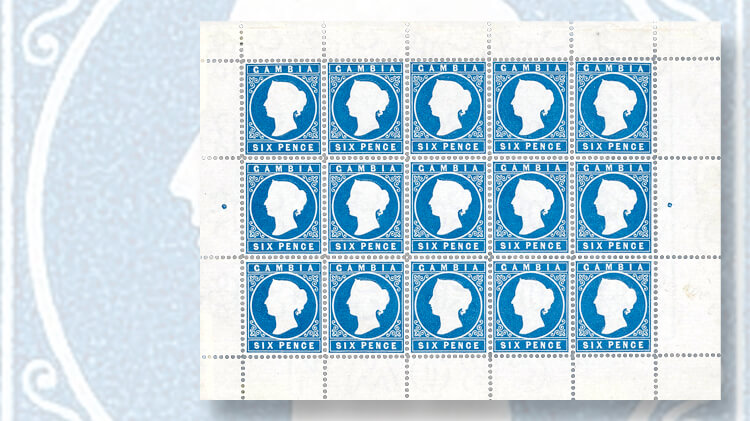 A possibly unique full sheet of 15 of the first printing of the 1880 6-penny Cameo design of Gambia sold for about $9,800 — more than three times its estimate — in the Cavendish sale of the Eli Leibowitz collection last December in London, England.
Previous
Next

Eli S. Leibowitz recalls how, not long after he returned to stamp collecting as an adult, a dealer in his hometown of Durban, South Africa, offered him an album containing a modest collection of Gambia’s unusual Cameo issues.

“Fascinated, I purchased the album, and this set me on the road to expanding the collection to include all items associated with the development” of the West African colony’s stamps, wrote Leibowitz in the introduction to the Cavendish Auctions catalog for the Dec. 14, 2016, sale of his Gambia collection in London.

Leibowitz, who retired to Australia in 1993, said his exhibit of Gambia went on to win an international gold medal, among other awards. He was later named a fellow of the Royal Philatelic Society London.

Gambia had first been settled by British traders in the early 1600s, and was recognized as a colony in the early 19th century. A British-run postal service began there in 1858.

The distinctive Cameo design was produced by the firm of Thomas De La Rue in London exclusively for the tiny settlement on the banks of the Gambia River. It consists of a colorless, embossed profile of Queen Victoria, surrounded by a simple frame in one of several colors. First appearing in 1869, the Cameo would be the colony’s only stamp design for almost 30 years.

Despite its striking beauty, however, the Cameo design was never adopted for any other colony. The explanation for that is fairly prosaic, according to Gary Loew, an American expert on Gambia philately. A philatelic researcher and author of the forthcoming book Mastering Postal History, Loew also was a buyer in the Cavendish sale.

According to Loew, the genesis of the Cameos came down to money.

“The design resulted from that colony’s impoverished finances,” Loew explained. De La Rue adapted the design from the stamps of Heligoland, a British outcropping in the North Sea, and billed the Gambian colonists £75 for small plates of 15 subjects each.

Initially, the Cameo series comprised just two stamps, 4 pence and 6d; it expanded in 1880 to include five more denominations, from ½d to 1 shilling. A 2½d was added in 1886, at the same time the colors of the other values were changed to bring them in line with Universal Postal Union (UPU) norms.

Cavendish’s sale of the Leibowitz collection presented page after page of mint and used singles and multiples showing shades and rare postmarks, postal history, and other collateral items.

The top lot was a full sheet of 15 of the first printing of the 1880 6d stamp (Scott 10), in a beautiful shade of blue. The top-right stamp shows a sought-after variety in which the top panel of the design slopes downward (10a).

Believed to be a unique surviving sheet of this stamp, it fetched more than three times its presale estimate to bring £7,800, or about $9,800, including the 20 percent buyer’s premium Cavendish adds to all lots.

A black-and-white embossed die proof of the 6d stamp shows off the Cameo in its starkest form. The proof represents plate 2, made for the slate green version of the 6d denomination issued in 1893 (Scott 18).

Emanating from De La Rue’s archives, this kind of collateral item is important in building any world-class exhibit of a stamp issue, because it helps tell the story of how a stamp came to be produced.

Initialed “G.N.” in the bottom margin, presumably an official’s mark of approval, the proof realized $4,500 — also triple its estimate.

A beautiful, if philatelically inspired, cover showing the entire Cameo series (Scott 12-19) in its final iteration from the mid-1890s was posted on board a ship steaming for England. The stamps, a rainbow display of all eight denominations, are canceled with a “Paquebot/Liverpool” datestamp. The cover sold for $390.

Reaching back to the prestamp period, the sale included a cover bearing what is thought to be the earliest recorded Gambia postal marking. A folded letter, written in French and endorsed “via Packet,” bears a crisp red “Bathurst/Gambia” circular datestamp with “Paid” and the date of May 25, 1861, in the middle.

A Liverpool transit mark and a London receiving mark, both of July 11 that year, show the completed journey, while a red manuscript “5” indicates that 5d of the likely 6d prepaid in Gambia would have been credited to Britain. The cover sold for $2,850.

The country became independent in 1965, and today is known as The Gambia. It winds along the banks of its namesake river for some 200 miles, yet it is only about 30 miles wide, making it the smallest nation in Africa at just 4,360 square miles.

In the 1980s, The Gambia briefly experimented with confederation with its francophone neighbor, Senegal, which surrounds it. On Jan. 29 of this year, after some political upheaval, the nation changed its official name back from “Islamic Republic of The Gambia” to simply “Republic of The Gambia.”