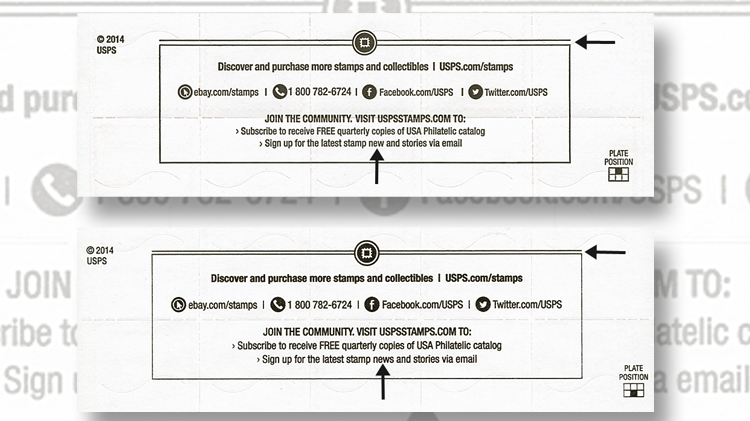 The arrows on these cropped photos of the back of a counterfeit 2015 Love pane, top, and a genuine pane, bottom, point out two key differences between the bogus and real panes. One arrow reveals a typographical error on the counterfeit pane: the word “new 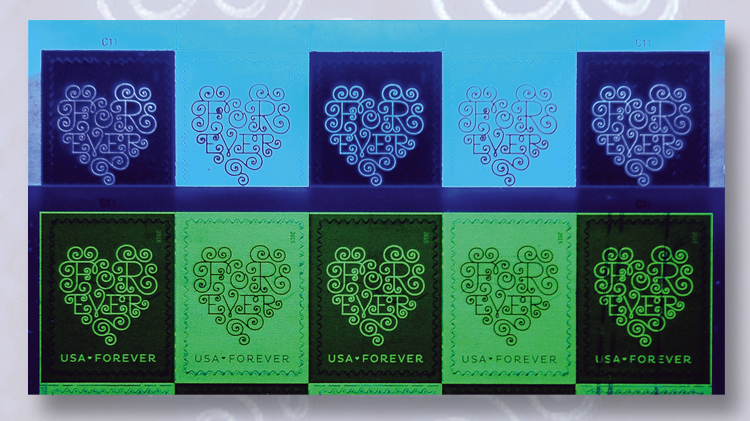 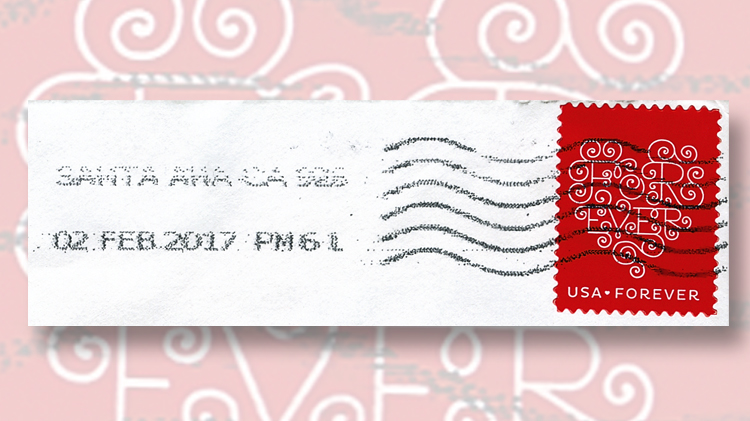 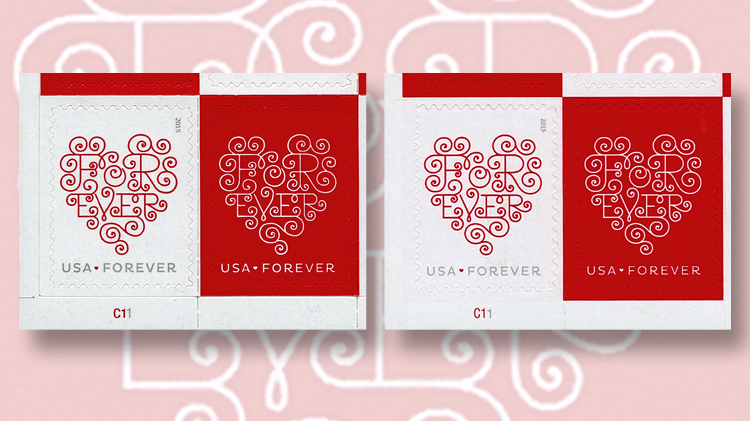 Counterfeit United States Love stamps have recently surfaced on eBay. Shown here, cropped, are the bottom-left corner of a counterfeit 2015 Love pane of 20, left, and a genuine pane, right. 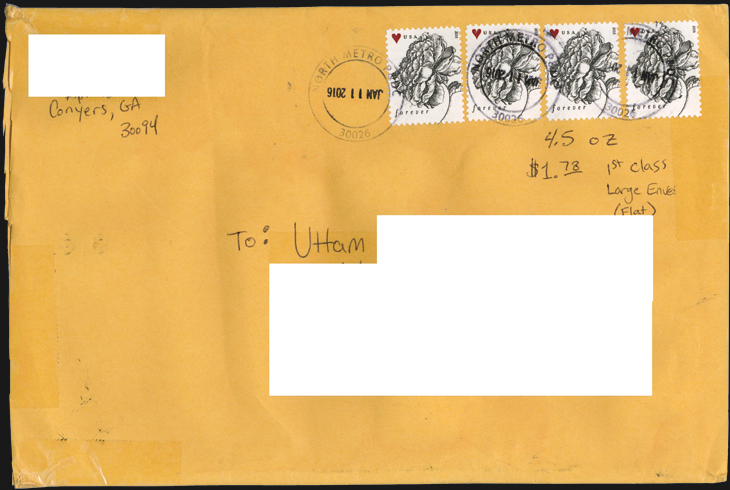 Several panes of counterfeit United States 2015 Love stamps were sent to a buyer in New York in this envelope, which is franked with four counterfeit 2015 Rose and Heart stamps [Scott 4959(CF1)].
Previous
Next

Highly convincing counterfeits of the 2015 United States Love stamps are being sold on eBay.

Linn’s first learned of the bogus 2015 Love stamps’ existence Jan. 30, via a post on the Stamp Collecting Forum website.

The poster, using the moniker “usingha,” provided cropped pictures of genuine and counterfeit Love panes, as well as images of the counterfeit 2015 Rose and Heart stamp [Scott 4959(CF1)] that was listed for the first time in the 2017 Scott U.S. Specialized catalog.

Linn’s contacted the poster through Stamp Collecting Forum to learn more about the origins of these heretofore unreported counterfeit stamps.

“Yes! I would like to show you the [counterfeit Love pane],” replied Uttam Singha of New York.

Singha told Linn’s that he purchased a total of 16 counterfeit panes (four 2015 Love and 12 2015 Rose and Heart) from a seller on eBay whose user name is “essoclubtiger.”

Operating out of Conyers, Ga., essoclubtiger was selling four-pane lots (80 stamps total) of the counterfeit Love and Rose and Heart stamps at “buy it now” prices of $35.41 and $34.79, respectively.

The seller ended both auctions Jan. 14.

“The person who sent the counterfeit stamps to me used counterfeit Rose and Heart stamps on the envelope,” said Singha.

Shown here is a photo of the mailing envelope that Singha altered to obscure his mailing address and the seller’s name and return address.

Four counterfeit Rose and Heart stamps were used to pay the postage. Docketing just below the stamps states that the parcel weighed 4.5 ounces and required $1.78 postage.

The bogus quartet, masquerading as real 47¢ stamps at the time of mailing, totaled $1.88, for a convenience overpayment of 10¢.

According to Singha, the “2016” year date in the postmarks is incorrect; evidently the North Metro, Ga., processing and distribution center, which applied the cancels, failed to swap out the previous year for the correct “2017.”

An oversight such as this, particularly at the turn of a new year, is not an uncommon occurrence at postal facilities that normally do not hand cancel large quantities of mail.

As of Feb. 7, Linn’s had identified two other eBay sellers who were offering counterfeit U.S. Love stamps: “daveproductions” in Westfield, N.J., and “finch86987” in Flushing, N.Y. Both were selling individual lots of 25 panes of 20 (500 stamps total).

Illustrated on the front page are cropped photos of the bottom-left corner of Singha’s counterfeit pane, top, and a genuine pane, bottom. Both images show the two Love stamp designs in red and gray, and red.

There are a number of readily identifiable differences between the real stamps and their bogus counterparts.

The accompanying cropped picture of a genuine pane atop a counterfeit pane, taken under shortwave UV light, shows the difference between the nontagged counterfeit stamps, and the tagged genuine stamps.

3. Genuine stamps of both designs have a clear “2015” year date at top right; the “2015” on the counterfeit red stamp is barely visible, even under magnification.

4. Genuine panes show only serpentine die cutting around the stamps; counterfeit panes have a straight-line die cut around the perimeter of the pane and rouletting between each column and row of stamps.

6. The letters of “USA FOREVER” on genuine stamps are thin; the letters are thick on counterfeit stamps.

After he received the bogus panes, Singha said, that he noticed the perimeter die cutting first.

When looking at the back of genuine and counterfeit panes, two differences are noticeable:

2. In the last line of text in the ruled box, the word “news” on genuine panes is misspelled “new” on counterfeit panes. This same typographical error also is found on the back of counterfeit 2015 Rose and Heart panes.

These distinguishing characteristics are highlighted with arrows in the cropped photos of the line and box on the back of a counterfeit pane, top, and a genuine pane, bottom.

The 2015 Love counterfeits won’t fool collectors who know what to look for. Nonetheless, they are dangerous because they mimic the real stamps very well.

Like their genuine counterparts, they were printed using offset lithography, an indirect printing method easily susceptible to counterfeiting because the technology is readily available and affordable.

In 2004, Linn’s was first to report the discovery of counterfeit 2002 37¢ Flag stamps, which is now listed as Scott 3635(CF1). At that time, the U.S. Postal Inspection Service was engaged in an ongoing investigation to determine the source of the counterfeit stamps.

Thirteen years later, a total of 40 additional counterfeit stamps (including the bogus 2015 Rose and Heart) have been listed in the Scott U.S. Specialized catalog.

Postal counterfeits of U.S. stamps were listed for the first time in the 2013 edition of the U.S. Specialized catalog, published in October 2012.

Today’s web of stamp counterfeiting has spread far and wide, making it even more difficult for postal inspectors to pinpoint the producers and sellers and shut them down.

But the sellers continue to cover their tracks in ways that are predictable.

According to Larry Plante, a revenue fraud analyst for the Cincinnati office of the Postal Inspection Service, today’s stamp counterfeiters use two methods to get their bogus wares into the United States via online sites such as eBay.

“The first is hacking an inactive account,” said Plante. The hacker presumably changes the contact information and then uses the account to sell the stamps to unsuspecting buyers.

In the second scenario, a so-called middleman is used. Plante explains:

“A middleman is someone who will list the stamps for sale using their own eBay account for a third party.

“The middleman is located within the U.S., while the third party is in China. The middleman can get a commission or flat fee for their services. I don’t know how the money is exchanged.”

Plante also said that fraudulent sellers, once they’ve completed a sale, will email the buyer and “offer more stamps at discounted prices outside of eBay.”

While this is serious business for Plante and his colleagues, their efforts occasionally yield humorous results.

For example, Plante described one buyer who “emailed the seller through eBay asking for reassurance that these stamps were not fake. The seller replied:

“‘Our company is [name redacted], located in CA, USA. We signed a contract with USPS. We ship from China because of the tax issues, so we ship all the stamps to China first and ship to you. You can check all the stamps at local post office. If you find any fake or fraud, [please] tell us and we will refund you immediately without return. Thanks!’”

Despite the often murky origins of counterfeit stamps, some collectors avidly seek them, including postally used examples on cover.

Shown nearby, cropped, is a cover franked with a bogus 2015 red Love stamp. A reasonably clear sprayed-on wavy-line postmark indicates the stamp was canceled Feb. 2 in Santa Ana, Calif.