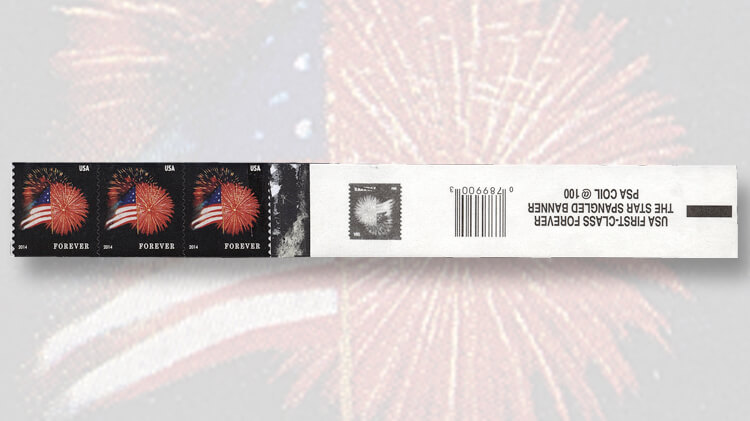 This strip of three counterfeit Flag and Fireworks coil stamp is still attached to the leader strip that was wound around the original roll of 100 stamps to keep it secure. 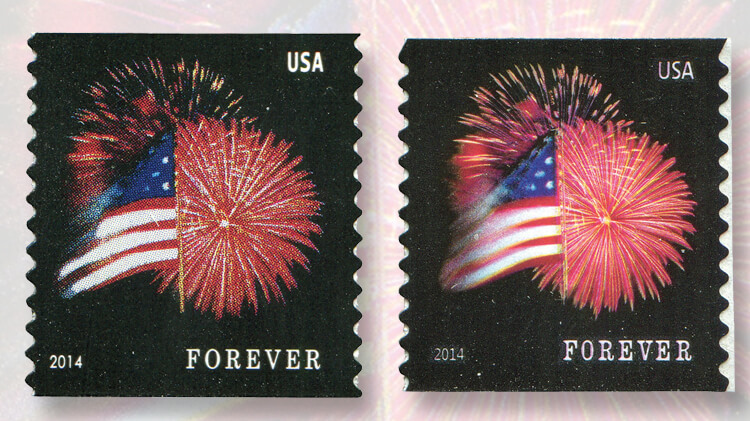 Linn’s has identified at least seven characteristics that can be used to identify a counterfeit 2014 Flag and Fireworks coil stamp, left. A genuine example of the stamp, Scott 4868, is shown at right.
Previous
Next

On March 3, 2014, the United States Postal Service issued a coil stamp depicting the Fort McHenry flag and a pair of bursting fireworks in the background.

Robert Thompson, a specialist in U.S. plate-number coils and president of the Plate Number Coil Collectors Club, told Linn’s in mid-February that he found an intact roll of 100 counterfeit Flag and Fireworks coil stamps in late July 2016.

To Linn’s knowledge, this is the earliest reported discovery of this modern U.S. counterfeit.

Illustrated nearby are enlarged images of a counterfeit Flag and Fireworks coil, left, and a genuine example, right.

Like their genuine counterparts, the bogus stamps were printed using offset lithography, an indirect printing method easily susceptible to counterfeiting because the technology is readily available and affordable.

At first glance, the bogus Flag and Fireworks coil looks almost identical to its genuine counterpart.

For example, the shape of the serpentine die cuts of the counterfeit closely mimics those of the real stamp. The die-cut peaks are a bit shorter on the bogus stamp.

Closer scrutiny, however, reveals key characteristics that allow the observant collector to distinguish the fake from the real.

1. Counterfeit is printed on paper without tagging that exhibits a bluish glow (seen most easily in the white flag stripes and the “USA” and “FOREVER” inscriptions) under shortwave ultraviolet light. Genuine is printed on tagged paper that shows the signature yellow-green glow under shortwave UV light.

2. Counterfeit shows indistinct microprinted “USPS” in fireworks above the flagpole. “USPS” is clear on genuine.

4. Stripes of flag on counterfeit not of uniform thickness. Genuine has stripes of even thickness.

5. Inscriptions on counterfeit have thick letters or numbers. Genuine stamps have thin lettering.

6. The “O” of “FOREVER” on counterfeit is wide. On genuine stamps the “O” is narrow.

7. Counterfeit shows large lithographed dot structure in the printing; most noticeable in the flag stripes and the bursting firework in the foreground. Dot structure of genuine printing is much finer, yielding clear, crisp design elements.

Despite these identifying features, the counterfeit Flag and Fireworks coil is a dangerous knock-off because it can easily fool the noncollecting public, who use large quantities of definitive postage on their mail.

Rolls of the counterfeit Flag and Fireworks coil are convincing, as well. Pictured here is a strip of three bogus stamps with the intact leader strip still attached at right.

Some unsuspecting postal customers, trying to save some money, seek out quantities of current forever stamps offered at discounts below face value.

Such bargains are readily found on eBay and Amazon.com, where numerous sellers offer bulk lots of stamps. These outlets, as it turns out, are being used to sell large numbers of bogus stamps.

“There is a big market for current forever stamps,” stamp dealer Henry Gitner told Linn’s. “I and maybe two other dealers in the U.S. are at the forefront of this.”

Gitner, a longtime advertiser in Linn’s who operates Henry Gitner Philatelists in Middletown, N.Y., pays close attention to modern U.S. issues, and he can spot a counterfeit issue with laser precision.

“Whenever a new fake comes out, we figure it out pretty quickly,” he said.

According to Gitner, the easiest way to spot counterfeits is to look at the lithographed dot pattern using a magnifying glass.

“All the counterfeits I’ve seen are a screened printing of the original,” Gitner stated.

A dealer in U.S. and worldwide stamps, who provided the photos of the counterfeit and genuine Flag and Firework stamps shown with this story, told Linn’s that one of his customers bought a roll of fake stamps on eBay in late January.

“The stamps were provided to me by a friend who had purchased them for use but became suspicious so I would prefer not to ‘take credit’ for anything,” the dealer said. “I’m not sure of the eBay seller’s name, but I believe they bought them from a seller based in California.”

The dealer began tracking eBay sales of modern U.S. counterfeits last October, and he was surprised by what he found.

“I got heavily invested in researching the sellers of [counterfeits] on eBay and put together a large list of sellers to forward to the [U.S. Postal Inspection Service].

“I actually found over $500,000 in sales from suspicious sellers of these issues (almost all California-based) by using the ‘Sold Items’ search.

“My local inspector was interested in the matter, but after he referred it out to the California group for further action, it appears nothing ever came of it. Some of the same sellers I reported then were still active last I checked.”

Gitner echoed the dealer’s comments regarding the likely U.S. origins of recent counterfeits. “A lot of these fakes come out of California,” he said.

Linn’s ongoing investigation into the murky origins of these counterfeits suggests that the problem is large than initially thought.

However, the powers that be in the Postal Service and the Postal Inspection Service seemingly don’t have the time or inclination to dig more deeply. This, in turn, puts the onus on collectors and dealers to make the discoveries and get the word out.

The dealer Linn’s contacted lamented that more hasn’t been done, but he remains optimistic.

“I personally have moved on and given up on waiting for the USPS to do anything, but I do applaud Linn’s efforts to bring some change to the situation,” he stated. “I hope eventually something comes of this.”

Most postage stamps have security features