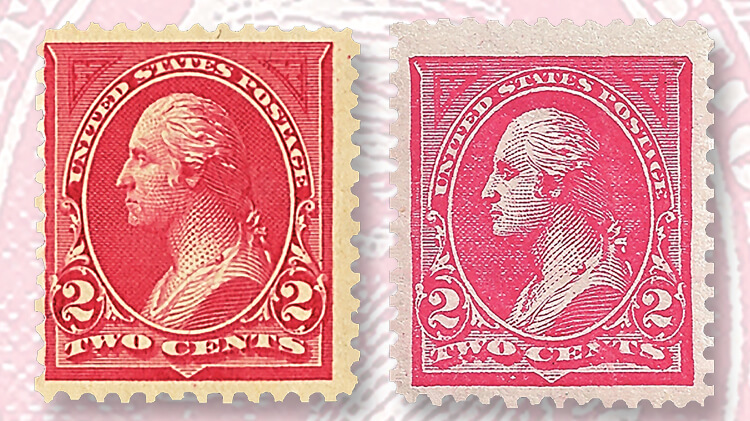 On Feb. 10, Linn’s managing editor Charles Snee reports on “highly convincing counterfeits” of United States stamps that are being sold on the Internet auction site eBay.

After learning about the counterfeit 2015 Love forever stamps’ existence through a post on the Stamp Collecting Forum website, Snee picked up the ball and ran with it.

Postal counterfeits are intended to defraud postal administrations — in these instances, specifically the U.S. Postal Service.

With the 2013 edition, the Scott editors began listing U.S. postal counterfeits in the Scott Specialized Catalogue of United States Stamps and Covers.

The listings were a long time coming, considering that the first known U.S. postal counterfeit stamp was an 1895 counterfeit of the 1894 2¢ George Washington light rose carmine stamp (Scott 250) from the first Bureau (Bureau of Engraving and Printing) issue.

The counterfeit 2¢ stamps were offered for sale in an ad in the Chicago Tribune in 1895.

The bogus issues were produced by a counterfeit ring in Chicago, led by Tinsa McMillian, and sold by the Canadian Novelty Supply Agency in Ontario, Canada. McMillian and several of her cohorts were arrested and sentenced to prison.

Many of the counterfeits that exist today were marked “C” by postal authorities.

In the March 18, 1992, issue of Linn’s, Wayne Youngblood reported that two types of this counterfeit exist: one with type I triangles in the corner, Scott 250(CF1), and the other with type III triangles, a counterfeit of United States Scott 267. The Scott editors have seen only one unused example of Scott 267(CF1), and it is without gum. This counterfeit is scarce both unused and used because many were seized by postal authorities.

For readers interested in learning more about counterfeit stamps, information can be found from several sources. The Scott U.S. Specialized catalog is a good place to start.

Joann Lenz, an avid collector of counterfeit stamps, provides information on U.S. counterfeits on her website.