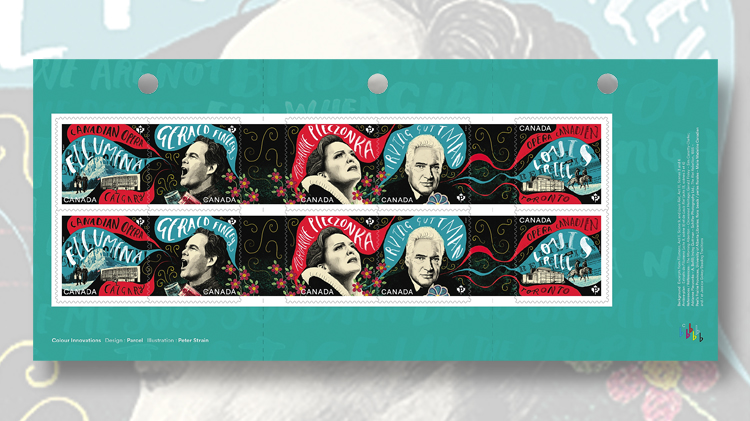 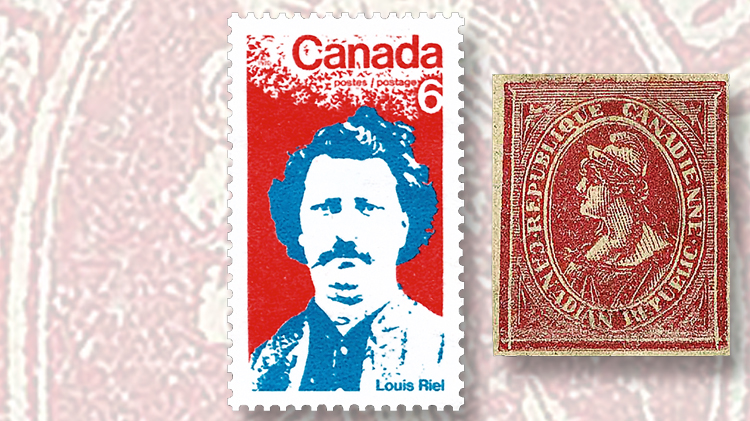 Louis Riel, the Metis leader who was the subject of a 1967 Canadian opera undergoing a revival this year, appeared on a 6¢ stamp in 1970 (left). Riel’s 1869-70 Red River Rebellion is generally believed to have been the source of this bilingual red “Canadi 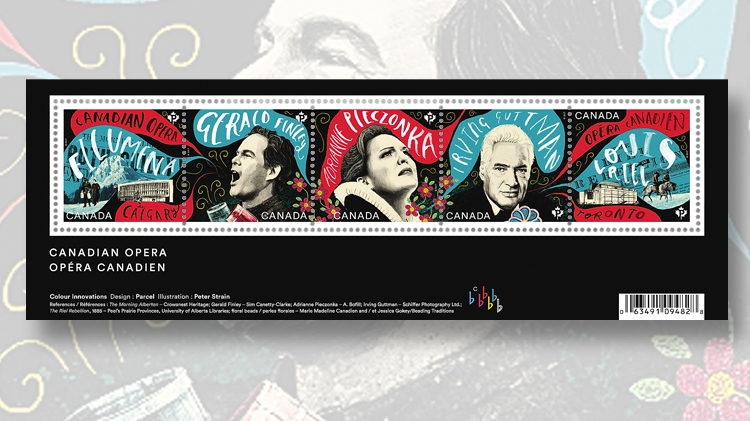 The five stamps in the Canadian Opera souvenir sheet feature the same designs as the booklet stamps, but they have moisture-activated gum and the sheet has a dark background that adds drama to the designs. 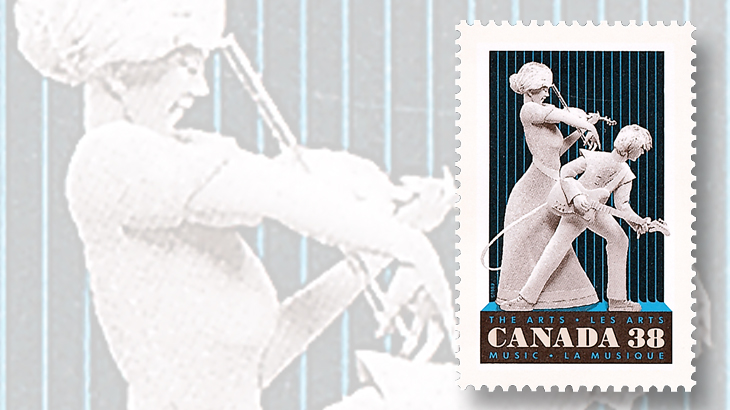 Canada issued a 38¢ Performing Arts stamp in 1989 to mark the 30th anniversary of the Vancouver Opera. 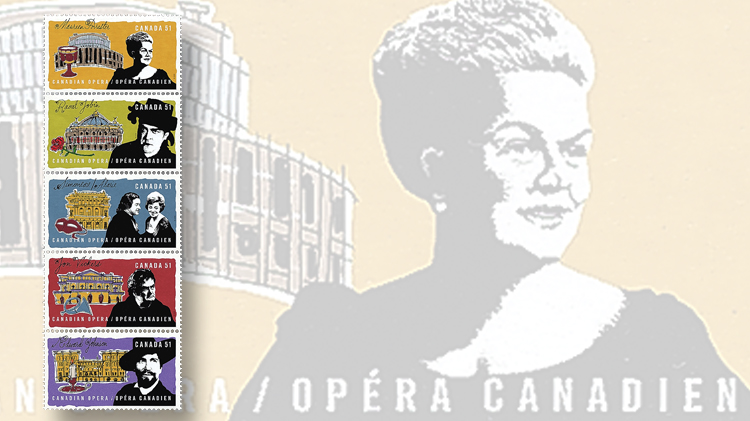 In its February-March Details magazine for collectors, Canada Post characterized the designs as “exuberant and unmistakably creative,” adding that the issue “most assuredly mirrors the art form it reflects.”

The horizontally configured booklet contains five vertical pairs of stamps, with a single five-stamp strip across the matching souvenir sheet. The booklet stamps are self-adhesive, while those in the souvenir sheet have moisture-activated gum.

A third stamp honors director Irving Guttman (1928-2014), known as the father of opera in western Canada for his role as co-founder of opera companies in Edmonton, Alberta; Regina, Saskatchewan; and Winnipeg, Manitoba.

The final two stamps commemorate the 1967 work Louis Riel, which romanticizes the life of the Metis leader hanged for treason in 1885; and the Canadian opera Filumena, the tale of an Italian immigrant who was the only woman to be hanged in Alberta. The latter opera premiered in 2003.

Although the earliest opera written in Canada dates from 1788, the birth date of modern Canadian opera is widely regarded as 1967, when Canada commissioned one to celebrate the country’s centennial.

The result was Louis Riel, composed by Harry Somers and based on a libretto by Mavor Moore with Jacques Languirand.

This year, to mark the work’s 50th anniversary, it is being revived by Toronto’s Canadian Opera Company from April 20 to May 13.

Filumena, composed by John Estacio with a libretto by John Murrell, is undergoing a revival as well. The Calgary Opera is staging it once again, with the first performance Feb. 4, the day the new stamps were issued.

The distinctive lettering and colors of the mural-like strips of stamps in the booklet and souvenir sheet are the work of creative director Gary Beelik and designer Kristine Do of Toronto’s Parcel Design, and illustrator Peter Strain. The trio has prior experience in book cover and poster design. These are their first stamps for Canada Post.

In Details magazine, Beelik reported that the dark, dramatic background played a large role in the overall design of the souvenir sheet, making the booklet, which didn’t have such a background, more of a challenge to design.

Beelik said: “I wanted to utilize all of the real estate, create one flowing element that would connect all the pieces, and depict continuity without sacrificing individuality.

“Against that powerful background, the collage illustrations, speech bubbles and clippings allowed us to do justice to what was a complex subject.”

These are not the first Canadian stamps that celebrate opera.

One of four 38¢ Performing Arts stamps issued in 1989 picture musicians to honor the 30th anniversary of the Vancouver Opera (Scott 1253).

Louis Riel was recalled with a 6¢ commemorative issued in 1970 (Scott 515), and the 1869-70 Red River Rebellion in which Riel was a leader is believed to have been the source of a defiant-looking Liberty Head essay inscribed “Canadian Republic” in English and French.

A year ago, two such essays in red were sold by Eastern Auctions for $1,100 and $770, as reported by Linn’s New York correspondent Matthew Healey in the March 21, 2016, monthly issue.

As with all Canadian stamps issued in 2017, the Canadian Opera booklet and souvenir sheet have been treated with special tagging to mark Canada’s sesquicentennial.

The words “Canada 150” will appear along the top of the stamps when they are viewed under an ultraviolet light.

This year is the 150th anniversary of the Dominion of Canada, unified under the British North America Act, which brought together the colonies of Upper Canada (Ontario), Lower Canada (Quebec), Nova Scotia, and New Brunswick in 1867.

The Canadian Opera stamps are available in self-adhesive die-cut booklets of 10. The stamps measure 32 millimeters by 32mm, although the stamp images are wider than they are tall, having tagged white margins at top and bottom, as well as two decorative spacers between stamps 2 and 3 and stamps 4 and 5 in each horizontal booklet strip.

These stamps and related items are available at the Canadian Post's website.