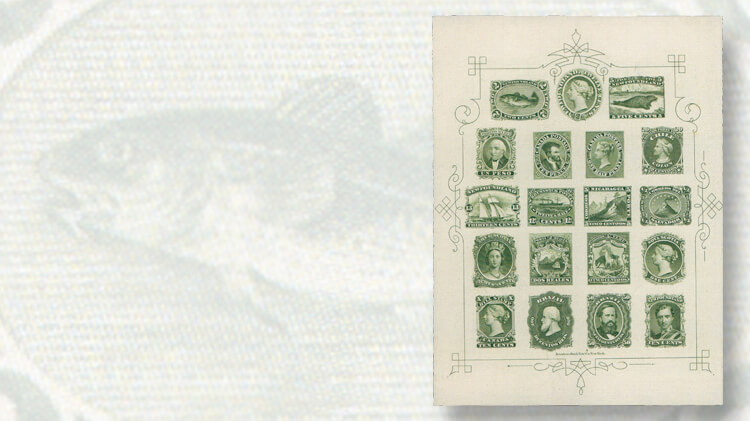 One highlight of the sale is a complete 1868 trade sample proof sheet from American Bank Note Co. with 19 engraved designs printed in green on white India paper.

“Rarely seen intact and undoubtedly among the finest known of the very few remaining,” Eastern notes in its catalog.

The engraved designs represent issues of the province of Canada, New Brunswick, Newfoundland, Nova Scotia, and seven different Latin America countries. The proof sheet is offered with an estimate of $20,000+ in Canadian dollars (roughly US$15,350).

The sheet is one of many attractive proofs presented in this sale, particularly in the Canada provinces section.

An extensive range of Canada fancy cancels is offered on single stamps and on full covers, including a dynamic strike of the bold round cursive JEE/P’tre marking in dark blue on a 3¢ vermilion Ottawa printing with gauge-12 perforations (Scott 41).

The lots from the upcoming Eastern auction are described and illustrated online, with online bidding options available.